BubTar is asking EVERYONE whether they believe in Santa or not. He's scientifically minded and because the Santa-hypothesis can't actually be tested to his liking, he's having to come at it from a different angle. He's getting lots of mixed reviews, lots of adults saying, "YES! SANTA IS REAL!", some kids saying, "Santa isn't real!", and some kids saying, "Yes, he's real! Who else can sneak in my house and give me presents?" In spite of these mixed answers, BubTar still believes. Do you know why? He has what he believes to be real, incontrovertible proof in favor of St. Nick.

Do you remember when BubTar lost his first tooth? He was SO EXCITED! The next day after the Tooth Fairy absconded with his tooth, he was heartbroken, a pitiful sobbing mess. He deeply regretted selling something so precious as his very first tooth to a complete stranger...and it was gone FOREVER! It was very sad. However, you might recall that Santa Claus, being the wise and all-knowing man that he is, worked out a deal with the Tooth Fairy in which the bemourned tooth was returned to its owner on Christmas morning. This was a most impressive feat. 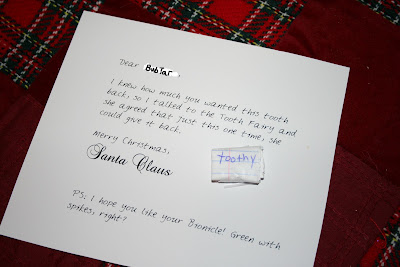 Recently I overheard BubTar on the telephone, asking his best friend whether or not he believed in Santa, he listened and then he said, "Well, I believe in him, because this one time...I sold my tooth to the Tooth Fairy and Santa got it back for me! He HAS to be real if he could get my tooth back!"

Oh, that Santa is a rather smart ole' elf, isn't he? Impressive, I have to admit. Impressive.

That Santa / Tooth Fairy connection is a strong one, I hear. Great thinking on both of their parts!

I'm relishing every bit of the magic this year because I've got a bad feeling my own Mr. Curious will have a different opinion of Mr. Claus by next year.

well done mama!
also thank you for giving me the heads up on the tooth debacle so I didn't make the same mistake!

The power of magic! You guys have some awesome fairy creatures down south.