The Christmas postmortem of 2009

The short version: It was wonderful!

The longer version: It was wonderful! I'm currently writing this on my new netbook from my warm and comfy bed while watching old episodes of Dawson's Creek, so that tells you what my big gift was. I also got a Garmin for the minivan...oh so suburban are we. The children are happily playing with their brand new gifts (there were many and they are in heaven) and Josh is at Academy scoping out goodies to buy with his gift card. Later today BubTar and I will go to Barnes and Noble so he can by a guinea pig care book with his $65 worth of BN gift cards and then we might be having mexican food with my parents for dinner.

Santa brought BubTar a big castle, complete with knights and a dragon. He also acquired several new science kits, books, board games, a Didj and a couple of games, a Nerd dart tag game, and the aforementioned Barnes and Noble card, among other things. He was in geeky heaven! He kept hugging me and exclaiming "Thank you!" When it was all said and done, we asked what his favorite gift was and he said, "EVERYTHING!"

KayTar received a Barbie pet vet set from Santa. She also got the Disney princess musical vanity from us, a deal I got on Black Friday for 50$ off and we couldn't resist. She got lots of girly things, board games, stuffed anmials, a baby doll, Barbies, costumes, jewelry...all kinds of magical pink stuff. Her room looks like the pink aisle at the toy store. Her birthday is in two months and I can't imagine what we'll get for her or where we will put it. The highlight of the Christmas experience with her was at Christmas Eve with Josh's family. She opened a Barbie 3 Musketeers Viveca doll and SQUEEEEEEEED and jumped up and down before saying, "Oh my, this is just a dream!" and faux-fainting onto the ottoman. My father-in-law got it on video, so I should be able to post the whole thing soon. It was so hilarious!

At the last minute, well, two days before Christmas actually, Josh went to the pet store and fell in love with a guinea pig. We had just enough left in the Christmas budget to get the guinea pig and all of the goodies for him. So we did! We kept it hidden in my closet in the bedroom for a couple of days and gave the kids strict instructions to stay out of our room...we also put up the baby gate. We wrapped a present (a ball and house log for the guinea pig) and addresses it to G.P. and after everything else was opened, we asked BubTar who it was for. He was puzzled and we suggested he look the present over really well. On the underside of the gift, there was a map to the cage of the guinea pig. BubTar followed it and TA DA! There he was. The reaction was somewhat lackluster...I mean, they are THRILLED with our new pet, but we were expecting some more of that SQUEEING and it was more like quiet amazement. Josh and I have been insanely excited since we bought him, so we expected more fireworks. GP is now named Gizmo and we are working on a P middle name so we can keep calling him GP if we want. Puccini is the front runner for the middle name currently.

As far are celebrations go, on the 23rd we had dinner with my parents and nieces and nephew and exchanged gifts between the cousins. On Christmas Eve, the Elves dropped off their traditional early Christmas gift, new jammies and a Christmas DVD. This year I was busily playing video games with BubTar when they dropped it off and Josh was at work. They must REALLY be magic! Then, we had dinner with Josh's family and opened gifts from his grandmother. Then my parent's spent the night, as they do every Christmas Eve. Santa dropped off the gifts (unwrapped and ready to go at our house, I think I heard his elves cursing in the night as it was no easy feat to put things together this year!) and we opened our gifts and my parents gifts first thing in the morning. BubTar woke up at 3am and my dad kept his busy for 2 hours until 5 when he woke the rest of us up. After we were done here, we went back to Josh's parents to open with them and Josh's siblings. We came home and rested and in the evening we had takeout from Denny's and our best friends came over to exchange gifts with us. We gave them bartending goodies and they gave us three new super fun games and between the two sets of gifts, our New Year's Eve celebraion is rapidly taking shape!

On to the cute kids...I know that is why you people really stop by here. ;) 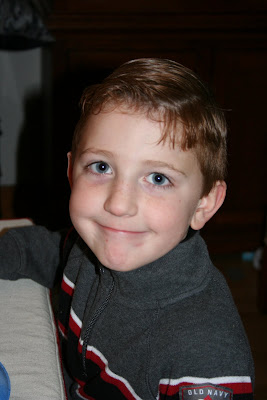 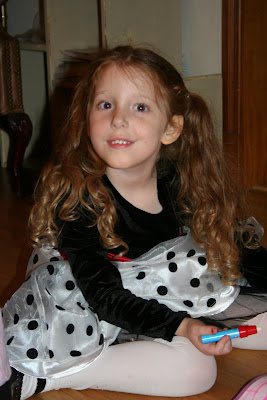 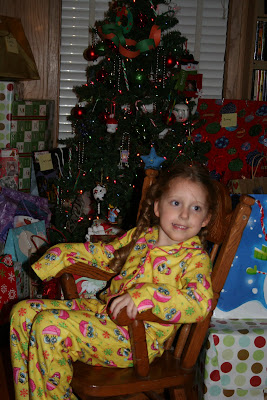 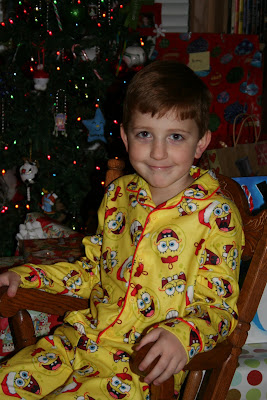 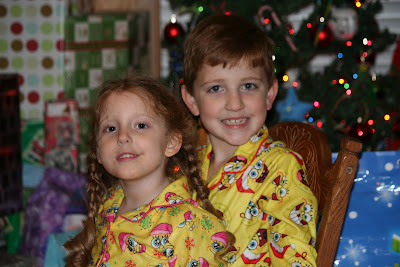 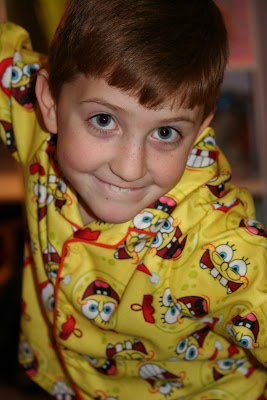 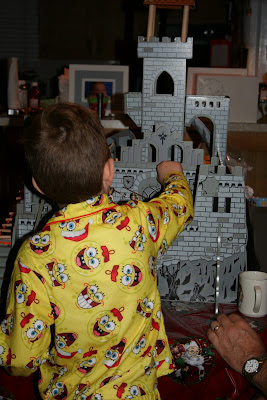 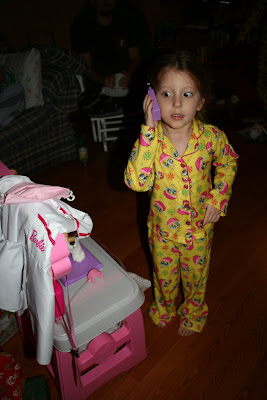 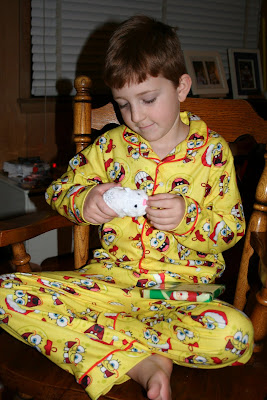 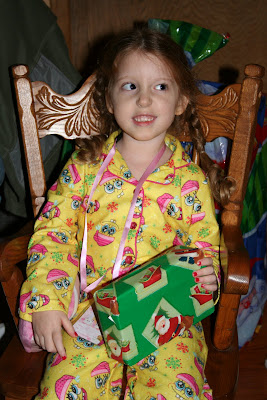 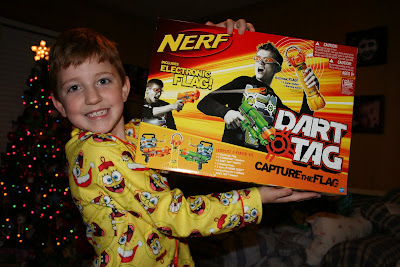 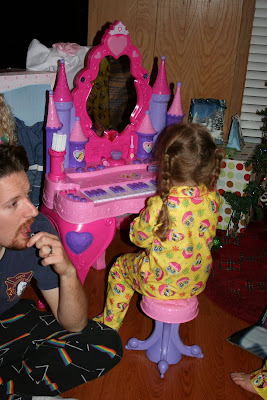 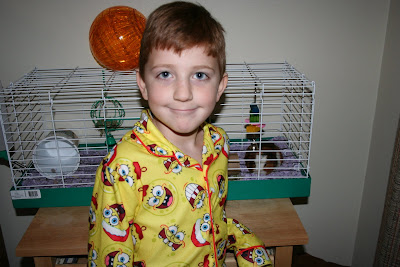 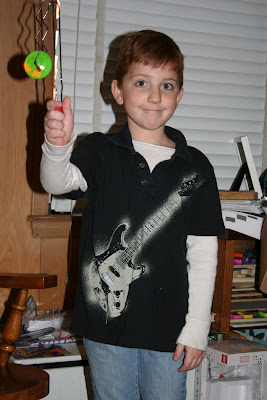 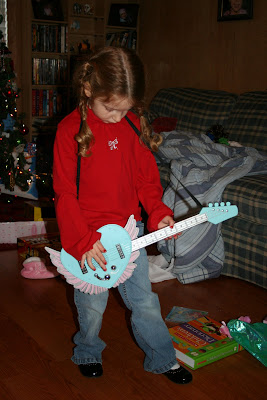 Hope your Christmases were just as wonderful as ours!
Posted by Kyla at 11:54 AM

Merry Christmas! Yes I'm am slowly changing some things around. Want to separate the Dr from the photos!

So cute, especially in the new pajamas.

and Gizmo is a great name for a guinea pig.

Please visit http://www.guinealynx.info/main.html
to learn more about your new guinea pig, Gizmo! From the picture, it seems like the pet store sold you a lot of junk that you don't need, plus that exercise ball is dangerous for guinea pigs.

Guinea pigs are not as flexible as some other small animals, plus their short legs and long bodies can lead to back injuries in balls. Guinea pigs also do better in pairs and in larger pens or cages than the one seen in your picture. They also need to be free-fed hay and plenty of fresh vegetables as well as a good quality guinea pig pellet and fresh water.

Guinea pigs make great pets!! I'm sure you want to do the best for your new little friend.

It sound wonderful! And the kids look thrilled! Have fun with the netbook!

Lin: Thanks for the advice! BubTar bought a nice book on guinea pigs at the bookstore with his gift cards and after reading we realized the ball was no good! We're making a trip to the store today to return it. We've got hay and fresh veggies for him as well as the pellet food. We're already talking about a little buddy for him, too. :)

Great photos - KayTar's hair is really gorgeous! And I love their matching SpongeBob jammies. So cute!

i dearly love the picture of K with the phone - the eye rolling makes it.