Yesterday I took KayTar to the allergist to try and get to the bottom of the Botox for Babies situation. It was our first time meeting the doctor and I was pleasantly surprised. She was intelligent and warm and totally captivated by KayTar, which is always a bonus. KayTar was in true form and had the doctor in stitches. At one point, while she was taking her history, she asked about our pets, what kinds, whether they were indoor or outdoor, and after I answered the questions, KayTar said, "Oh Mom. Now you're just making fings up." It was so hilarious! The timing was superb. She was on a roll that entire appointment, really. She charmed them all, the receptionist, the nurse, the doctor, the whole clinic.

It has always been interesting trying to introduce new doctors to KayTar's medical history as it is impossible to wrap it all up with a nice little diagnostic bow, but these days it is even trickier, because there she is in all her chatty, smart, hilarious glory, while I'm listing her totally invisible conditions. Brain lesions. Profound unilateral hearing loss. Feeding disorder. Gross motor delays. Chronic constipation. Neurological episodes. Asthma. A year ago, when she was globally delayed, you could see there was a problem at first glance...but now, there's not a trace of it left, not until it is pointed out. She's left the world of cognitive delays behind and impresses just about everyone she meets with that little noggin of hers. It might work a little differently, but it sure works efficiently. Her differences have by and large left the developmental realm and are squarely in the medical realm now. I have to admit that it is kind of nice that her challenges aren't immediately visible these days, but it does increase the number of inquisitive looks I get when rattling off her medical history.

Once we finished going over her sordid history and KayTar had satisfactorily entertained the physician, we got down to business. KayTar's initial reaction puts her at a high risk for anaphylaxis, because it involved two body systems, her skin (swelling) and her gastrointestinal tract (vomiting). The allergist didn't feel comfortable doing skin testing because of that, so she came up with a short list of allergens to be tested via KayTar's blood. She said that the Peanut Butter incident didn't necessarily rule out a peanut allergy, because the Benadryl might have occluded the reaction. So the short list was: peanuts, all tree nuts, and eggs. She also called in a prescription for an EpiPen Jr, given the high risk of anaphylaxis (does KayTar do anything small, ever?).

This morning I took KayTar to have her labs drawn at the hospital and it wasn't too traumatic. There were a few tears, but it didn't take three of us to restrain her like in the olden days. I don't think she's had blood drawn (outside of a finger stick or draw through an IV) since 2007! That is forever in 'Tar time. The results should be back in 1-2 weeks and we have a follow up appointment on the 20th to touch base. I'm hoping the tests do show something and give us a clear cut allergen to avoid, because otherwise, High Risk of Anaphylaxis will be lurking around every corner and in every bite of food. No thank you, I'd prefer to know what the enemy looks like and steer clear of it. The single lip swelling incident was more than enough for me, and after that day she momentarily couldn't breathe, I'd be perfectly happy to never see her in any kind of respiratory distress again. So hopefully, unlike every other test that has been run on KayTar, we'll get some easy, clear cut answers just this once. 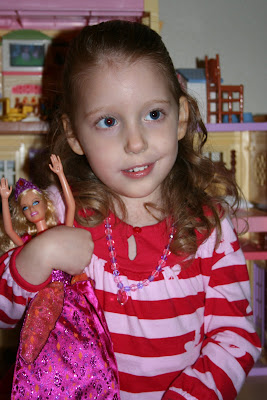 I really hope the tests give you the answers you seek.

BTW - I can't believe how grown up she looks in that photo!

Oh man- that was us 8 months ago. I carry the epi pen everywhere. Good luck I hope that it's good news. If you need help deciphering the IgE levels let me know.

I will hope for answers for you, at least one answer would be nice, eh?

Oh poor thing, that must be so difficult for all of you.
I can't believe how many children have food allergies these days.
So many of our friends have kids with severe food allergies and my heart goes out to them (and you)
I can only imagine....
I hope the tests provide you with some answers.

Your daughter is beautiful btw.

Lovin that photo of the princess with her princess.

I hope you get some definitive answers with this testing!

I, too, hope the answers are clear and quick.

Praying for answers for your sweet girl. She is a doll!

maybe this will be the first time for some real answers. i hope so!

It's unreal how much I can relate to practically every single post you write. Our kids are so remarkably similar. I really hope the test works better for you. We also had to avoid the skin test and the blood test showed no allergies, even though he stopped breathing after being stung by a bee and vomits immediately after ingesting any dairy or wheat. Ugh.

She's getting so big! That hair is gorgeous. What a doll baby.

I hope you get some clear answers soon, too.

Awww! Beautiful and delightful! What a combo! Hoping for some answers for you guys too! Little Man has a couple of scary allergies, but they are to drugs, so no epi pen for us thank goodness!

That kid. She is so spectacular. And you as parents. man she is lucky to have such smart people around her.

You're right though, she doesn't appear to have any strikes against her. Hopefully those tests reveal something.

Wow, what a beautiful child. I'd be taken in by both looks and smarts, were I her doctor.

Wow, what a picture and what a doctor's appt. Clearly they're nothing new for you! I'm sorry she is having to deal with this, but it sounds like your dr is good. That's always nice!