Yesterday KayTar had an allergist appointment to get her RAST results.

She tested negative for eggs and tree nuts, but borderline for peanuts.

Negative is LESS THAN .35, her peanut level was .35 EXACTLY.

With such borderline results, there isn't an across the board recommendation for avoidance. It seems to be our decision in the end, so long as we are never without Benadryl and her epi-pens. RAST levels aren't always indicative of the strength of a reaction and the deciding factor is what happens when she actually ingests the allergen, which is also a little unclear.

She reacted strongly to the Blizzard; peanuts are the only allergen we could place at the scene of the crime and also the only allergen she showed any response to. She has eaten a small amount of peanut butter once since that time, I gave Benadryl immediately through her g-button, and she never reacted (though, she did have runny stool the following day, but that could have been from another cause altogether). The pediatrician said that she likely would have had some reaction if peanuts were the culprit, but the allergist said that sometimes Benadryl is enough to occlude the reaction if given quickly enough.

If the decision lies with us, I think we are leaning towards avoidance at this point in time. I do feel reassured that we have the epi-pen, in case something does happen, but I never want cause to use them. Even if there is a slight chance of reacting negatively to peanuts, I don't want to offer them to her. At the same time, I'm a bit torn because her diet is already so severely self-limited, saying no to any food seems like sacrilege. In the end, though, I think the possibility (even a very slight one) of anaphylaxis trumps my qualms about limiting her already limited diet. We'll keep an alternative, equivalent product in the house in case she wants some, but Josh and I are both more comfortable avoiding the (ever so slight) possibility of a negative reaction.

As we laid in bed last night, we had a good chuckle about the results. It is just like her to give us a little something that indicates a problem, but she never gives up enough information to yield an answer with any kind of certainty to it. Take this one instance and multiply it hundreds of times over and you've extrapolated the KayTar experience, abnormal yet nonspecific to the Nth degree. 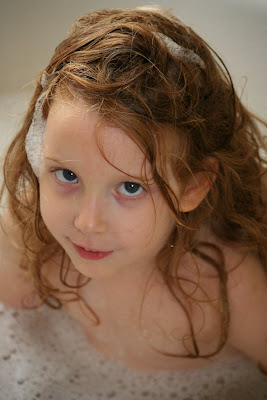 Knowing she'll be avoiding them will be one less thing for you to worry about when you're apart...I think it's a good decision!

And then she looks at you like "you're never gonna figure me out".

Can you use tahini and/or almond and/or casher butter as a substitute for now and then retest her again in a year? Miss M will eat tahini right off the spoon as if it were peanut butter

That Kaytar...always an enigma...well, she makes life interesting, doesn't she?

Sheesh! Why does it have to be on such a scary allergy? Avoidance sounds good to me too!

Give her a jar of Nutella, in case she decides to break into the peanut butter again. It is made with cocoa and hazelnut and I love it, even though I don't like peanut butter.

Peanuts are pretty hard to avoid, though, with all the things that have a least of trace. Has she eaten other things that might have peanuts in them without a reaction?

Kyla - you always leave me amazed at your strength. And - your intelligence. That little girl is so lucky to have a mom who will fight for her like you do.

That pretty lil lady sure likes to keep you guys on your toes, huh?

I was going to suggest almond butter or cashew butter both of which are really yummy and not as strong flavored, IMO, as tahini.

That girl is such a mystery! I'd be like you and avoid the peanuts for sure.

Our dog had anaphalaxis (I'm spelling this wrong I know) when she was two years old - just fell out in the backyard - and we rushed her to the vet ER and they revived her but we never figured out what it was that got her. She's eight now and I still half-expect to find her keeled over in the backyard each time I let them inside the house.

That is the worst feeling ever and she's my dog ... I can't imagine the feeling if she were my child.

Your strength and wisdom always amazes me!

J had hives yesterday. I went a little crazy!

She is an enigma, through and through! I wouldn't worry about depriving her of peanuts/peanut butter. We discovered sunflower butter last year and are totally addicted to it. Better safe than sorry, and as Mad said, you could have her re-tested in a year.

Other people always seem to say exactly what I want to say first (and probably a little better), but I totally 2nd AJsMom. Funny coinkydink. :)

There is something about that experience of better than bad but not quite good.. makes me crazy.
I am just willing the universe NOT to make Kaytar anaphylactic. It just is not fair for you Kyla.

she really is the cutest little puzzle, ever

Oh, K-Tar, you little trickster!
I would avoid it whenever possible, too, because that is a scary scenario even on a kid without other health concerns.

Ha! Mimi did Madonna. Love that.

The good thing? Peanut exposure is really easy to avoid now that so many kids have the allergy. There are lots of alternate products with the peanut safe emblem.