KayTar was healthy and happy, and we were all able to enjoy all of the festivities together! The kids got what they wanted, too, as you can see. 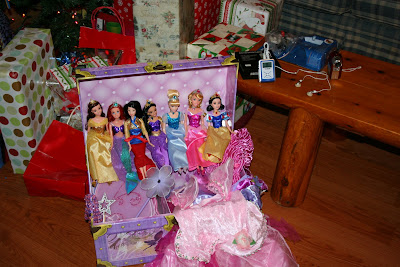 From Mr. SC (as BubTar addressed his letter), KayTar got a set of the Disney Princesses and a dress up trunk and BubTar got a camcorder (small, but at 30 fps it is actual video quality!) and a little mp3 player. From family, they got way too much...our house is covered in pink and purple and glitter, princesses and dresses and Barbies all around...and on the flip side, the floors are covered with Legos and Star Wars and Transformers. I love Christmas day, the work is done, everyone is pleased, and a hush of new toy joy falls over the house that is pierced only by squeals of delight. Lovely. 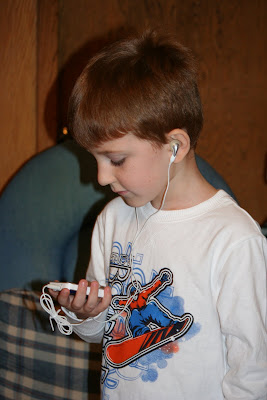 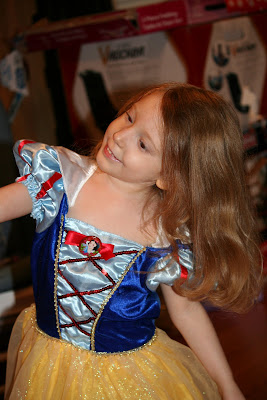 Yesterday evening, Josh ran an errand and while he was gone I was watching the kids and doing laundry, taking trips to the garage to start and change the loads and trips to the bedroom to lay out the clean ones. Josh arrived home and called my attention to something. KayTar. WITH THE PEANUT BUTTER JAR.

Since the Swelling Incident, I've been ridiculously careful about peanuts and peanut containing items, our Christmas candy supply speaks to this (have you any idea how many things "MAY CONTAIN PEANUTS"? Too many.). We have informed the extended family, taken precautions with holiday meals, and steered clear of everything with the possibility of peanut contamination. After all of that, there she was ON CHRISTMAS DAY with a jar of peanut butter in one hand, the other hand stuck in her mouth, slurping peanut butter from her finger. I. almost. passed. out. Josh says, in his typical, practical Josh manner, "Well, I guess this will be the allergy test."

I dosed her with Benadryl immediately and then tried to sit still as my nerves attempted to claw their way to the outside of my body. Peanut! Allergy! Swelling! Puking! Anaphylaxis! I watched her and waited. She fell asleep (thanks to the one-two punch of Benadryl and Christmas exhaustion) without complication and I continued to check her often, for hours. No swelling. No puking. No reaction. I don't know enough about food allergies to know if Benadryl is strong enough to prevent a reaction when given immediately (before the reaction begins) or if this means it isn't peanuts at all.

Part of me is hoping that it means it isn't peanuts at all, because the sheer volume of peanut containing items is daunting. KayTar eats so little as it stands that saying NO when she wants to eat something feels profane. At the same time, if it isn't a peanut allergy, it means it is something else, something unknown, and we'll have to figure that out, which might be more difficult and will probably still lead to us saying NO to certain foods. If we don't figure it out, I'm going to worry about every bite of food that enters her mouth, always waiting for something bad to happen...I don't want that sort of shadow hanging around. I don't know what the best scenario is here, but I do know that the good news of the moment is that she didn't react yesterday, for whatever reason, and that was a nice little Christmas gift, all on its own. 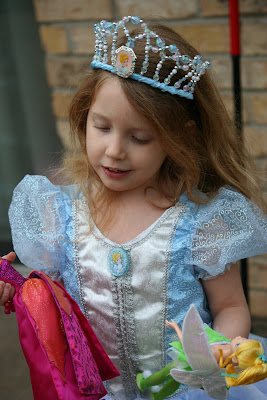 I really do hope that she has no allergy to peanuts whatsoever. You guys deserve to have one thing be easy, you know?

Phew! Peanut allergies are scary. We thought Charlie might have one a while back and you're right... Peanuts are in EVERYTHING. Looks like a magical Christmas for your family. Well deserved too!

i hope it isn't peanuts b/c that is so hard to find processed foods a that are safe. i hope you get a solution soon, but in the meantime have a happy day 2 of christmas!!

while she is still insured, can you get an allergy blood test done? it isn't definitive, but it can tell a lot.

I am so glad that nothing resulted in the peanut butter mishap.

Also, I am so happy that you and the Tars' had such a great Christmas!

Since I have the weirdest list of things I'm allergic to I might be able to give you a partial answer. The benedryl could very easily have worked. Also she just may not have had an allergic reaction this time. But my guess is that she isn't allergic because not showing any kind of reaction is rare in children once a food allergy manifests itself.

Glad you guys had a great day. After all my whining our day went great.

The Snow White picture of Kaytar is divine. I got what I wanted for Christmas too. Happy and (relatively) healthy all around. Glad Kaytar is OK.

Well at least you found a high protein item she likes? :) Glad to see NO reactions! Whew! I must say your babies are the cutest kiddos EVER! Bubtar is a young man. Wow. He has grown up so much! Kaytar. ... the stunning princess on the block!

From what I know about peanut allergies a dose of Benadryl wouldn't have been enough to ward off a reaction.

Since she had that reaction after eating a DQ ice-cream (if memory serves) it should be easier to isolate the ingredients, right?

I confirm what the pp said - if Benadryl worked, you're dealing with a very mild peanut allergy. It's likely it's not peanuts. Peanut allergies tend to be BAD. Benadryl would not stop the reaction very much at all. Good luck finding the culprit - my little guy has lots of food sensitivities, but luckily he's still exclusively breast-fed, so I'M the one who has to watch what I eat!

The pediatrician basically said the same thing, if it was a nut allergy, then she still would have reacted. It must be something else!

Ack about the allergy business. But she makes a splendid princess!

And look at the princess hair that she already owns!

Maybe it was a pea. If you remember the story about the princess and the pea :)

I'm so happy that she didn't swell for Christmas...although she would have looked mighty sparkly if she'd done so! Have you heard of the allergy tests where they prick your back and then can tell you exactly what you're allergic to and to what degree? I believe my sweetie had one when he was finally diagnosed with Lupus, and it's made is life so much easier. Well, except that he's allergic to TONS of food, but on the flip side, there's less use for the epi pens...

Gigi wants very badly to come over and play princess because, in her words, KAYTAR HAS EVERYTHING.

Dear Kyla,
It would appear you have a full-blown girlie on your hands. She wears the mantle well.

Princess and the Peanut Allergy.

Look at her in all her finery and you tell us of her STICKING her hands in a peanut butter jar.

Of all things. Was she put here to put you into food hell or can she just slay us with her beauty.

Oh, I love the photos! I hope it's not a peanut allergy ... those are so awful, that it's almost better to be in suspense for now than to know for sure that it IS peanuts, you know?

Well, all is good and right with the world then - with all those princesses! :) I'm glad everyone got what they wanted.

How beautiful they are!!

Both of my girls have very close friends with peanut allergies. Such a hard thing, food alergies. Hope you figure it out.

Glad you had a great Christmas. I am a little jealous that you got to hang out in your house on Christmas day. We had to travel to see the fam, which was fun but totally exhausting.

I gave my sister (bushbabe)'s daughter that exact same dress for Christmas!!!

I do hope that non-pb allergy was your Christmas gift from the universe.

I'm not an expert either, but I do know that if Benadryl was enough to hold off a reaction, then it's not the scale of reaction that would be fatal, because an ex of mine was allergic to peanuts, and there was a time or two he used Benadryl to hold off the reaction until he could get to an epi shot, but still needed that shot. By the same token, sometimes reactions can get worse each time. Did she usually eat peanut butter before? If so, at this stage, that's likely not it. If not, it might still be worth holding her off of it until she's tested. Fingers crossed that's not it, because it's a pain, for sure, though awareness and increasing numbers of kids with it mean more and more stuff is peanut-free now, thankfully.

um, peanut butter from the jar, ummmm.
Oops, sorry.
Here I am, doctor me, and I don't think it's peanuts. I really don't. You don't get to rub yourself in peanut butter and walk away from it if you're allergic. Can she not be tested? It would be way cool if she loved and could eat peanut butter, right?

I have a peanut and tree nut allergy and if I accidently eat something that contains one of those and I take benadryl immediately sometimes it is enough to stop the reaction. So don't write off peanuts yet. Just always keep and and epi-pen handy. Try Sunbutter. It's ma benadryl de from sunflower seeds (I swear by this and it's amazing). The taste isn't too far from peanut butter and while when you first get it, the oil is on top and separated, just stir it some and then it is the same consistency of peanut butter. I know with food aversions (I work with an autistic child with severe food aversions) having the same consistency is important. I hope this helps. And by the way- she is BEAUTIFUL.