At least it is festive!

A couple of days before Thanksgiving (November 23rd), KayTar's biopsy site started to get inflamed. The scar is shaped a bit like a needle, the length of it is a straight line, but the end has had a harder time healing and resembles more of a loop, like the eye of a needle. That little loop is what had started to look inflamed. I sent a photo to the pediatrician (it is like she has her very own subscription to Disgusting Photos Weekly with KayTar as a patient), who recommended topical antibiotics because at that time, it was just the beginning of a surface infection in one small area. By the evening of the 25th, there was a small, spreading warm red area coming from the length of the scar. I sent more photos and we went in for an appointment the next day. She took a culture and started KayTar on Bactrim for the cellulitis and continued the topical antibiotic for the abscess. By that evening, the cellulitis area had more than doubled in size, extending jaggedly from the biopsy site. We were put on ER watch, if it didn't stop spreading within 24 hours of the start of the oral antibiotics we were to go in, and we watched it carefully on Thanksgiving Day. It did stop spreading, and eventually it retreated, though when looking at her leg I can still tell where the worst of it was because the tissue has a slightly different hue. A week or so later, the culture came back and it was MRSA, which was what it was suspected to be. Before her surgery, she had folliculitis on her wee bottom, and although we had treated it and cleared it up before the surgery, the pediatrician thought a bit of that colony had migrated over to the leg and found a nice new home, marched right in through the opening and set up camp in her thigh.

On Christmas, I noticed that the small opening of the scar (the origin of the initial infection) had scabbed over, which was odd because after the MRSA infection, it healed nicely and there was no scabbing. The next day, there was fresh redness surrounding the little scab, I started applying the topical antibiotic again. By yesterday, it was getting a bit puffy around the edges and oozing blood. (Nice visual, right? You're welcome.) I sent the pediatrician a photo (see, Disgusting Photo Weekly) and she said to continue the topical and add in another round of oral antibiotics, so we started those last night. She said that staph tends to reoccur in the same area at the slightest irritation and we might do this a few times before it finally clears up for good. Dandy! Hopefully this time we started treating it early enough so that we don't get to the spreading cellulitis stage, because it was a wee bit unsettling, waiting for the medication to turn the tide in her tiny little leg. (Fun fact, the week she had the initial MRSA infection I had just had an exam over bacteria and 7 full index cards were dedicated to staph...it is one nasty little pathogen. The one thing I did not learn about staph in that course was just how much it enjoyed spending the holidays at our house!)

Here is a little public service announcement: Never email your pediatrician and jokingly say, "Merry Christmas! Hopefully I won't have to bother you until the new year!" Because then on Christmas Day your child will get into the peanut butter she is possibly allergic to, prompting you to email her (though, you might wait until the day AFTER Christmas to send this, to be kind), and the following day your child's MRSA infection will recur, prompting you to send yet ANOTHER email, complete with disgusting photo. We sure are lucky she loves us. 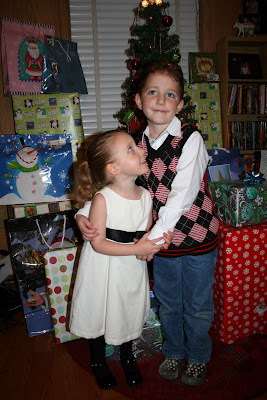 Children in festive clothing; totally irresistible to staph. Who knew?
Posted by Kyla at 9:50 AM

I almost feel bad about tagging you. Almost.

I don't know, Kyla. Maybe all your photos are just encouraging the bacteria. Did your course say anything about bacterial narcissism?

Here's hoping the New Year brings your family much much health and happiness.

Ugh. This I know. When I shattered my leg (tibia and fibula both) three years ago, I contracted a nasty staph infection at one of the sites anchoring the external fixator. Staph infections are BEARS.

Hope it's cleared up soon.

Eesh. I hope it goes away fast and STAYS away.

That little Kaytar! She is gonna keep you on your toes wheather you like it or not! I am so glad you have such a great ped!

And what a wonderful pedi - to be so available by email!

That photo and your sense of humor are irresistible!

Hope she gets better.
Thank goodness for a (better than decent) doctor!

I once had cellulitis...bad story, elephant legs, chickens running through hospital, it got worse. I was in quite a poor country though. Stay at home for treatment!

One thing after another for you, eh? *sigh* I hope she's better by now.

I've been offline for week and am just getting caught up on the stories. Never a dull moment in the Tar household! The kids look beautiful in the pics and I'm so glad to see Kaytar bounce back in time for Christmas. She's one helluva trooper. Oh, yeah your ped totally rocks!

Despite the hard work I'm sure you are a pleasure to have as a family!

I really hope I am the only person reading this thinking ME TOO!!!!
Except the cellulitis is in Js eyes and her doc doesn't have email.
I realised after I paged him saturday and he asked me repeatedly to describe how red and how puffy her eyes were that next time I would be sure to just ask if I could email a photo.
Hope you all are feeling better soon!
I was hedging about calling again but you've just convinced me.

ugh ick! Well, hopefully this second round (or is it third?) round of antibiotics will clear that nasty little infection right up!

Ergh! I hope it goes away soon. Staph can be so nasty to get rid of -- I've been trying to get rid of an antibiotic resistant strain in my sinuses since, oh, February. I had sinus surgery last month and thought we'd gotten it. Guess what I got for Christmas? Another sinus infection! Nasty buggers.

ok, alejna totally cracked me up.