Read all about it!

A man recently received an automatic 3% cost of living raise and it has thrown his family into a crisis situation. This small raise puts his family income roughly $20.54 above the SCHIP income guideline for his state. His daughter is uninsurable by private insurance standards due to multiple health conditions, and the family had exhausted all options before working to get their children enrolled in the SCHIP program. His wife works with the Children's Defense Fund, sharing their story in hopes that people will listen and see the need for changes within our state and national children's insurance programs. One of the most sought after changes is a buy-in program, so that families above the income guideline but unable to financially or medically qualify for private insurance, have an option. If this legislation goes through in the next session, she will feel satisfied knowing no other families will have to experience what hers has had to experience, not once, but twice, this year. The family has not lost their coverage yet, and are currently hoping for a Christmas miracle as the man speaks with his boss once again about the financial aspect of the problem. The first time the man requested a pay cut, he was ignored despite explaining the tenuous at best situation of his daughter and her medical needs. The second time he was told no. We all wonder, can they be so cold hearted as to deny him a third time, especially around the holidays? We wait with bated breath to find out.

A young girl named KayTar had multiple surgeries in early November. Her recovery was easy despite persistent antibiotic-induced diarrhea, but the week of Thanksgiving, she developed a MRSA infection at her biopsy site. MRSA, or methicillin resistant staphylococcus aureus, is quite aggressive and had her parents wondering if they might be spending the holiday in the hospital. Thankfully, the oral antibiotics turned the tide just in time and the family escaped such a fate. Late last week, she began to develop granulation tissue around her stoma site. Granulation tissue is fibrous connective tissue that develops outside of the body, in an attempt to close a wound the body feels should not be there, such as a stoma from a g-button. Friday it was barely visible and by Sunday night, it was almost interfering with the ability to close the button effectively. This is being treated with a round of topical steroids which will hopefully heal it nicely. If not, it may be treated by chemical cautery with silver nitrate. Yesterday, for the first time since her surgery, the young girl has fallen ill. This morning her first words were reported to be, "I fink I'm going to throw up." Her parents are interested to find out if this recent run of health can be attributed to a successful surgery or if it is due to the near nonstop antibiotics the girl has been on since her surgeries a little over a month ago. Only time will tell, but something tells me this might be the first of the many infections she will experience throughout cold and flu season.

A hunter recently brought home his conquest and decided to make jerky. He slaved over the dehydrator all day long, just waiting for a taste of his delicious trophy. Evening came and it was finally finished. He put it into a ziploc bag and left it on the kitchen counter to cool. The hunter then laid down on the sofa and quickly fell asleep. Hours later, he awoke. He could not find the jerky anywhere. He inquired of his son, "Where is the jerky?" He claimed, "On the counter, I only took one piece!" The man could not find the bag of jerky, but this is typical. The hunter might be able to stake out animals, but he is wholly unable to find things in his native environment. His wife sighed with exasperation. "I'll find it." She had to look no farther than where she stood, though. On the floor was an empty ziploc bag, with a small hole torn in it. "I found it. It is on the floor." Realization dawned on the hunter's face, "Nooooo. Nononononono! CAT! DOG! NOOOO!" The delicacy of his handiwork, stolen and eaten by a cat and dog who understand the true power of teamwork. The hunter mourned his great loss and can still be heard mumbling under his breath, "Stupid cat. Dang dog." many times each day.

We attempted to interview a local college student about her upcoming finals, but she just stared at us with her crazy, twitching, exhausted eyes and handed us this photo before stumbling towards the nearest coffee shop. On the back she had scrawled, "And this is only ONE of the stacks." That says it all, doesn't it? 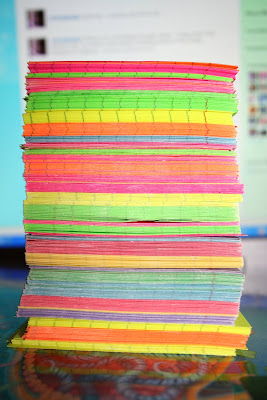 I still find it strange that the employer insists on giving a raise that is not wanted. And I still find it terrible that you have to turn down raises because of the insurance.

Get through the finals...wishing you luck and a Christmas miracle.

At least you find dark humor in your trials and tribulations.

The thing about the employer is kind of mystifying...

PS - I sent an email to MomsRising with a link to your blog. Don't know that it'll help, but it made me feel like I was doing a little something.

He, he, he. The hunter who cannot find a ziploc baggie of jerky. I am laughing.

Laughing so as not to cry.

You would think that the SCHIP would get an automatic living raise bump in it's income ceiling, too.

Ewe: It will. The new levels are establish in February and implemented in March or April, I believe. Not quite soon enough for us, though.

You are keeping everything amazingly together for all the trials your family is going through. I'm hoping for a miracle for you, too...

i can't believe that if someone wants a pay CUT, less money, they would be denied that. it seems win win (in a weird way)--the company saves money by paying less to the employee and your fam gets insurance. crazy.

The whole thing with the employer is so mystifying! Why are they so stubborn about it? Why can't they match his raises with the timing of the SCHIP cost of living increases? Crazy.

The hunter story left me laughing. Pets are so much fun ;-)

Ugh, what a lot you have going on right now!! I am so sorry. The insurance thing continues to anger me, but you know that already. Hang in there.

You are so creative Kyla. Your writing is always in top form, no matter what the stresses are you are under you can crank out great posts like nobody's business. You'll kick ass on those finals, I'm sure of it. Speaking of ass kicking, I'd like to kick me some Texas ass right now... a certain employer is just beggin' for it.

Oh Kyla - every silver lining has a cloud with your medical insurance drama, doesn't it?

I hope the employer can see some sense and your baby girl gets well soon.

Wow.
Hang in there, Mama.
Somehow, it'll all be Ok.
And he'll make more jerky :)

OFF on all counts, except the jerky. Your husband needs to rig up something better than a kitchen counter.

This post had me angry, sad and laughing...all within a matter of minutes. Excellent writing, by the way!

very newsy - I'm hoping for good endings to all of those stories. well, I'm not sure there's anything left of the jerky story... but the rest of them! :)

Ugh! That's terrible!
This is IN NO WAY comparable, but last year, my husband got an automatic raise, which put us into a higher tax bracket - which meant that we had LESS money every pay cheque. Gee, thanks.

That's all I can say.

Well yay for the last one, at least. Vacation! (from school, I mean.)

I'm in awe. And through it all, you're finding the strength to study and laugh and share . . . in absolute awe. I would be a puddle.

Banging head on keyboard in frustration my friend.

Tell Josh I suffered a similar fate when I shot my first wild turkey. Huge feather plume that I intended to hang in my office was ripped to shreds by the neighbor's dog. It had been in our garage curing.

your index cards are art

I"m waiting with bated breath, too. I hope you get that miracle...

Well, as disappointing as some of this to read, it was a good synopsis for me 'cause I've been away for so long.

You take all of this so much in stride, Kyla. I am, as ever, in awe of you.

We are making jerky right now (for Xmas gifts) and although we have nephew's venison in the deep-freeze, DH bought London broil to dehydrate. I had to tell him your cat-dog story. He nodded his head, knowingly and commiserates with your hunter.

that makes me so angry. the insurance, not the jerky.