She woke up this afternoon (yes, it was after noon) and demanded a princess dress and I knew today would be a better day. It isn't great or fantastic or even quite normal, but it is better.

Yesterday, she kept down 23 ounces of Pedialyte and had two wet diapers, she was awake for about 6 hours. Today, her fever is gone and she's already had 23 ounces of fluid and we'll get at least 6 more in before bedtime. She slept past noon and took a nap shortly after waking, but she is back to herself today for the most part, (she's actually lovingly tormenting her brother right this second! "BubTar, I stole your balls! Na-na-na-na-naaa!" No, it isn't a adult version of I Stole Your Nose, she is referring to a TOY.). She's already had FOUR wet diapers today, which seems miraculous in itself. She vomited once today, after I let her have some dry toast. Eating triggers coughing jags, which in turn causes vomiting. The cough is mostly gone otherwise, but is disruptive and vomit-inducing after she has eaten anything at all. I'm not sure how to go about restarting her normal feeds as anything heavy in her stomach seems to trigger the coughing/vomiting cycle and it doesn't so much good to feed her if it will back up momentarily. The pediatrician suggested that we try 1/2 Pedialyte, 1/2 Pediasure feeds and see if that stays down and then gradually increase the amount of Pediasure. So far, so good.

The long and short of it is, she is improving, but not completely better just yet. Tomorrow we are supposed to have an early Christmas with my parents, the next day is dinner with Josh's family, the day after that is Christmas. It looks like she'll be up to enjoying all of it just in the nick of time, ready to twirl around the rooms in her party dress and show everyone her fancy "clippy-cloppy" dress shoes, to laugh and giggle and dance, everything just as it should be once again. 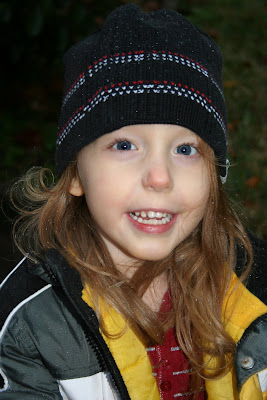 LOL on how she teases her brother. Gotta be feeling better for some good ol sibling annoying.

Happy Holidays to you all!

Oh, her smile! It is so nice to see that beautiful smile. I'm glad things are looking up.

You KNOW, that when they are torturing a sibling that they are nearly better.

Thank you for the update. It sucks being sick.

Glad she's gwetting better. You know when you care to dress up again, youi're on the mend!

YAY! Soooo glad she is up and princess-ing around again! Hooray for Christmas without the sick! :)

Go glad she's getting better in time for the holidays. Have a lovely Christmas.

Yep, I'd say annoying her brother is a sure sign that she's slowly getting back to normal.

I hope she keeps improving and is able to enjoy the holidays!

BTW, cute picture...even though it took me a second to realize she was without her super cool glasses!

Glad she's on the mend!

And totally unrelated but I just noticed and had to point it out ~ that girl has perfect hair!! She's going to be the envy of all the teenage girls! :)

Yay for Christmas miracles. And great picture, btw, she looks like such a big (and incredibly beautiful) girl!

I am relieved to hear that she should be well enough to enjoy Christmas. Please let her stay well loooooong into the New Year.

Glad she is improving - hope she continues to get better and better! Beautiful picture of your happy girl!

Oh, yay! I was hoping there would be good news, and she'd be so much better by Christmas.

I love LOVE that picture, one would never think she was so sick the day before.

The photo is actually a few weeks old, I just felt like using it. LOL!

I am glad she is feeling better! She is so very beautiful isn't she?

She's a beautiful little girl. Take care and have a Merry Christmas.

Ok I may not be the model mother but what I did this week is cut Julia's feeds in half because I was not interested in any coming back out. We alternated pediasure and pedialyte ( we used to do the half formula thing too) and just made the feeding intervals a little closer. We had a short period of dry diapers and then we just upped her fluids again.
So far so good.
I figure I don't eat when I am sick so it is ok to cut her feeds for a couple of days and aim to be back on track in a week.
So glad you managed to stay out of the hospital! I am really happy the gtube really seems to have been worthwhile.