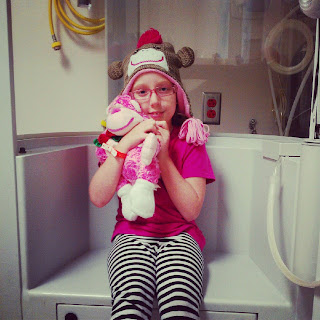 KayTar's testing did not go so swimmingly on Monday. The pulmonary lab uses a different mouthpiece than our pulmonologist's clinic and KayTar started gagging straight away when she put it in her mouth. I was able to talk her through it, though, and with some encouragement she was able to to make it through the first few tests. Unfortunately, after the first try on a test where she had to hyperventilate and then attempt to exhale against a closed valve, she puked. Puking means the end of testing in the pulmonary lab, so that was that. We did not finish the testing without bronchodilators and we didn't even start the testing that is repeated after bronchodilators are given. I doubt we got anymore information than a typical in-office PFT...and that it will likely be re-ordered for her and she will have to be NPO beforehand. It also means we finished testing WAY ahead of schedule and had a huge gap between 10am when we finished and 1pm when her echocardiogram/bubble study was scheduled.

We went over to check in early, in case they had an opening...but they never did. We went to get lunch in the cafeteria and oh my gosh, do I ever LOVE KayTar's wheelchair. It is AMAZING! She can't push herself a LOT, but she can push herself some and it makes such a difference! In the cafeteria, instead of trying to push an unruly stroller and carry food and a drink, I just said, "KayTar, follow me!" and she could! If there was a tight corner, I could use one hand to help and the chair would move with ease! Just little things like being able to hold the elevator doors for her while she rolls in or opening a clinic door for her are SO much simpler. She loves the autonomy, too. I'm SO glad we opted for a wheelchair and not a medical stroller, she is very proud of it and it makes everything a lot easier for both of us. If you have a kid with limited mobility or even limited energy/endurance and are looking for a seating solution, I highly recommend the wheelchair route if they have any ability to self-maneuver. It makes more of a difference than I ever would have imagined and I'm SO glad that Heather gave me that advice when we were making our decisions. After lunch, we just hung out in the waiting area, hoping for a turn! 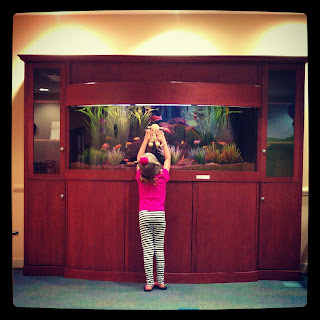 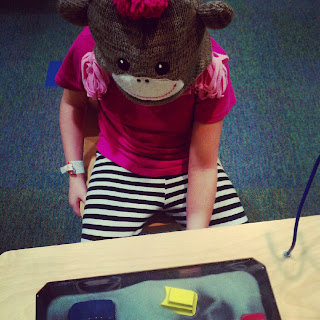 It was FINALLY our turn and KayTar was delighted to discover the orders had been changed so she did not need to have an IV. She said, "Yes! I wished it away!" Initially the orders were for a bubble study, but the cardiologist called the pulmonologist to see if she would change it to a normal echo because that should be sufficient to diagnose the problems she is looking for (which is what my wise friend Amber had told me! Mito moms always know the right answers!). The echo itself was no big deal, we just relaxed for about a half an hour while the tech looked at her little heart. I know nothing about cardiology, so I had no idea what I was looking at. I can tell you she has a heart and it was beating, but beyond that I'm clueless. I tried to get the tech to tell me if things looked mostly normal, but she was tight-lipped. Darn! I'm not sure when we will get the results, hopefully this week, though. I expect it to be normal. None of her docs have ever been concerned about heart problems and I think the pulmonologist ordered this as more of a rule OUT than a rule IN sort of test. It will be nice to get the results, though. 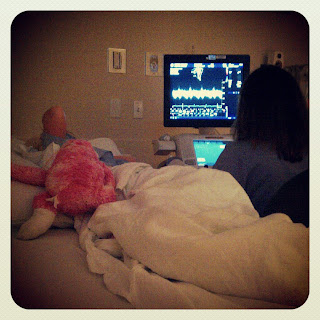 The end of testing days is always our favorite part, or as we like to call it New Monkey Time! :) This time around, I had asked KayTar if I could surprise her with a special sock monkey I found online and she initially said yes, but after such a long day of testing, she wanted an immediate reward and decided to go to the gift shop. We walked in and there was the SAME monkey I had picked out for her and it was her first choice, too! I love it so much! It was meant to be, I guess! On the way home, she said, "I just love today!" Not many people feel so fondly about a day that starts with puking and is spent at the hospital, but that is just how KayTar sees the world...the glass is ALWAYS overflowing, never half-full or half-empty! 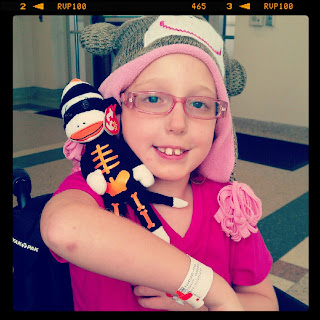 I love, love, love KayTar's outlook on life. I'm glad she didn't have to have the IV - but sad that the pulmonology testing resulted in puking. I hope the repeat testing goes better, though I hope they schedule her early in the day if she has to be NPO.

I'm amazed at both of you and how well you handle stuff like this.

I'm so glad KayTar had a good day. I just love her outlook on life. She handles everything with such grace and strength. She inspires everyone around her, including me.

Hope the tests can be redone with a mouthpiece KayTar can handle, and no vomiting occurs.