It has been a big week at the 'Tar household. Last Wednesday, KayTar received her awesome new wheelchair and her pulse oximeter. Yesterday, she received her oxygen concentrator and started on nighttime O2. A lot of changes and new routines to get the hang of. It might be a little sad and overwhelming if we hadn't been working towards these things for so long now (it was LAST summer when we started noticing KayTar's weird breathing...or lack thereof, and she has been too big for her stroller for AGES), instead I feel a lot of relief and maybe just a touch of new equipment anxiety. I'm relieved that insurance has readily agreed to cover what she needs and thankful we have time to adjust to the new stuff before the school year starts. I'm glad we have some new supports in place to help her feel better and have more restful sleep and more daytime energy, hopefully.

The wheelchair has been a very simple transition. KayTar loves it, so I love it. It takes more time to put it together and break it down to get it in and out of the car (which isn't exactly fun in this August heat), but the ease of use for both me and KayTar makes it WELL worth it. It takes about 4 steps to break it down, remove the seat cushion, remove the wheels (just have to press a button), flip up the anti-tips and the foot rests, and pull up on the handle in the middle of the seat. To put it together, you just reverse the process. Simple. 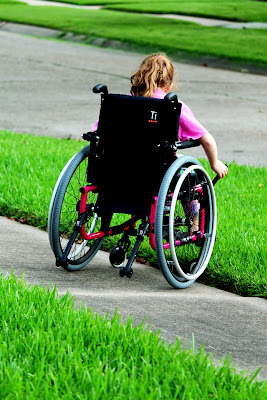 The pulse oximeter has been pretty simple, too. KayTar likes the probe on the big toe of her right foot at night. We only get 4 probes a month, so we've learned that after the first couple of days, we need to wrap it in a bandaid to keep it secure. I bought her some cute girly bandaids so her glowing toe can look cool. She doesn't have any complaints about using it. It has alarmed on several occasions, but she has resumed breathing on her own each time. It alarmed earlier this week on vacation and when I stood up to go check it, I discovered my leg was TOTALLY asleep and I collapsed. It was a spectacular fall. For the most part, she is satting a little lower than the pulmonologist wants her to...but not super low. We are going to do some spot checking at school (especially during PE) to see how she is managing there, too. 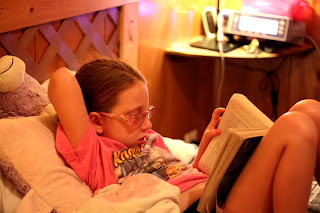 Oxygen is going to be the trickiest adjustment. She was very compliant during reading time and when I was cuddling with her at bedtime, but every time I went to check her, the cannula was out. It was a combination of it getting knocked out when she moved and her moving it in her sleep. I found it on her forehead and chin several times and once on her blankey. It is going to take some trial and error to figure out a good way to keep it in place! She said she didn't feel any better this morning, but I suspect you actually need to keep the cannula in to get the benefits of oxygen therapy! ;) We have a Respironics EverFlo compressor and an Ultrafill system to fill her portable tank if needed. It is pretty quiet and didn't seem to put off a lot of heat, which is a relief! BubTar did say that it sounded like Darth Vader was using the toilet (we are keeping it in the bathroom near their rooms)! 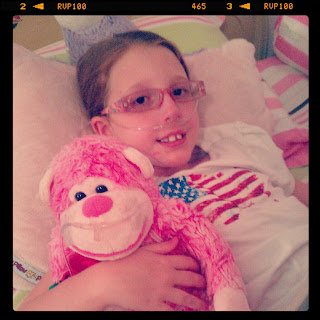 Monday is her echocardiogram, bubble test, and full pulmonary function testing at the hospital...then we may know a bit more about this respiratory stuff. In other news, her tummy has been giving us daily trouble recently (vomiting, feeling too full, stopping feeds early, venting out LOADS of air)...I don't know if we overdid it on vacation and things will normalize or if it is just something we will continue to deal with at this time of year. It is much less stressful this year, though, since we now have experience with dealing with it!

Oxygen update: I cut the ends off of a bandaid and used them to secure the cannula near her nose and threaded the line up her pajama shirt and it worked! I don't know if it will be a long term fix, but she wore her oxygen all night last night! Of course we had to color coordinate with her pulse ox bandaid! :) 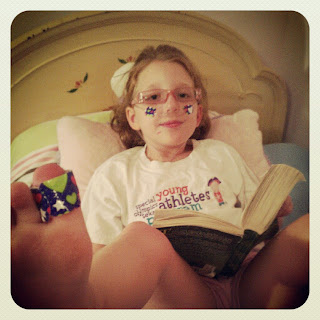 I'm glad you found a way to secure the cannula - Nolan hates them with a passion. He only uses C-Pap so the mask took some getting used to (read: horrifying three months of screaming until he adjusted), but it is fairly secure once it is on. Thinking of you guys today as you are going through the cardio/pulmonary testing!

When I and my brother were babies and we were both on O2, our mom would use the tape that the nurses put over the gauze pad after a blood test and put a piece on each side like you did with the ultra-colorful bandaids and then thread the "tail" down the inside of our "footie" pajamas and she got creative and cut a hole in the crotch area of the pjs for the tubing.

Okay, I am SERIOUSLY behind on my blog reading. Bad AJ. Bad!

Just had to comment on this old post because KayTar melts my heart with how complaint she is with everything. I know all the changes are not always fun, but she is so 'go with the flow'. I love that about her.

And I can just imagine your epic fall with the sound asleep leg. I did that a few weeks ago when we were out to dinner and when I stood up I nearly took out the whole table. Mortifying! :)