Wow, it has been over a week since I posted! Whoops! It has been a pretty crazy week, though. So Wednesday was the big birthday. My mom ate lunch with KayTar at school, brought her a little present and a Cinderella cake. After school was the gauntlet that is Wednesday afternoon, Girl Scouts for KayTar which we have to leave early from in order to get BubTar to theatre class in the next town over. KayTar and I hang at the library while he does his thing, then we headed home for about 2.5 seconds before heading out to dinner. We went ate at Casa Ole that night, her choice, and she ate REALLY well! They sang to her in front of everyone and it was awesome...she ate it UP! (video quality is poor, my phone didn't focus and if I had tried to reset it, I'd have missed it!


Poor Josh missed it because he was in bed with a migraine all day....so we went again the NEXT night, too.

On Friday, BubTar had a field trip to Austin (about 4 hours away) so I woke up and took him to school extra early and didn't pick him up until 8pm! He had a blast! KayTar had OT that afternoon, as usual, and we discovered she has VERY weak eye muscles. She has been having trouble with school work pages with LOTS of little problems on them (like half-sheets with 18 math problems on them) and so the OT checked her eye muscles and YUP, she's got a definite deficit there. So now we have eye exercises to do...which she HATED! She actually said, "Can't I just EAT something?!" she got so frustrated. The OT and I laughed...we NEVER thought we would find something she liked less than feeding therapy! That evening we went grocery shopping and started setting up for her party the next day.

Saturday was her Sock Monkey themed birthday party with a suggested dress code of pajamas! A lot of people, even grown ups, did come in PJs. I'm kicking myself for not getting a photo of KayTar with each of her guests like I have in years past...it just slipped my mind! She had a great time at the party and got a lot of neat stuff, Sock Monkey and otherwise. A few of her new favorites seem to be her Smashbook, Sock Monkey slippers, WillowTree angel (from Nurse C, who we regularly give these angels to...so special!), her Sock Monkey in a box, her two-faced Sock Monkey umbrella, her Sock Monkey Family, and the $20 she got from her honorary aunt and uncle....among other things. When I ask her what her favorites are she just CAN'T narrow it down and starts to list everything. She's such a thankful kid.  She spent the night with her cousins at my parents' house that night and some of our friends stayed over after the party and we had PJ game night.

On Sunday morning, I picked her up and we went over to Josh's parents' house for a belated birthday brunch for KayTar. KayTar LOVED the fancy breakfast place settings and the breakfast meats of course! After that was over, we had to run a few errands. When we got home, I had to start on my Stats homework...three chapters in ONE day! Agh! The boys were busy working on preparations for the Cub Scouts Blue and Gold ceremony the following day and KayTar was happily engaged with all of her new goodies for most of the day.

Monday was Blue and Gold, which deserves its own photo-centric post. The boys did such a great job with the decorations and cake! It was a late night, though, especially for KayTar who was up 2 hours past bedtime, and she ended up with a bit of a headache the next day. Tuesday was a delightfully laid back day...class, laundry, grocery shopping, lots of Wii time with the kids, and dinner at home! Yesterday was a bit busier...school, driving out to the hospital to get more formula for KayTar, picking up the kids, coming home for a short pit-stop before rushing BubTar to theatre, going to the library with KayTar, coming home to rush through homework, dunking KayTar in the tub for a quick bath, and barely getting it all done before it was her bedtime! Whew! And that brings us up to today which is the first decent chunk of time I've had to devote to blogging since KayTar turned 7! ;) 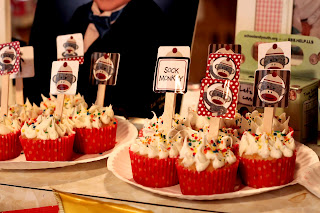 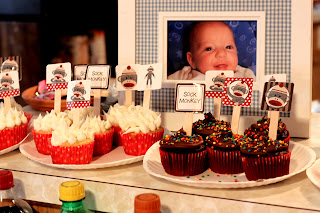 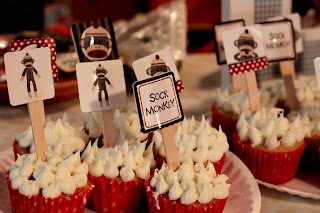 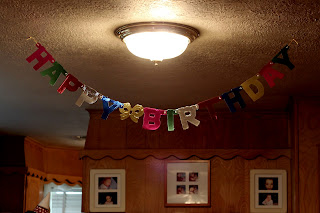 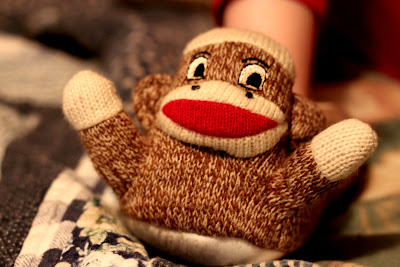 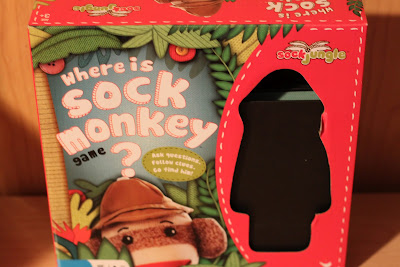 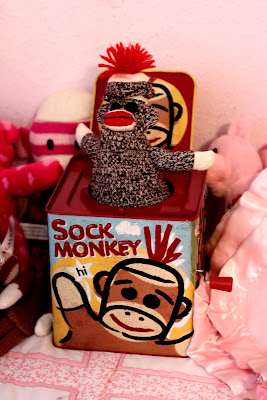 What an awesome party idea!! I LOVE the decorations on the cupcakes, they look professionally done.

The cupcakes are super super cute! Great job! We have that jack-in-the box, too, and it has been played with by kids of all ages for several years. Also, the song Brass Monkey keeps going through my head, so take that as a party suggestion and file it in the too-late department.

This is quite possibly the cutes birthday party theme EVER! I love it! I can’t believe she turned SEVEN! I remember when you were pregnant with her. Time sure does fly. She is certainly turning into a beautiful, wonderful young lady.

I love the fact that she's a sock monkey fan - it is just so cute! Though the two-headed monkey umbrella is slightly disturbing, hahaha! What a cool birthday party - looks like everyone had a blast. And GREAT job on the cupcakes - those are adorable!

What a fun and special party! Josh is just impressing me left and right with his bakery skills. ;)

And Mrs. H with her thoughtful Willow Tree and its place of honor next to Aaron's picture...that is just an awesome amount of sweetness right there!

So glad KayTar had a great day celebrating SEVEN!

Beautiful pictures! And yes, Josh did a great job on the cupcakes! She got alot of sock monkeys I see! And I LOVED the quote on the Willow Tree angel box, and totally agree that a day without KayTar is like a day without sunshine!

Happy Belated Birthday, KayTar! Looks like it was amazing!