This weekend was sponsored by...

KayTar has been having some GI issues again. For a couple of weeks now, she's been going several days between bowel movements (which means her constipation is getting out of control) and we've toyed with her Miralax dose, but haven't been able to work things out easily. She has been waffling between liquidy stool and nothing...so this weekend we upped the Miralax and stayed close to the bathroom! KayTar enjoyed some movies and relaxation time in my bed and we got things moving. I think she is all cleaned out now, the tricky part will be finding a dose that keeps things moving from here on out. She actually had fewer accidents this weekend than she normally does, because things were running like clockwork. I'd send her to the toilet after a feed and she'd take care of business. However, we can't keep things THAT loose for long, because she would be losing too much fluid that way. So hopefully we find the right dose for her!

In other GI news, we increased KayTar's feeds last week and it started out well, but she had some post-feed tummy pain a few times and then she vomited up her entire feed Friday night. She said she was too full. It was the first time she has vomited in a good long while (for her anyway) and the increase in formula volume was the only real change. Saturday morning, we went back down to 6 ounces at a time and she's been okay, mostly. She also threw up last night (a few minutes prior to puking, she was crying because she wanted to sleep in my bed for a third night in a row). I couldn't figure out where her puke bowl was in the dark (it was hiding under the bed) so I had to run her to the bathroom and we didn't quite make it all the way. There was a bit of a trail left behind us. Yuck. She seems okay, though...just part of being KayTar, I guess!

I'm a little disappointed that the transition back to 8 ounce feeds was not a success. While 6 ounces at a time is totally workable and much better than 4 ounce feeds, I just don't like that we've lost ground or that we're looking at a new normal for her. Although KayTar has a history of new issues cropping up on her, this is the first time I feel like we're likely seeing a decline in organ function (well, other than her progressive hearing loss). Her reflux and constipation have gotten worse and her volume tolerance has decreased. It is SLIGHT, so slight, but it is still a step in the wrong direction. Her GI doctor did write a prescription for Augmentin to be used as a prokinetic agent (200mg, 4 times daily) to try to get her back up to normal feeds, but I'm torn about starting that at this point. IF this is progression, then we are likely to see more at some point, and if we pull out the big guns now, there won't be many next steps to take LATER when we might be looking at a more significant decline. We can live with five 6 ounce feeds every day. It is a little more inconvenient, but not too much of a change overall. But if in a year or two years or three years, she starts to tolerate less and less volume, I don't want to be out of options. I'm getting ahead of myself, I recognize that, but these long term concerns are a factor in what decisions we make right now. I think at this point, we're going to keep her at 6 ounce feeds for a couple more weeks and maybe attempt another transition. I'm not sure if time will make any difference, but it is the course of action that seems least risky for her right now. 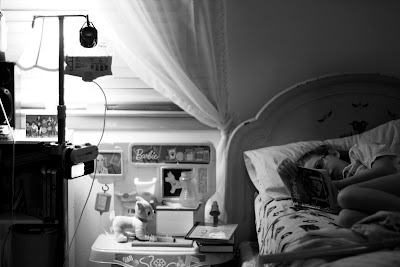 Oh, ugh. What is it with this weekend and GI issues? I wish that I could combine Nolan's stomach with KayTar's. We might get a normal input/output then (Nolan's reflux is on the rise again, but with chronic diarrhea rather than getting blocked up).

You are amazing. Huge hugs!

I love that photo!

I am really, really hoping that this is just a temporary things and that before you know it she will be back up to 8 oz with no problems. You are wise to not ignore that it might be a problem, but at the same time I hate to hear the worry in your "voice".

I love that photo. So true to life. Beautiful in it's own special way. Hang in there friend!

And, hey, just think, maybe next week can be sponsored by unicorns and hobbits ;)