I haven't done a medical wrap-up in quite sometime. Here goes!

KayTar is our little diagnosis defying diva! As you can see, she has had LOT of tests in her wee little life and the majority of the results have every been are ABNORMAL, BUT NONSPECIFIC. Here is what we DO know:

1. She has a smattering of small lesions in her brain, in the frontal, temporal, and parietal lobes. Do the doctors know how they got there? NOPE! But there they are! The theories including an insult in utero, such as a CMV infection (this is unlikely because there are no calcifications on CT scan), or perhaps a metabolic disorder (this is somewhat unlikely because her MRI is not a classic presentation of a metabolic disorder).

2. She has a feeding disorder/sensory issues. She only eats specific foods and only when she "feels like it". Her diet mostly consists of fatty, salty meats (sausage, bacon, chicken nuggets, ect). She eats no bread, cereals, pastas. She eats no fruit or juice. She only eats certain veggies and ONLY in stage 2 baby food purees. Some days she doesn't eat anything. We use Pediasure to give her what she needs, and to do that we need her g-button. We try to goad her into drinking as much Pediasure as she is willing to, but we use her g-button every day to make up for the rest. Certain textures and sounds make her gag and vomit instantly and it is waaaay more than "picky eating". I'm a picky eater. BubTar is a picky eater. KayTar doesn't always feel hunger and she rarely acts on it appropriately. It is definitely not picky eating. She is in OT for the sensory stuff and feeding issues.

3. She has mild gross motor delays. These used to be HUGE gross motor delays, but she has made some great progress over the years. She didn't walk until 25 months and was still struggling quite a bit with balance and core strength until she got the g-button and then her strength considerably improved. She used to be significant, globally delayed, but now she has caught up to her peers (and sometimes surpassed them) in nearly every way. She can read at/above a 3rd grade level at 5...she's been reading since at least 27 months, perhaps sooner, but she couldn't really speak until then, so we don't know. She can tell you that fingers and toes are called phalanges and that urine is 95% water and 5% urea...among other things. She's a smarty-pants, and you'd never guess she had such a rough start in life if you met her now.

4. She has unilateral left-sided hearing loss. It used to be mod-severe, but has progressed to profound. She used to wear a hearing aid, but it can't help anymore. So far, her right ear is fine...but they can't tell us what caused her deafness and they can't tell us if it will progress to the other ear in the future.

5. She has chronic constipation, which we treat with Miralax. It is mostly a non-issue these days, but we can't seem to get her 100% poo-trained on the potty. I think the need for Miralax is working against her. The explanation here is that kids with any level of neurological impairment often have poor GI motility. Josh hates this explanation.

6. She has mild asthma and a penchant for URIs, bronchitis, and occasionally pneumonia. She is on Qvar and Albuterol. She gets sick, she gets congested, she start vomiting and she stops eating and drinking. This happens ALL.THE.TIME. I don't know how we survived without the g-button for so long. She used to get strep like crazy, but we had her tonsils and adenoids out in November '08 (at the same time as her g-button placement and muscle biopsy) and she hasn't had a case of it since.

7. (This one is new!) We now know that when she gets sick, she also gets ketotic (she starts burning fat for energy rather than glucose) if we don't load her up with some glucose-rich food or drink STAT, then she gets hypoglycemia. It also happens when she fasts for too long (which isn't nearly as long as "normal" people can fast) or when she is too active. She was ketotic almost every day of camp recently. Ketotic hypoglycemia! We're in the midst of a work-up for this, she just had an ACTH stimulation test (got the results today: normal adrenal response, but slightly elevated AST, so we have to go back in to repeat AST/ALT labs) and we see a new geneticist who specializes in this area in a couple of weeks.

8. She used to (knock on wood) have really horrific neurological episodes or attacks in which she would exhibit a mix and match variety of symptoms: extreme pain, extreme light sensitivity, vomiting, "spinny-ness", sometimes drunken/silly behavior, and always, ALWAYS a significantly altered level of consciousness. She would go from being regular KayTar to mostly non-responsive KayTar...she would only respond to pain. I hated that part the most. When she was younger, they also consisted of a head tilt, it was like her head was magnetically attached to her shoulder for the duration of the episode. They started out lasting roughly 20-30 minutes, but as time went on they grew to be as long as 18 hours in length. They used to happen about every 15 days like clockwork. Eventually they spaced out some and then the placement of her g-button nearly eradicated them. She's only had 2 since her tube was placed and we are almost 2 weeks away from a full year without one. (KNOCK ON WOOD!!!) The long standing medical theory is that they are some kind of atypical migraine or migraine seizure hybrid. My theory (which is what led us to the ketotic hypoglycemia discovery) is that they are triggered by a metabolic crisis of some sort, such as severe hypoglycemia. Her altered mental status could be easily explained by neuroglycopenia. They happened most often when she was ill or when we had an especially busy or exciting day, when her intake would have been low and her energy expenditure would have been high.

9. She has had a few fairly impressive reactions to an unknown allergen; lip and tongue swelling accompanied by vomiting. She's had a couple of RAST tests run, a couple of scratch tests, a peanut challenge, and we've got a tree nut challenge coming up in a couple of weeks. If it is all negative, they may do some immune testing to figure out what is causing the edema. We carry an epi-pen just in case.

10. She has pretty severe sun sensitivity. Some days she can't tolerate being outdoors at all. When we walk from the car to the store she has to totally close her eyes most of the time. We ordered transitions lenses for her latest pair of glasses and they help somewhat, but not entirely. Sometimes she says, "Help! My magic lenses aren't changing!" but they are as dark as can be and the sun is still too bright for her to open her eyes. We have to be careful about planning outings that require time in the sun, because we never know how her eyes will behave. Neuro has turfed this to ophtho and ophtho has turfed it to neuro...and nobody has figured it out.

So that's the wrap-up! I think I hit most of the majors. She is followed by a pediatrician, neurologist, geneticist, gastroenterologist, otolaryngologist, ophthalmologist, endocrinologist, orthopedist, and a pediatric surgeon. She goes to OT and PT every week. She's being mainstreamed for Kindergarten. She is healthier than she has ever been. She's thriving these days and we're so, so happy about that. 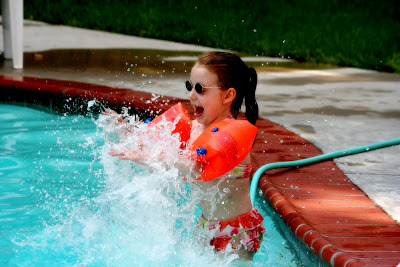 Such an amazing little girl. I so wish I could meet her.

I'd actually forgotten about the sun sensitivity... which is ironic, because the story I started working on at her request (what, over a year ago??) stars a princess with normal-ish vision but enough photophobia to require sunglasses even when other people are totally fine! (If I ever manage to actually get beyond the intro paragraph, I am totally sending it your way for KayTar to enjoy/review. XD)

If you won't shoot me for giving what could be considered assvice, have any of her doctors brought up getting her custom sunglasses that block out even more light? I was told somewhere on LiveJournal that they can make sunglasses that block out something like 95% of the light around you; it was mentioned in a post made by a girl who actually carries a blind-person-style cane because just like KayTar, if it's sunny enough out she can't handle having her eyes open. I actually can't handle bright light very well either, but in my case a baseball cap is all I need.

I think physiology will be a breeze for you.

Sounds like attentive, caring parents have a lot of responsibility for how far she has come - often as (or more) important than what the doctors can do.

I kind of agree with your theories about neurologic episodes (not a pediatrician - just hunch) - sounds like the addition of an alternate mode to get nourishment has helped her a lot.

Wow. That's quite a list. She's an amazing girl -- and she's got amazing parents.

She is healthier than she has ever been. She's thriving these days and we're so, so happy about that.
And THAT RIGHT THERE is the important bit. For a kiddo with such a long list of problems she leads a pretty damn near normal life according to your posts, and tahts teh way it should be!

I'm happy about it too! She seems to be doing so well now I didn't realize how many issues she still struggles with. It just proves how far you have come. Thanks for keeping us updates on how she's doing. I think about her all the time.

She really is an incredible kid! I'm sure you hear this all the time (because lord know I do), but can you imagine how different things would be for her if she didn't have you and Josh for parents? Your detective work and the relentless advocacy work you two do as her parents has brought her to this point. You guys are as incredible as she is.