I finished Trig last Thursday. I ended up getting a B in the course, boo. My first two tests were a little rough, because I didn't know what to expect from the professor's exam style and I had to figure out the most efficient way to study for them...but in a 5 week class, with tests every Monday and a final on that last Thursday, there isn't a lot of time to get your legs under you. So, I pulled it up to a high B. One more week and I'd have had my A, but I'll live.

On Friday, KayTar had PT as per the usual(she did really well!), and the boys were busy packing up to go camping for a few days. Josh begged us to come along, but I just wasn't into it. I'm no outdoor girl, plus it was a scout family event and I don't really know any of them yet, due to the fact I'm never at activities because of my school schedule. I wasn't quite ready to spend 3 days and nights in one big room with these people.

My friend, E, was coming to Galveston on Friday, so we made evening plans to get together. She, her husband and two boys, and Katie and I all went out for a yummy seafood dinner and then went to Rainforest Cafe, where we took the kids on the adventure ride and had the volcano dessert. The kids were SO hilarious and cute together. They haven't seen each other since they were about 3.5, so they didn't really remember each other, but they sure warmed up to each other quick! Some of the things they said were so hilarious. At one point, H coolly said this to KayTar, "So. You going to the Jungle Cafe later?" It was such a pick-up line moment. Later, KayTar complimented the sunglasses on his head, he replied, "Yeah. I wear them in the sun." The intonation was just HILARIOUS. Very mini-stud like. They were holding hands and KayTar was chasing him around trying to give him a smooch and at the end of the night she hugged AND kissed him. She asked E, "When I grow up, can I sleepover at your house? In H's room? You should get me a cot for that, so I can be so comfortable." Ha! They were fast friends! 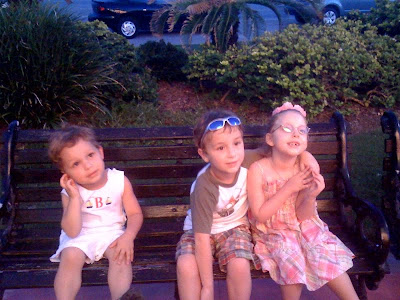 (Like the way he has his arm around her and she's absentmindedly fiddling with his fingers? They're 5 going on 16, I swear.) 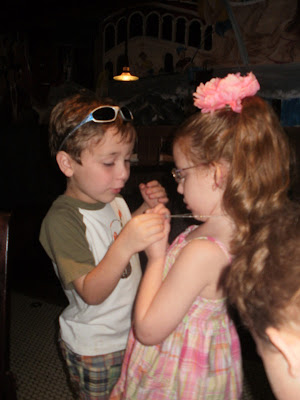 KayTar and I spent the night at my parents' house that night. She thought it was SUPER fun. She sleeps there on occasion, but I never do, so it was extra exciting for her. I got to sleep in in the morning, and then we went swimming first thing. After swimming, we headed home for a while to get ready to go see Despicable Me. It was hilarious!! I highly recommend it. We're taking the boys to see it this week sometime, because it is worth watching again...and I'm not big on kid movies. After the movie, we went to my parents' house again. My dad grilled some chicken thigh, stuffed with mozzarella and jalapenos, wrapped in bacon. YUM. We had corn on the cob and baked potatoes, too. We swam again and headed home for the night after that.

On Sunday, we drove up to the campgrounds to visit our boys! We had a fun day. Lunch, swimming in the river, dinner. It was great. My favorite part was the swimming, because I hate being outside unless I'm in water..it is ridiculously hot here during the summer. I hate it. I took a lot of photos while we were there, I'll post my favorites tomorrow. 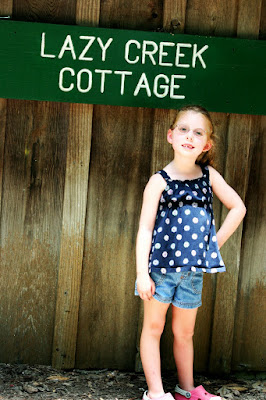 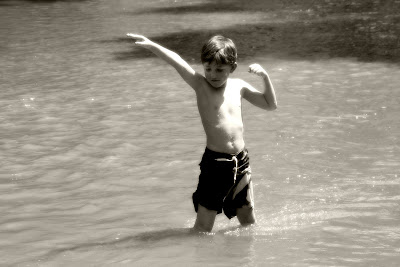 Yesterday was KayTar's genetics appointment. He was so unprepared. I guess he read her early file and none of the recent material? He wanted to discuss her dystonia and paroxysmal torticollis...that was YEARS ago! I had to give him the rundown as he read through her labs and attending notes on the system. By the end, he agreed we should test for GSD 0 and he also wants to rule out growth hormone deficiencies. He said it is unlikely, because she is within the age-appropriate growth parameters, but he's seen at least one patient with these deficiencies that wasn't small for age. We'll have the labs run later this week, as well as a recheck of her AST/ALT due to the elevated AST on her last round, later this week. She's chosen a shopping trip to GameStop for her post-needle treat this time. Yes, we bribe her. Yes, we're okay with this. She's had so many tests, she deserves a little something extra for being such a sport about it. If a new Pillow Pet or a video game can ease her anxiety, so be it! BubTar gets rewards for all A's on report cards...it is the same principle. After all the labs are back, it looks like she will be doing an inpatient fast. Yikes, I'm sure that will be loads of fun. (No, it won't. Not. At. All.)

The boys got home around the same time as us and we just relaxed for the day and went swimming in the evening. We played Super Mario Bros Wii last night for the first time in over 5 weeks (we're trying to beat it), then I listened to KayTar read my some Junie B. before bed. It was the perfect long weekend!
Posted by Kyla at 10:21 AM

Sounds like a great weekend! I haven't seen Despicable Me, but Toy Story III is fabulous.

Sounds like a really amazing weekend, all in all. I saw the previews for Despicable Me and it does look good!

I love the long update about your weekend. I've been meaning to say something about your meet-up with E...sounds like such a fun time. H and KayTar couldn't be cuter together. I'm going to have to make a trip to TX with my boys before she's all shacked up over at their house!

I'm also glad to hear you liked Despicable Me. Adam absolutely loves the previews and I'm really wanting to take him to a movie he'll enjoy (Toy Story 3 got 2 thumbs down in his book).

Tell your dad he can grill for me anytime. YUM!