We spent 8 hours at the hospital today. KayTar's tree nut challenge was today. Although she HATED the cashew butter and nearly barfed, she toughed it out and did it! She passed the test and now has no feeding restrictions...except for the 100,000 restrictions she puts on her own diet!

Because she had a minor episode of lip swelling a few weeks ago that seemed to be unrelated to food, the allergist wanted to run some labs (TSH, T3, T4, free T4, C3, C4, CBC w/diff and ESR). So after the 4 hour tree nut challenge, the nurse put EMLA cream on both of KayTar's antecubitals and we headed down to the outpatient lab to check in. There was a wait (both for labs and for the cream to do its job), so we went to the cafeteria to have Subway as I had promised KayTar. She likes the Spicy Italian, hold the bread, veggies, and dressings. We ate, then went back to the lab. The tech tried to get blood from both arms, but no luck. After the first try without blood, KayTar said, "I'm not bleeding. Well, I guess I'm dead." KayTar's one good vein was still bruised from Tuesday's labs. A second tech came in to try, but no dice. They sent us back upstairs for more EMLA...on her hands this time. Then we killed another 30 minutes before heading back to the lab. While we were wandering around, a nice volunteer gave KayTar a brand new little Beanie Baby bird out of the blue. She was pretty pleased. Two more sticks (one in each hand) and they finally got blood! 4 sticks total, plus some fishing around. Thank goodness for that EMLA. It was a long day. She more than earned her Little Mermaid game for the DS.

In other news, still NO POOP. I'm starting to get a little anxious about it. Since her KUB, 2.5 more days worth of stool has accumulated in there. I have a feeling this resolution is going to be fairly horrible for everyone involved. Ugh. I'm going to put a call into the gastroenterologist tomorrow morning to ask if we just stay the course or need to take additional action. We shall see. 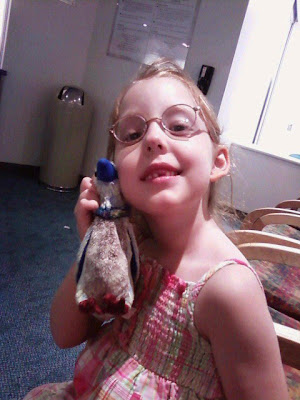 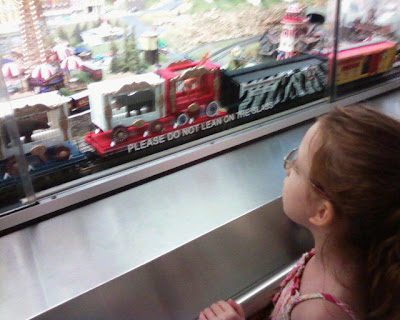 Labels: a and i, gastro, KayTar, medical

She and Sicily have same self-imposed diet restrictions. Funny!

Thinking of you guys today!