Well, that was unexpected.

Yesterday, my big plan involved buying myself new socks and resting a bit to fight off a cold. Instead, I spent the day at the Children's Hospital because KayTar needed urgent surgery!

Yesterday morning when Josh tried to give KayTar her usual morning feed, he couldn't get the Pediasure to run in. He tried flushing the tube with a syringe of water, thinking maybe there was some build-up in the tube, but it ran back out. He called me to look at it and I discovered that the stopper on the closing latch was missing...probably stuck in the tube, causing the blockage. DANDY! I emailed our pediatrician who told me to call our surgeon. I left a message with the answering service and started getting ready. While waiting for a call back, KayTar woke up and started coughing and vomited some. The coughing was causing fluid to leak out of her tube (the stopper seemed to have lodged itself in the valve, causing her stomach contents to spill out. Yummy, right?) I got a call from the pediatrician who had texted the surgeon who told her that he could squeeze us in between cases and to call the clinic and tell them that. So I did. While I was on hold with them (they had to page him to verify what I told them), the pediatrician called back and told me that the surgeon said to just show up at the clinic and they'd get us in, so I hung up on the clinic and started packing up for a day at the hospital. The clinic called back and said they could see us as fast as I could get there, so off we went, with everyone on the same page, finally.

KayTar has a Bard button, so it has to be switched out by the surgeons. It doesn't have an internal balloon to deflate, it has a hard mushroom that is difficult to remove and requires some force for both removal and insertion, so the surgeon has always told us that it is best done under anesthesia in the OR, so when we arrived at the clinic I made it clear that I did not want it done while she was conscious. The second consideration was her hypoglycemia and the fact that she had been NPO for a while, and the longer she was NPO, the more she was at risk for becoming hypoglycemic. That left us with two possibilities, going down to the ER, get an IV set-up, get admitted to surgery and wait for a surgery time to be scheduled or try to get her into day surgery as soon as possible, sidestepping the ER and admission, but possibly facing too long of a wait without any sort of carbohydrates or fluid. The surgeon we saw said that it could go either way, depending on the day and the case load in the OR and ER, but after talking to his colleague who was in the OR that day, he felt that our best bet was going over to day surgery and getting to prevent hypoglycemia.

We discovered the clog about 7am. We left home at about 9am. We arrived at the clinic at 10am. We were in the day surgery waiting room by noon. They took her back at 3pm. She was in recovery by 3:20. We gave her a test feed of Pedialyte at 4, and we were released at 5, after she kept it down for an hour. We were home a little after 6pm. It was a crazy day, definitely not what I expected when my alarm went off yesterday morning, but I'm glad it went as smoothly as it did. KayTar came through surgery like a champ, her biggest complaints yesterday were discomfort from her tummy leakage and the removal of her chest electrodes (she's actually still wearing one today). My little cold took the opportunity to morph in to bronchitis, it seems, but all in all, everything went really well. If it had to happen, at least it happened yesterday when my major finals were already over! 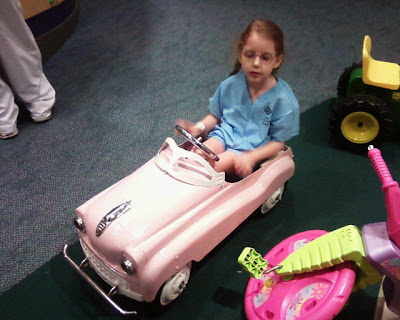 Oh man! I was holding my breath while I read that. Glad everything is alright. It sounds like you have a GREAT pediatrician!

You have way too much excitement in your life. Glad it went so smoothly.

Whoa! I agree with Becca, your pediatrician sounds unbeatable. As soon as I saw that photo of Kaytar (I think I saw it on FB first?) I knew it was at the hospital. It reminded me of our play area in same day surgery - a place we frequent now and then :-)

So glad everything went smoothly. She's a trooper!

never a dull moment at the tar residence.

whew. that was the best ending to a "surprise surgery" story. yikes.

Oh my gosh, there truly never is a dull moment for you, is there? I'm SO glad everything went well. Phew!

Dude. Your life is never calm.

So glad all is ok - your life is such a roller coaster!

Thank Goodness! That's quite a day. (I was sick on Wed, too - must've been double hard. You see the silver lining - occurring after exams.)