Yesterday was our 9 year anniversary, we were definitely living out the IN SICKNESS part of our vows. After taking a sick day on Saturday, I felt a bit better on Sunday until evening hit and my asthma (which hasn't acted up in years) went berserk. I went to the doctor on Monday spent $273 on an office visit, got a steroid shot and a prescription for antibiotics. I felt a little better that afternoon and the next morning and managed to gear myself up to go on BubTar's field trip with him. By the time I got home I was starting to feel much worse and have just been getting sicker since then. I'm dizzy, coughing, wheezing...I can barely talk or walk without getting incredibly winded. I can't even drive the kids to and from school because I'm afraid I'll pass out at the wheel because I'm so light-headed. I've been coughing with such force that I pulled some chest muscles and I think I've been coughing up a bit of blood, too. In short, I'm quite miserable and I haven't been sick like this in ages. I haven't even needed my inhaler for years prior to this! I called the PA back this morning and she called out a prescription for a course of oral steroids, so hopefully this will do the trick. I do not like being sick like this!

Last night, Josh brought home Pei Wei for our anniversary dinner since I was obviously too sick to go anywhere. It was a far cry from date night...Josh sat at the table while I half-sat, half-laid on the couch while KayTar INSISTED on feeding me several bites of my food. She told me, "I'm the second mommy in this house, so when you are sick, I'll take care of you like you take care of me." Later on, BubTar cuddled up with me for a while and watched Charlie and the Chocolate Factory on TV (which is the play we went to see for his field trip, actually!). Once the kids went to bed, Josh played Wii while I laid on the sofa, alternately resting/trying to expel my lungs from my body with the force of my coughing. Josh took note of my declining condition and brought me VapoRub and my inhaler, then sat with me and rubbed my feet while we watched our Wednesday night TV shows until I finally felt calm enough that sleep might be possible. It certainly was not the most romantic anniversary on record, but I did feel extremely loved regardless of how sick I feel. Nine years ago, we were just two crazy kids in love and over the years we've taken that love, invested it in each other and in our children and it has paid out in the richest of dividends, and we intended for it to continue to do so...For better or for worse, for richer or poorer, in sickness and in health, as long as we both shall live. 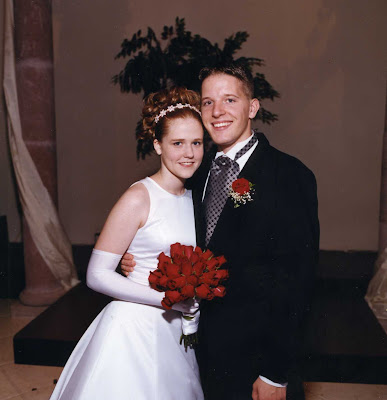 I'm sorry you're still feeling so dreadful... after the week you've had, though, I'm not surprised your immune system is so stressed!

I hope KayTar is feeling better, too.

Oh, I am sorry you are so sick! Glad you have such a lovely family to take good care of you! Feel better.

Oh Kyla, I did not realize you were THAT sick. It just sounds horrible! I hope you are able to get some really good rest tonight and that you'll be on the upswing tomorrow.

On a better note, what a sweetheart husband you have. And even though you felt horrible, so glad you could feel all the love your family has for you on your anniversary!

You do have a lovely family. In so many ways!

Wow! A true child bride. A beautiful one.

Happy 9th! Monday would have been my 13th. Maybe someday I'll start over.

Sometimes the best moments are the little ones. Congratulations!

How wonderful they are to you! You are so blessed.

there's far more worth in that kind of expression of love.

So sorry you are sick!!