KayTar is quite sick. Yesterday she was playing in her room and shouted to me, "Mom! I'm having energy problems! I need my Pediasure!" so I sprinted up the stairs with her cup in hand, laid her in her bed and told her to drink and listen to the radio. I came back down stairs and listened over the monitor. It was silent. I ran back up to check on her and said, "Are you okay? Do you feel weird? Spinny? Are your eyes okay?" I'm thinking "Oh shit, I jinxed her into an episode. Perfect." She said, "I feel weird. Throw up weird." UH-OH. I sprinted to the kitchen for a pan and said, "Please, PLEASE, don't throw up until I get back!" When I got back, she wanted to come downstairs to rest in her baby chair and as soon as we got to the living room, she puked a ton...into the pot, thankfully. I gave Zofran pretty soon after and she had a decent day of intake for being sick. 12 ounces of Pedialyte after the Zofran and a handful of Saltines. She peed twice.

This morning, though, she was feeling worse, shaky and hot, dizzy, unable to stand or walk. I checked her glucose, because the last time we were in the hospital, she had these same symptoms. It was 53, which isn't normal, but it isn't crazy low...like when it has been in the 30's at the hospital. I gave her a 4 ounce bolus of Pedialyte to try and bring it up, but she wouldn't let me give her any more. She said it was making her feel sick, and I figure that keeping 4 ounces IN is better than more than 4 ounces coming right back OUT. She is still so lethargic, though, I rechecked her glucose (64) not long ago and she didn't even wake for the poke. Poor babe. I hope we avoid the hospital, but even MORE than that, I really hope we avoid an episode. When she gets like this it makes me so nervous that one is lurking right around the corner, waiting to pounce on our sick and vulnerable girl. 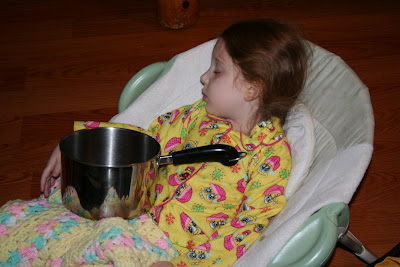 ETA: Her glucose is up to 85, she finally peed, and I've gotten in three 4 ounce Pedialyte/Pediasure feeds into her over the course of the day. Looks like we have narrowly escaped a trip to the ER! Here's hoping she is on the upside of this thing!
Posted by Kyla at 11:41 AM

Oh no!! Poor thing. So sorry. And she's been so healthy!

i hope she gets well soon, and she starts to handle bugs like most children... a day or two and then back to normal, no hospital needed!

Well my goodness...I can't believe she got so sick so suddenly. :( I hope her recovery is just as speedy.

And thank goodness for the baby chair...that thing has definitely been worth the money!

Poor sweetie! Here's hoping she can keep keeping the pediasure down and get better fast.

Eek! Kyla! Now I want to make you stop sharing good news with us, in case you're pissing off the babygods or something, and they're going to come back to bite you.

We've had the stomach flu here, too. Who knew it was worldwide?