(Not Quite) Wordless Wednesday: The Champ!

I actually have a LOT to talk about right now; healthcare reform passed, I have a new theory about KayTar's episodes, KayTar restarted therapies this week, I'm getting sick...but I am working on exams and everything else will have to wait until I come up for air!

For now, I leave you with a picture of the kid who won the Pinewood Derby last Friday evening! (Josh came in first and KayTar came in second in the non-scouts derby, too!) Josh was out of town, KayTar was very sick, and my dad had to take BubTar to the derby and race for Josh and KayTar. I don't know how we would manage sometimes without family nearby! Sweet little BubTar was just OVER THE MOON when he got home, telling me all about the big win. Josh was pretty adorable too, even though he was out of town, he called SEVERAL times that evening to see if I had results yet. He was so bummed he had to miss the race and I think he was almost as excited as BubTar that his boy had won first place. KayTar was thrilled to find out her little pink hot rod had won her very FIRST trophy, too. The 'Tars swept the derby! Next stop, district finals! :) 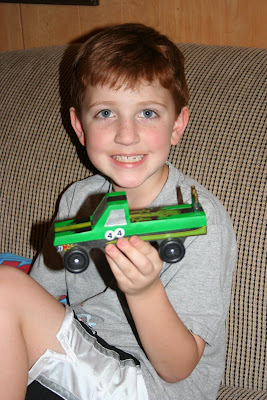 I've been looking forward to hearing your thoughts on the heath care plan. In the meanwhile...Go Bub!

Yeah, 'Tars! You are ALL incredible!