My body is out to get me. Seriously.

You recall the whole trip to the ER/cancer scare from a month ago? Well, it gets better.

A couple of weeks ago, I can only guess that I injured my knee pushing gurneys around the hospital. I have historically bad knees, I've already had knee surgery once, at 17 just a few weeks before my wedding. My left knee, the one that had been previously operated on, was the one I injured. Somehow, in favoring my left knee, my right knee became inflamed as well. I had to miss my volunteer shift at the kids' school for two weeks (can't stand, sit, kneel to sort books if my knees aren't working) and my shift at the hospital for a week (can't push wheelchairs and gurneys if I can barely walk). I did the proper thing and RICE-ed my knees as frequently as possible and my right knee began to feel much better. Unfortunately, though, one day back at normal functioning and my left knee AND my left ankle were swollen and painful. Last Friday, I was actually on crutches, because it had become so unmanageable. I spent much of the weekend with my knees and ankles elevated with ice packs and tried to stay off my feet as much as possible and FINALLY by Sunday I had regained most of my joint function. Yesterday night I was finally able to get back to the hospital, with the help of a knee brace. This morning my left ankle is once again inflamed, but it is nothing that rest, ice, compression, and elevation (plus some NSAIDs) can't fix in a couple of days. Two weeks of being largely immobile was torture and I will be pleased when I'm back at 100%, without these constant setbacks.

In addition to my musculoskeletal issues, my reproductive system is also out to get me. If you don't dig hearing about lady-troubles, go ahead and skip this portion of the post, okay? Last month, I had the heaviest period of my life. This is what landed me in the ER, I was actually concerned about the rapid blood loss. It was insane. I'm a light-flow kind of gal and this was like internal hemorrhaging levels. It sucked, though not as much as the pelvic exam I had to have in the ER. I think that might be as mortifying as it gets. Anyway, skip ahead to this month. I start my period on time, Monday. The cramps are so insane that it began to give me intestinal problems, if you get my drift. I got all the way to college for my evening class and had to turn around and come home. I was definitely too sick to make it through a lecture. I had to miss Biology class. Tuesday, I was feeling a little better. I had a pretty normal day, made it to Chemistry class and did well on the exam. On the way home, I started to experience some pain, similar to the pain I feel when ovulating, though by the time I arrived at home, it was reaching blinding-pain levels and showed no signs of slowing down. I had to take an actual pain pill to make it bearable and I hardly slept at all. In the morning, the pain was worse (if possible) and I was unable to get out of bed to get the kids ready. I had to lay immobile on the bed while giving instructions to Josh. It was pitiful. He had to drive them to school, because I still couldn't move when it was time to go. I took more pain medication and tried to sleep. By the time I had to start the pick up rounds, I was able to hobble to the car, with the help of medication. By evening, I was still in such pain that I again had to miss class, which of course was once again Biology, which puts me a week behind. Finally by Thursday I was feeling better and was able to hobble to class with only my mostly manageable joint pains. I'm fairly certain it was a ruptured ovarian cyst, I've had one before and it is the only time I've ever experienced that kind of pain. I don't recommend it.

Lately, I've felt like a car losing parts as it speeds down the freeway. Yesterday was the first 100% normal day I've had in more than two weeks and it was so wonderful. Yes, my ankle is swollen and sore today, but it was WORTH IT. I cannot stand being laid up, I don't like putting everything on hold to basically sit and do nothing, even if it is the right decision at the time. I just hope that yesterday is the first of MANY days in which I can function like a normal, healthy human being again. I might be interested in medicine, but I'm no good at being a patient.

Since you patiently read through all of that whining, I will now reward you with photos of cute children, I'm sure you've missed their bright and shiny faces: 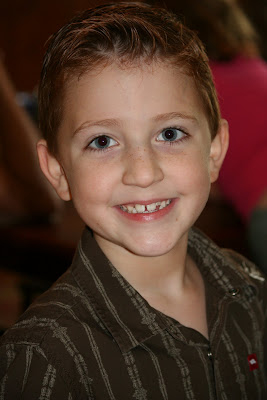 This kid is crazy handsome, no? 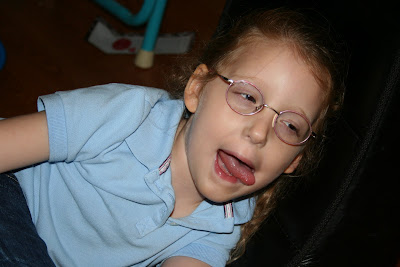 This kid is a nut who no longer poses for anything resembling a normal photograph. I can't even sneak one when she isn't looking.
Posted by Kyla at 8:36 AM

Oh yuck, I am so sorry about the tough time you have been having! The cyst sounds awful! Hang in there.

Wow! And when mom is out of commission, everyone suffers :)

I hope you are really on the mend now.be

I already knew most of the details from the past 2 weeks, but when it's all presented like that it's a bit mind boggling! So glad that today was a better day and I hope you have many, many more.

I think you get a gold star for your lack of complaining. I can't say I would be so quiet about all of that. :)

Gosh, you really have been through the ringer. Are you sure you're only 26? :)

Holy shit, Kyla. You're way too young to be falling apart! Maybe your crazy non-stop life is catching up with you? I hope you are done with the health issues for a good long while.

I won't begin to compare cycle stories because they are too miserable to even discuss. I'm SO sorry you had such a rough time! As active as you are all the time, I know these past two weeks MUST have been hard on you!!!

Oh, Babe. You are such a trooper.

dude I had a ruptured ovarian cyst about a year ago during a meeting with E's SLP. I was passing out from the pain and could barely stand, then threw up before passing out on the bed for an hour. I woke up and everything was fine, it was sooo weird.

I can't believe all that you've endured in the midst of a busy home and school schedule no less. Poor you! And yes, that Bubtar is out of control, in a good way.

Hey, Kyla. I'm so behind on my blog reading and commenting. I hadn't realized you were going through all this. Ugh. Not fun, not fair.

I hope your body is continuing to improve, and that you don't develop leprosy.