Say what you will about public school...

But I know my kids are well-loved there!

Yesterday at morning drop off, B (the awesome speech therapist) was the adult who helped BubTar out of the car. KayTar started pouting, because SHE wanted to get out of the car at B's stop! B told her that one day she would go to KayTar's stop and help her get out of the car, but that the principal wanted her to stay where she was for today. She smoothed things over with KayTar by offering to bring a book of Halloween jokes by KayTar's classroom later for KayTar to read to her. That did the trick. After school, I was delighted to hear that she really did find the time to bring the joke book to KayTar and I was over the moon this morning when we pulled up to KayTar's drop off stop and B was there (clearly not on morning duty) waiting for us!

Last week when I was in line, waiting to pick up KayTar, B came to my window. She told me that BubTar's teacher had asked her to evaluate his articulation and she wanted to get my permission. I've had concerns about his articulation and had actually planned to ask his teacher about it that very week, so of course I said yes. He struggles with his S/SH/TH sounds as well as his R/W sounds, and I've noticed that I've had to ask him to spell things lately to clarify what he is saying. He's young, though, and has many teeth in various stages of regrowth, so I was unsure how much of this was still considered age appropriate. Well, he was evaluated that same week and he is now attending articulation lab for the rest of the semester. If he shows adequate improvement by Christmas break, we'll stick to this arrangement, if not, then we'll move ahead with more formal speech therapy. After his first session, he came home and said he worked on this sound (and he made a sound that was like a combo of S and TH, which is obviously the problem). To clarify, I asked him, "Oh...was it the TH sound?" He says, "Oh yeah...that one or maybe it was S." Ha! Clearly he's in the right place.

We struggled with the decision to pull BubTar from his private school, though there were many reasons to do so (finances, time, changes at his school we didn't approve of), we were still very nervous. The start of the year was difficult, BubTar cried many mornings (which in the end had more to do with how little he was seeing me and much less to do with the new school) and I had seriously doubts about whether we had done the right thing in moving him. As the school year has progressed, I know more and more that we did the right thing. He's excited about school this year, he has access to more activities in his school, they have an extensive library and he is just gobbling down books one after another. Although much of this year is review for him (his last school had advanced curriculum), his teacher provides extra challenges for him when necessary. His behavior is so much better this year than last, not that he's ever been in much trouble at school, but the difference between last year and this is noticeable. Also, he has access to speech therapy which is something that would have been entirely unavailable at his previous school. Most importantly, the staff at this school know both of my kids and obviously care for them, which is not something I would have said about BubTar's private school. They are interested in helping them succeed, whether that means putting KayTar in an advanced reading group or noticing that BubTar needs a little help with speech and setting him up with appropriate services. I hear a lot about the negatives of public education, but our experience has been quite different from all of that. I know that when I drop my kids off in the morning, they are in excellent hands. That is a good feeling. 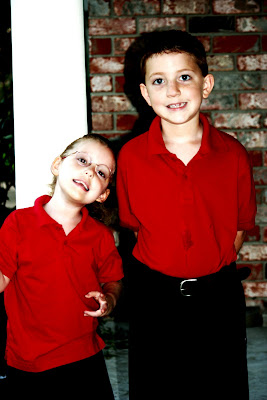 I love my public school, too. We've had a wonderful experience so far. It must be such a relief to you that it's gone this well and that you have such a great staff at that school.

sounds like you made the right decision for you and your kids. we love our public school!

Public school is the way to go here...in Baton Rouge where J came from? Not so much. I'm so glad you're having such a positive experience...its so great that you're getting all these signs right off the bat that you indeed made the right decision.

I too PRAISE the public school my child is in. My son has ADHD - and is now in 8th grade. Every teacher, every principal, every nurse, has been nothing but wonderful. It is such a relief to know your child is getting the best education AND care. I am so glad you have found a great place for Bubtar & Kaytar!

This is so good to hear!

I have been (mostly) please with my kids' schools so far.

And Dash has the same letter issues. I was told that until age 9, it is still considered developmental. Now, at 10, he is mostly fine, unless he gets lazy (which does happen).

Kyla that's awesome. I did Kindergarten myself in a private but then had public education from first grade through college and so I'm a big supporter of public schooling done right. It seems like your kids are both in great hands. And also? That B. deserves a medal, what a great person to have at a school.

It's great when you really know you made the right decision.

I loved school when I was a kid, and I always went to public school

AMEN! Thank you for publically recognizing that public schools are NOT the messy, chaotic, heathenistic places some people believe them to be! I'm SO thankful that both kids are happy and enjoying the year! YEAH!!!

What an incredible blessing that school system is. We'll be doing public school as well and I only hope my kids end up in as good of hands!