I seem to have lost my groove. I have missed two Biology lectures and two Chemistry lectures in the past month or so, either due to my falling apart or KayTar's recent illness. Prior to that, I hadn't missed a single one. Last week I got behind in my Composition II assignments, they were completed on time, but I procrastinated right up to the last instant. I've only missed one volunteer shift at the hospital (when I was hobbled by my defective knees), but I've missed 3 volunteer days at the school library, 2 due to my injuries and 1 due to KayTar's illness. Today I should be there, though it isn't my regular day, because it is the Book Fair and I really wanted to help the librarian this week. This weekend Josh and I were scheduled to host a game night (we even had my parents slated to keep the kids overnight) but we had to cancel it once KayTar spiked a fever. On the invite I even wrote something like AS LONG AS THE KIDS DON'T GET SICK, KNOCK ON WOOD. Evidently, the knocking on wood was ineffective. I have a poetry analysis essay due (I hate poetry, HATE IT) at the end of this week and a prospectus for an 8 page research paper due next week in Comp II. I have a Biology exam over cellular respiration and photosynthesis a week from today. My Chemistry exam is soon after that. Life is happening, but that extremely efficient routine I had going has been disrupted and I'm having a bit of difficult getting with it again. It is a feat equivalent to jumping back on a high speed treadmill, really. We all know how that ends.

Yeah, that.
I can't really tell if KayTar is improving yet or not. Wednesday we were up all night, coughing and puking. Thursday with the help of medicine she slept, but had very little to drink all day. Friday she didn't drink, but we gave her 8 ounces of half and half (Pediasure and Pedialyte, the lighter mix helps her to keep it down when she is heavily congested) through her tube, and she slept some. Saturday we tubed her 16 ounces of half and half, but she was up coughing and vomiting (due to the coughing) in spite of medication from 4-6am, after going to bed at midnight. Sunday we tubed her 12 ounces of half and half , she napped for 3-4 hours, and slept well after going to sleep at 1am. We've been giving round-the-clock doses of Benadryl and Albuterol, plus Ibuprofen when her fever spikes. This morning she asked for chips and Pediasure (regaining an appetite seems hopeful), but she only had negligible amounts of both and specifically asked for medicine to help her feel better, plus she is complaining about her bones hurting. It is a toss up this morning. I'm sure she'll be on the upswing pretty soon, but it has been almost a full week (last Tuesday) since she has had a regular amount of Pediasure, which makes me a little nervous. It has been 95 since her last episode and we'd really, really, REALLY like that number to keep rising. 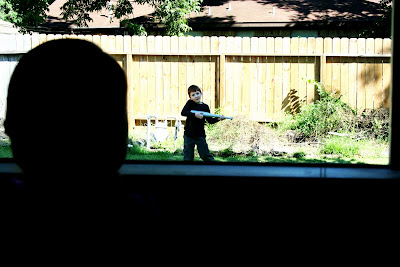 We're having gorgeous weather, so KayTar spent part of the day watching her brother out the window while enjoying the cool breeze. I think we would all be outdoor people if we had that kind of weather more often! 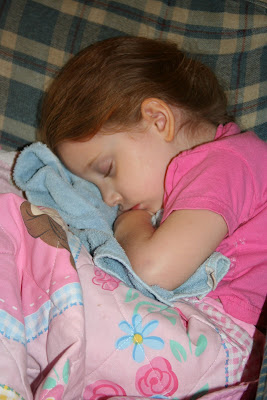 All that vicarious playing and fresh air wore her right out.
Posted by Kyla at 9:51 AM

Labels: KayTar, life with the tars, me, school, sick

Maybe it's not the time for school right now. I don't know. Hope your daughter is better soon. Mucous does it for my girl too, causing gagging which leads to vomiting. Take care.

School is fine...no time is EVER perfect. I've got a 100 in Biology, a 97 in Chemistry, and a strong A in Composition II (though I don't have an exact number as my professor is behind in her grading). I just like to feel more on top of things, even ahead of things, than I currently do is all.

I know you can do it! You've accomplished so much already. Hang in there. It does sound really hard right now, but you've overcome bigger obstacles in the past!

she just reminded me of a little bitty smidgeon in an ultrasound in that last picture.

Oh, Kyla. You have your groove...you are just human. I mean, the nerve.

don't worry- you'll get your groove back. That happened to me right in middle of the semester too. You'll pick up steam again.

And I have to say I shuddered a bit at the "12 ounces of half and half." I guess you gotta do what you gotta do to get some meat on that girl, huh?! Too funny. :)

Wait- maybe you didn't actually mean "Half and Half" ??? Did you mean half pediasure, half ...nevermind. I feel dumb but I'll keep this comment how it is so you can get a chuckle out of it.

I'm such a dumbass.

LOL, Sheree! Yeah, I meant 1/2 Pediasure, 1/2 Pedialyte...we call them "half and half feeds" around here. You did give me a chuckle, though.

that video IS a hoot.

getting out of routine is really hard, i hear you.

but I'm sure you have a pile of color coordinated index cards to help you get back on, right?

you're amazing, Kyla. Amazing. Even when you do feel a bit like a gangster who gets knocked down by the treadmill.

Life sure keeps you on your toes! If we always had our groove, I guess we wouldn't appreciate it so much?

I don't know Kyla. Maybe you need to wear protective gear if you're going to trying jumping on a moving treadmill. Oh, you meant that metaphorically?

I know what you mean about feeling discombobulated. When you're used to having your act together, and then life throws you for a loop, it's tough to accept that you can't do everything as well as you know you are able to do.

I also emphathize with your feelings about poetry. I had a British lit class with a really good professor once, though, and it really helped me overcome my anti-poetry prejudice.

oh kyla, this is rough. sometimes poor kaytar (and poor mom!) just need a break from it all. :(