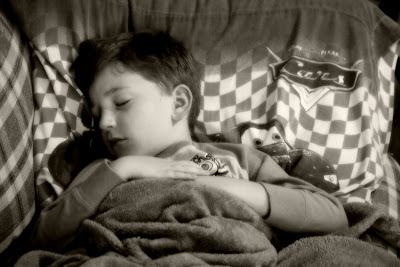 This little sickie started running fever on Thursday morning. Early Thursday morning. Is-this-even-considered-morning Thursday morning. He's run a steady low grade since then. He missed two days of acheivement testing! We didn't take him in to the pediatrician because he didn't seem to be feeling too bad. Yesterday evening, his ears started bothering him. If he's still feverish on Monday, I'll take him in. He was supposed to go to my parent's house today to spend time with his cousins (and even go swimming!), but he'll be staying home instead. As you can imagine, he is less than thrilled. Poor little monkey. 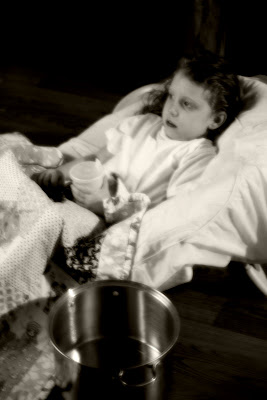 This little sickie started vomiting out of the blue last night. It happened once, I cleaned her all up, put her in the sick seat and I stepped outside to talk to Josh about her meds (he was doing yard work). We were debating whether to give her Zofran, but didn't really come to a consensus. I came back inside and BubTar said, "Well, she just threw up EVERYWHERE." Zofran debate solved, instantly. And by the way, transdermal Zofran is a genius invention. If your kid can't keep anything down, are the liquid meds are going to make it through? Nope. Though, if you rub it on their skin, they can't yak it back up. Perfection! She continued to vomit last night, but with round-the-clock doses of Zofran (like say, setting an alarm for 3:30am so she doesn't miss a dose) it seems to be under control for now.

She's kept a small amount of water down this morning, though, we are playing a little Dry Diaper Roulette. As long as she holds down some clears this morning, it should work itself out. She also seems to be acquiring a bit of a germ phobia. I caught her swiping at her arms and shrieking "Get them off! Get them off!" the other day, which was a mildly disturbing sight, but it turns out she had touched something of her sick brother's and then thought his germs were attacking her. I said, "Well, let's just go wash your hands." But it didn't end the preoccupation. Every time stomach starts to hurt, she shouts, "Moooom! The germs won't leave me alone!" This morning she woke up and said, first thing, "The germs are still getting me! I need to wash with soap and water to get them out!" Poor kid.
Posted by Kyla at 8:04 AM

Ugh ... so sorry they are both so sick! I hope they start feeling better fast. I know how she feels when you just want to wash your entire self to get the germs away - poor girl. Transdermal Zofran sounds like a miracle!

I can SO empathize with Kay-Tar. I have a terrible germ fear related to vomitting. I am COMPLETLEY obsessed with the H1N1 virus and check the status often. How many have it? Where are they? Is it getting closer to GA? I'm sending germ warriors your way.

Germs will travel. We've got 'em and they play dirty.

Tell those little sickies to get better soon!

Go away cooties, go away!

I'm so sorry your going through this, bu I have a tip that may help:
As Swine Flu is spread by human to human contact, and children are the # 1 spreaders of germs, it becomes imperative to educate children on how germs are spread.
Young children don't spread germs because they want to, they don't know how NOT to.
Germy Wormy Germ Smart for Kids educates and entertains kids while teaching them how to NOT spread germs.
Please pass along to anyone who has young children and is concerned about the spread of the Swine Flu: http://www.germywormy.com

Blech. Poor kids. Poor you. I hope all those germs run away from your house soon (and not towards mine...please?)

oh man. you deserve from very healthy teen years from these children, that's all i have to say. ;)

that and i hope they're both beginning to mend.

Sending lots of lovin to the Tars!

Oh no, the poor 'tars. I hope they feel better soon...