Yesterday KayTar had a neurologist appointment and while we were at the hospital, we also had her labs run (a new RAST level for her nut allergy). At check-in, she asked me, "What are we doing here?" And I said, "I don't really want to tell you yet. I'll tell you in a little while, though." To which she replied, "Ooooh! Is it a SURPRISE! I love SURPRISES!" which made it clear that I would have to tell her, because a needle stick is a rather unpleasant surprise and I don't want to ruin the reputation of surprises altogether. "Well, KayTar...you have to get a little poke, but THEN YOU CAN HAVE A TREAT!" Alas, the cat was out of the bag and the laboratory waiting area was packed. We would have a long wait with a child who knew that she was about to get the needle.

In an effort to keep her mind off of the looming POKE, I pulled out her notepad and wrote a sentence in it, "KayTar is 4 years old and she likes flowers and butterflies." She loved reading about herself in her book and read the sentence several times. Then she pondered it for a minute and said, "You forgot something. Write this, 'She wears diapers.'" So I wrote it.

There was a very small baby sharing the bench seat with us and he was wearing a baby t-shirt with a blue, smiling whale on it. KayTar admired it and then said, "Write this in my book, 'KayTar likes whales.' Wait! Say THIS, 'KayTar likes HAPPY whales. And mermaids.' No, wait! 'KayTar likes happy whales and ARIEL.' Yeah, write that."

Then she said, "Oh! Start a new story! Say this, 'Dr. Neuro lost his clacker. His dog ate it or a kid broke it.' That's a GREAT story." (KayTar was looking forward to playing with his clacker, those plastic clapping hands that clack together, but sadly he no longer had a clacker. He first told her that his dog ate it, then he said maybe another kid broke it.)

The next time she got worked up about the threat of the needle, I suggested we write in the book some more, "What else can you think of that we should write?" And she said, while quietly sobbing, "You should write, 'Poke.'" I asked, "Anything about the poke? Should I write, 'KayTar doesn't like pokes'?" She said, "No, just write 'Poke.' and make it BIG." And that is how her story ended. 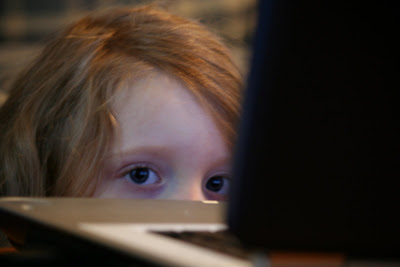 The author peers out from behind her laptop.

PS: It is NOT mitochondrial disease. Although she has more mitochondria than your average bear four year old, the rest of her tests checked out okay. The neurologist said he doesn't really know what else we can test for, so it looks like we've come to the end of another road without any answers.
Posted by Kyla at 8:11 AM

What a kid! Love the picture too.

And I supposem knowing it it is Not, crosses that off the list. I will pray that maybe some new research, will give you answers, one day.

It's so sad that her story always ends in a BIG POKE. :(

Hopefully one day you'll find y our answers and she can write a new ending... a happier ending.

Oh that last bit about poke, written big, that choked me up. Poor kid. But what a storyteller!

What a great storyteller. I love that she has such definite ideas about writing style. (Does she write at all yet herself?)

Poor kiddo. Always with the poke.

And poor you. Always with the no answers.

Good thing she's got the serious cutes and the crazy smarts to counterbalance.Not to mention the great sense of humor.

I loved that picture as well...

Some kids are enigmas. T. also has more mitochondria than most kids, and high cholesterol and lipids, and strange this thing and that thing...but our doctor concluded that if you ran extensive tests on most kids at least one test would come back out of the norm on every single one of them. Most kids aren't tested as extensively as ours are...but it's the pits to have no concrete answers.

A fine story teller. She knows when to edit and how to use emphasis.

this was super cute

I hate telling my kids about their pokes too. :(

I hate pokes. Seriously. I cannot stand holding my kids down for them.
Have you tried Emla patches? I don't recall you mentioning them. At the very least they might provide some placebo relief.

I hate the 'no answers' part of this post. She really is one of a kind, isn't she?

i just want to give that wee blogger a great big hug!

Sad for the no answers, happy it's not mitochondrial disease. I love her story but am not crazy about how it ends ... hopefully y'all can add to the story today and it will end on a happier note! (Great idea for keeping her occupied during a long wait by the way - I'll have to remember that.)

Poor, poor little author. And that one word poem says so much.

Gosh. I can't decide if there is a sign at the end of the rode that clearly says, "DEAD END."

Or the road just comes to an end with a beatiful, full forest ahead.

However the road ends, there is a wonderful, talented little girl there with you. And on the other side of you is a most handsome boy and his daddy. (their daddy...your husband. You know what I mean!)

Hi found your blog a few days ago and iv read all of it since then!

First would like to say what a wonderful girl KayTar is .

Now going on to say my daughter Chloe is 2 years in June and since 3 weeks old Chloe as the same episodes as KayTar ( well they sound the same) and we have gone under so many tests which are clear and our neurologist came up with the idea it was bpt (Benign Paroxysmal Tortillas) but am not convinced , would like to email you with more details if i can about my Chloe episodes?

If Kaytar had a blog I would read it. Because she rocks. And I hate pokes too.