KayTar and I argue a lot--maybe argue is the wrong word, she has an opinion and I have a different one, and we voice them repeatedly--nope, I guess argue IS the right word. I play along dispassionately, mostly to appease her, but she really enjoys herself.

For instance, the other day I picked up lunch for myself on the way to get BubTar from school because groceries at home were severely in need of restocking. Lest you think I am a horrible mother, I offered KayTar food as well, but she passed on it. SHOCKER! Well, we get through the drive through and she says, "Where is MY soda?" No food(!!!) does not mean no drink, evidently. The conversation went like this,

K: (speaking in the ranges only dogs can hear) SAY IT TO ME!

Me: Actually, it is MY soda.

K: Well, actually is is MY soda.

K: Whatever, it is MINE.

Hold up there tiny sister-friend, did you just say "Whatever!" to me?

And then it hit me, she sounded JUST.LIKE.ME.

You see, we have these little conversations about 100 times a day. Over everything. Maybe I say that I like a certain thing and KayTar assures me I DO NOT like that specific thing. Or maybe she wants to wear something that is in the dirty hamper. Or maybe she wants to watch something that isn't currently on TV and she assures me that, actually, it IS on TV! Or maybe she wants defend her stance on the idea of spontaneous generation. Whatever. We go round and round all day long because she loves the repetition and back and forth of it. We even argue when the answer is yes, as seen below:

K: Can I do coloring?

Me: Yes. Here are your crayons and pencils.

K: Ohhh! Can I do coloring?

K: But can I do coloring?

Me: Yes, you can do coloring. (stepping away slowly)

K: But CAN I do coloring?

Me: Hey K! Can you do coloring?

Me: (smugly thinking I've settled it)

K: But Mommy, can I do coloring?

Even when I go quiet (as seen above) she keeps poking until I've given her a satisfactory effort. Eventually, though, I tire of it (after we've discussed the exact same thing, oh, 750 times or so) and need a way to opt out. Well, as I realized in the car that day, my way to opt out has been saying, "Whatever." under my breath. Look at me, being a responsible parent! But usually, once we get to the Whatever Stage, she is able to let whatever the argument of the moment is and walk away happily. It works. Well, a couple days after the soda-whatever incident, I figured out WHY she walks away happily.

K: Can I wear my costume now?

Me: No, you have to wear your uniform today.

K: But can I wear my COSTUME now?

Me: No, you have to wear your uniform.

K: But ACTUALLY, I LOVE my COSTUME. CANIWEARITNOW?

Me: Actually, you are going to school and have to wear your uniform today.

K: But I can wear my costume.

Me: No, you have to wear your uniform.

K: But ACTUALLY, I CAN wear my costume.

Me: Nope. You have to wear your uniform.

K: BUT I WANT TO WEAR MY COSTUME (slipping into sing-song voice) and be a beeeeautiful mermaid.

Me: I know, but you have to wear your uniform.

K: But I have to be a MERMAID!

Me: Not right now. After school you can be a mermaid, now, you have to be in your uniform.

K: Mermaids don't HAVE uniforms! (slipping into sing-song voice) And I am a beeeeautiful mermaid.

Me: Sorry kiddo. No costume.

Me: (kind of taken aback) You want me to say whatever?

Me: (curious) KayTar, who wins when I say "Whatever."?

Ain't that the truth, kiddo. 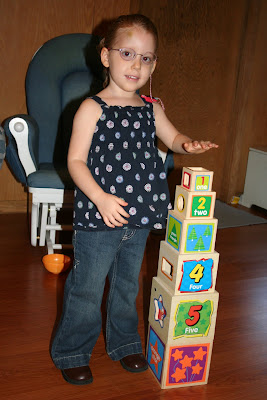 Oh, I shudder to think what the arguments will be like when puberty strikes!

That whole post cracked me up! What a character. We have similar arguments at our house, but yours are tops. KayTar doesn't miss a thing.

Imagine her and The Baby hanging out. HAHAHA. That would be hilarious.

She cracks me up! What a handful.

(Did you happen to get my email? I caught a picture of a "princess" with glasses for K.)

Isn't it just scary/hysterical when your words come out of their little mouths.

These conversations could easily have happened at my house, too.
Isn't it strange to hear yourself in your kid??

She sure does have things figured out. Smart cookie.

OH, she cracks me up!

And I love that picture of her- she looks so confident and cute!

I love how she's evolved SO MUCH with her speech. She talks like her mommy!

Oh, that is just perfect! Such honesty ;-)

HIlarious. Is she four? Cause that sounds totally like four to me.

It's so much funnier when it is someone else's conversation. LOL.

Man, that sounds like a similar "conversation" in our household. when it starts up, I hide.

Cameron also pulls the "oh, whatEVER" card on me ALL the time! lol

Well, she would be a beeee-u-tee-ful mermaid. Her logic is impeccable.

I'm glad no one was in my office because I was laughing out laugh. That is so funny.

Here's a new one overheard at our house the other night: whatever major loser.

Um, what?!!! Homeschooling looks more and more attractive each day. Except for the 'home' part. And the 'schooling' part.

This is absolutely hilarious. Just wait until those teenage years. I feel sorry for Josh and Bub already! :)

Too funny. Especially it isn't happening to me.

Do you budget all sorts of extra time into your routines just to allow for these .... "discussions"?

Kyla--this is hilarious! I'd love you to tape one of these discussions!

Head meet table, repeatedly, conversations; that's what I call them. ;-)

We should get the Boy and Kaytar together, and then they can have these types of conversations amongst themselves. The Boy's most used line is "But I DO want to...(insert wanted thing here that I just said no to)"

Yay Kaytar. You officially win Teenager Who is Not a Teenager Award of the Year!

Oh my goodness! She is a smart one!

I'm pretty sure that our girls would get along great (then they would gang up and make us both cry). I feel for you sister friend, I really do.

Sometimes it's good to clear up who always wins--just so you BOTH know!

My opt out tends to be, "I am not arguing with you about this." Because Pumpkinpie in the right mood will totally argue that black is white against all reason just because. Makes me crazy, so I decide not to engage instead, for my own sanity.

I could have written this post about Henry. He loves the back and forth, the speech rehearsal.
Whatever always come out in the end.

I have that same coloring conversation about 10 times a day with my 3.75 year old kid that refuses to use the potty

How utterly funny!!! And terribly exhausting! Smart little critter! She must be like her mommy!

Those are some funny, funny conversations. Arguments. Whatever!

That is hilarious and wonderful and maybe a little scary (since I'm living on the other side of cute.) I had to learn to tuck "whatever" deep into my pocket and never let it peep out. Winning is dangerous for my daughter. She's a fast addict and expects it the next time. So, instead of letting the familiar discussion/argument play out I have to totally change the cadence of what I'm saying and make it decisive and maybe shocking. Like: "OK, you may wear your costume as soon as you come in from school. For now, put on your uniform. This is your one chance. If you argue the point with me you will lose your costume and not wear it until tomorrow." I have to follow through with it, 'cause invariable she loses whatever it is a few times and there is much shouting involved one sided. I calmly get ready with my own things. Sooner or later though there in no more discussion about mermaids and getting ready, but instead a singsong like this, "I can wear my costume when I get home from school, right? I'm doing a good job, right? It's time for my uniform now but I'll be a mermaid soon. I'm such a good kid and mermaids are good too, right?"