KayTar's surgery.
We are a little over a week away from the Big Day (November 4th is both Election Day and Surgery Day, a doubly big day). She has made it through TWO FULL WEEKS of school and is drinking all of her Pediasure every day and it makes me wonder if we're doing the right thing. Of course we are. I can't make a major decision based only on this glorious moment in the sun, but parental guilt and torment know no reason. Letting someone cut into your child is definitely guilt and torment inducing. Isn't it fun to be me?! School.
Guess what? It is time for exams. AGAIN. A&P II lecture exam on Tuesday, Microbiology Lab exam on Wednesday (written this time, not practical), and I'm also going to have to take Microbiology lecture EARLY, as in this week, because it will be given while I'm in the hospital with KayTar next week. As soon as I get back, it will be time to take an A&P II practical on all the veins, arteries, and internal organs. You're jealous, aren't you? 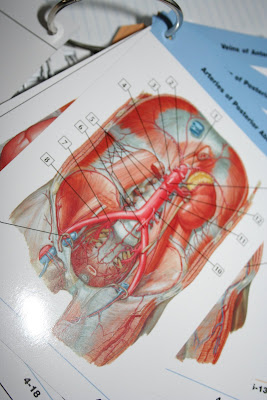 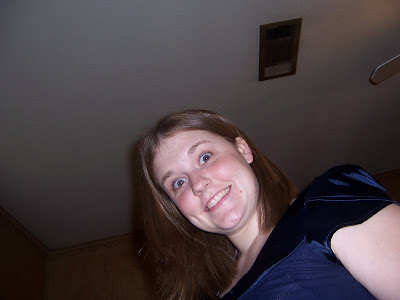 Hindsight is 20/20.
Last night Josh and I watched an old video of the kids. The video started at the Christmas before KayTar was born (I was about seven months pregnant and BubTar was about six months shy of three years old) and ended when she was six or seven months old. We were shocked at how coordinated BubTar was, how he could run and jump and walk on GRASS! He didn't sit in a W! We were shocked that he was capable of having real conversations. We were shocked that he was just about outgrowing pajamas that KayTar is barely growing into. HE WAS A WHOLE YEAR YOUNGER! We were somewhat less surprised to see KayTar spontaneously gag, gag, gag, VOMIT as an newborn. We were also not surprised to see her stuck on her back at six months of age, not holding her head up, not doing much of anything, while her similarly aged cousin crawled and sat and rolled and made eye contact. At one point KayTar made a cooing noise and I said, "Did you hear that? She said, 'Start me in developmental therapies now, please!'" Ha. Hindsight is a HOOT! 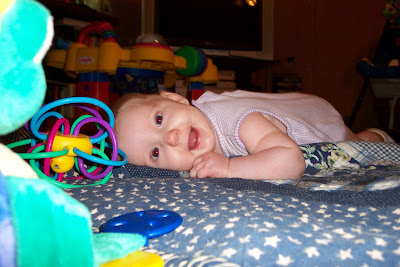 Television! Awesome Kyla! If there is any video of it online you'll have to share it with us :-)

I know all about that guilt, having opted for two voluntary surgeries for E-boy myself. But those decisions dramatically changed his quality of life, so I'd do it again in a heartbeat. Just remember, it doesn't have to be permanent.

What does A&P II stand for? Somehow I don't think it's the convenience store clone of the A&P supermarket.

Crossing fingers for surgery and all that. The interview - um, you're on your own. It's all said and done now anyway. Right? You'll do great!

Wow, can't believe November 4th is going to be so huge for you.
I'll definitely be sending positive thoughts your way.

Worse comes to worst you can always have the G-tube removed when Kaytar develops her palate and starts ordering mid-rare filets, in the meantime, no harm no foul.

I'm sure that you did a great job with the interview - and even if you didn't (which I doubt), it's their job to make the interview good television, right?
Ah, maternal guilt. You're making the best decision you can for your child. Hold fast to that.

you ARE doing the right thing. I really admire you Kyla...you are SO strong and inspiring!

I think you're doing the right thing, too, though I definitely can understand the Mama~guilt.
And what a beautiful baby she was (and still is)!

Oh Kyla. You made me laugh.

1. Yes, you are making the right decision. But YAY that Kaytar will be healthy going into surgery.

3. Being on the news would scare the tar (no pun intended) out of me too. But I am sure you were brilliant and adorable.

Good luck on all her exams and on the surgery.
Thinking of you!

This is definitely an exciting and yet also terrifying time for you guys. I'll be thinking of you lots these next couple of weeks.

So exciting about the news! Good luck on your exam. And I'll be thinking of you and your family on the big surgery day for sure.

surgery and presidential election? AND exams. ye gads. well, I guess you'll have something to read in the waiting room. Because it will be so easy to focus, I'm sure! ;)

What a sweet picture of your little girl. Don't second guess...You are amazing mom and I am continually impressed with all you deal with and with such grace. Continued healthy thoughts.

What is Kaytar having surgery for? (This is my first visit here). I hope all goes well. She looks like a trooper.

What are you studying in school? I've had a few anatomy classes in my time too.

But how beautiful is that little face??

Just remember that you are always super critical of yourself on television. Whenever people have taped my plays, I try not to watch them at all.

My word verification is "baccula". Spooky.

You know, I was thinking about this earlier...I find it absolutely, perfectly fitting that Miss Kaytar is having her monumental surgery on such a day. I mean really, after all that mother of hers has advocated, it seems only right!

That certainly IS a Super Tuesday, if I ever knew one...

Hindsight is 20/20 of course...we noticed all the same things with T. and people just told us kids develop differently, etc. etc. But T. didn't hold her head up until nearly 6 months of age, and when we look back on her pictures we realize how different things were with her--and not in those usual ways.

Woo hoo on the interview!

Good luck on your exams .. not that you need it.

Oh yes, it's like calling the ambulance and suddenly feeling fine, despite something major going on. I know. She is going to be great, more than great - she is going to soar!

And you are too hon.

I feel the same way when I watch old home movies too. I think it's harder to see clearly in the middle of it. Hope the surgery goes well and the exams.

I love that pic of KayTar, she's so pretty.

Anatomy sucks but it's so practical, you know, to know all that body and circulation stuff. You will do great.

Love the baby pic! What sweetness!
You have been tagged (read my blog)
I am sure you have done this before.
I just figured with all the excitement in your life, you would have more stuff now!