BubTar seems to be coming down with something again! If you're keeping track, that makes 1 week of healthiness for every 2 weeks of illness so far.

Week 1:
BubTar is absent for 1 day, but is sick through the weekend.

Week 3:
KayTar is absent for 1 day, not due to illness. It would have been 2 if Monday wasn't a holiday, though.

Hopefully it will be nothing. A cold, perhaps. A nice, soothing, run of the mill cold. Half of me thinks (read as: hopes) that will be the case. The other half is wondering if we should go ahead and start a pool for the next round of "Will My Child Urinate Today?" It also makes my insides buzz with a low level of anxiety, because truth be told, KayTar's intake is still way down and another hit of illness will flush it right down the toilet. Ah yes, all it takes is a runny nose to strike fear into my heart. I am so brave.

(side note: This weekend I was watching House and doing laundry. KayTar came in the room and was watching at it while chatting me up about something, presumably the fact that she really wants a WordGirl costume. There was a patient in a hospital bed thrashing about because she didn't want her blood drawn or something to that affect and KayTar said, "Oh, she is VERY brave. I am not brave anymore. I'm feeling BETTER! I don't need to go to the hospital anymore." Yes, my child thinks that brave and sick are synonyms because she only hears brave in terms of tests and trips to the hospital. Lovely.)

Anyway, back to my phobia of runny noses and KayTar's intake. Before she started school, when she was healthy, her intake looked like this:

Even if she only had her Pediasures, that was roughly 700 calories. If it was a really good day and she ate everything, maybe she would hit 900 or 1000.

Now that she is in school, her intake looks like this:

Part of the problem is that she is in school when she was previously napping. Naptime was when she had her lunchtime bottle. The other part of the problem is that now that she doesn't nap, she is too tired for her bedtime bottle. She just falls straight to sleep as soon as her head hits the pillow. While it has solved the problem of KayTar the Night Owl, who used to stay up with us until midnight, it has definitely created another problem with her nutrition. Consequently, because she is only getting 1 bottle of Pediasure per day, she is also only getting 1 dose of her Miralax per day. This weekend we came very close to having another fecal midwifery situation on our hands and those just are not pleasant for anyone.

So, BubTar is a little tiny bit sick, so little that I didn't even contemplate keeping him home, but here I am fighting the urge to pack our hospital bag already. Her intake is just so poor on a "good" day (yes, the so-called good deserves some air quotes, I think), even a slight infectious breeze is enough to do her in. We're still only getting 1 or 2 wet diapers from her a day and she is HEALTHY. Add in a little illness involving a sore throat or enough drainage to make her feel nauseous and there you have it, the scales have been tipped in an unfavorable direction. Ta-DA!

Usually I do some sort of wrappy-uppy thing at the end of these kind of posts, but I accidentally hit the publish button a second ago and now there is a timer in my head counting down exactly how long it takes someone to click over from their Reader to find this post in all of it's unfinished glory.(Is there some way to retrieve a post once you hit publish? This might be good to know.) The blinking numbers in my mind make it hard to come up with some sort of witty or intelligent summary sentence, so instead, LOOK! A REALLY CUTE KID! 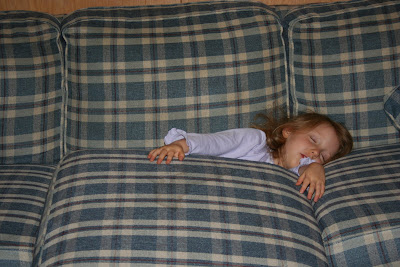 PS: She's totally faking. Someone probably just said, "KayTar! Time to eat!" She's clever, but we're on to her.
Posted by Kyla at 9:20 AM

Love the picture! Funny girl. And I would send you non sickness vibes, but I don't seem to have any at the moment, or at least they are non-functioning.

That picture is hysterical!! Hoping it's just a tiny cold, for everyone's sake. You guys deserve a break!

No sharing your sickness, Bub-Tar! Seriously, hope it is as mild as can be and you can get some more food in that girl. And please, god, no poop midwifery.

that picture is too cute :)

Sucks that BubTar is sick again but my guess is it'll just take a while for his system to get back into the groove of school.

I hope Kaytar starts eating/drinking more for you. I know that has to be SO nervewracking.

Sending healthy dust your way!
I can only imagine the anxiety you feel.
I would too!

That picture is totally cute!
What a doll!

Things are just a balancing act right now, aren't they. For both your childrens sakes I am praying for no sickies in your house!

Hugs, Kyla. I know this is so hard.

she is totally sneaky! I love it

Crossing my fingers that the illness doesn't spread to the precious wee girl.

I have done the premature publication thing in the past. I don't know how to undo it. I usually just pull up the post, copy the text into a new unposted page and then delete the unfinished one. I iz teknikal.

I'm no stranger to pre-mature publication. It's always so embarrassing.

Will the school give her a bottle mid-day? Or otherwise try to coax her to eat. Sometimes, kids will try harder for role models who are not their parents.

oh, babe. wishing you all the good health vibes for you and yours that the world holds!

hopping (er... i mean HOPING, but if hopping would help I'd do that, too) that the sniffles end with bubtar, and all is well

it seems the only time that readers pick up my posts immediately is when I didn't mean to publish them.

That picture is priceless.

If you post before you're ready, just go back and hit "save as draft" (or whatever it's called). Poof - it's a saved draft again. I do that far too often.

She is clever! That position sure looks super comfy to me.

So sorry that BubTar might be getting sick. I'm not liking the healthy/sick ratio too much, though, that's for sure!

Wow. I get caught up in so much of the triviality that is my own life that I can't even imagine the worry you have about a "simple" cold. You have a right to worry. I hope you or the docs soon find a way to get more calories into Kaytar. She's adorable!

I never know what to say.... yay pediasure??!
where would we be without it?

I ALWAYS go back and run a spell check hours later. I am such an idjit.

Kaytar. Baby. She is making us crazy.

This time I sat for a minute before I could even think what to type. We get so personally invested in each other's lives, I think, in reading. It just seems like there must be a simple solution. I know better. Wish she'd just get hungry. Doesn't Kaytar ever just get hungry?

Your "PS" made me laugh! It's good that you can find a way to keep your humour when you're obviously stressed. Hugs to you.