I'll stop talking about this at some point.

To the Children's Museum

Last night I still fell asleep thinking about her hearing, about food, about illness, about the Button. So I probably didn't show Anxiety much of anything and KayTar will probably be sick within the week, but it felt good in the moment. We were free! Or we fooled ourselves into believing that at the very least. Either way, it was nice.

We are restarting sign language with KayTar, back to the beginning it seems. Once upon a time, it was her only communication, but her speech really began to emerge after getting her little purple hearing aid. Signing fell by the wayside much like her wee walker had, a crutch she no longer needed. Here we are again, though, feeling the the beginnings of a communication struggle. Our words are not always reaching her ears with the meaning still attached, so the hope is that sign in conjunction with speech will alleviate some of the confusion. The hope that this is all an imagined response to an incorrect hearing test is still trying to keep its head above water for appearance's sake, but I don't think it can keep it up for too long. We got her new hearing aid mold this week and it isn't fitting quite right, which causes copious squealing. It is loud and annoying and we ALL hear it. Except, well, she doesn't. It is squealing directly into her ear and there is no response from her. She used to tell us, "My ear is squealing!" or pull it out when that happened, but now, nothing. Just one more weight dragging that sad little hope underneath the waves. In the end, it can't hurt to reintroduce signing, but if we don't and the loss progresses? Well, we'd just prefer to work on it now rather than later.

At the museum, she spent quite a bit of time in the little mock-up grocery store...mostly counting things and reading the signs and labels. I looked around the store and realized, she eats absolutely nothing they sell. Nothing. A grocery store geared to children and she eats not a single thing that is sold there. Ice cream was an almost, but they didn't have vanilla which is OF COURSE the only acceptable flavor. At dinner, though, she ate part of a bread stick and dipped it in alfredo sauce, which was HUGE! She hates cheese, so dipping her bread into a cheese sauce was like a miracle. She also ate a few croutons and a small bite of my mom's birthday cake without vomiting. An offer of a second bite was met with locked lips and a stern head shake, but she ate a bite of CAKE with ICING on it! It was a bit of a miracle, really.

When I step back from the whole g-button thing, quiet my emotions and look at the facts, I know it is the right thing. It isn't taking anything away from her, she'll still be free to eat and drink what and when she wants, but it is giving her an advantage she doesn't have right now. The freedom of nutrition and hydration that isn't a chore. It will do for her nutrition what sign language will do for her communication, it will give her options, insurance. I know that is the truth of it, but the moments where I can disconnect my emotional response long enough to really believe it are still a bit farther apart than I'd like them to be. In between those moments of clarity, I question whether we are doing it for her or for us, whether we are making our lives easier or hers. I wonder if we are trading in the problems we know for unknowns, swapping things like strep and dehydration for site infections and granulation tissue. On this side of the surgery, even though we've made the best decision possible, it still feels like a bit of a gamble. Hopefully once we get to the other side of the surgery, it will just feel like relief, coupled with wondering why we waited so long to go through with it in the first place. 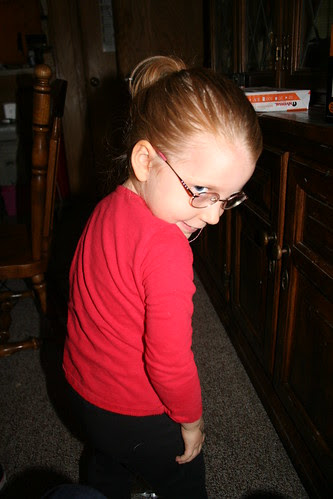 Sometimes KayTar is sneaky. Very, very sneaky.
Posted by Kyla at 10:41 AM

Sneaky and oh so cute! I think your reaction to the feeding tube is completely normal, but you are right. You are not taking anything away from her and if it helps you avoid a trip to the ER (or two) down the line for dehydration, well then, I think it gives you your answer.

I'm wondering if there are any families who have gone through this that you can speak to. Maybe getting information first hand will be helpful. To know that things will be OK. There has to be a forum somewhere that can offer this.

do you know how often you and your family are in my thoughts?

I am so glad that you got out and about. That is just needed to feel good. You are doing a great job. I think any parent questions themselves. You know she will pick up that signing in NO time! She used to knock our socks off with it before! Praying for you daily my friend.

I really do hope that is how you see it when you get to the other side of surgery - and FWIW I think you will (says the woman who knows absolutely NOTHING of which she speaks). But that's how I want it to be, so there.

I think you're getting insurance for all of you... but more for her. Sure, surgery is no fun, but in the long run she'll be better for it because she'll receive the nutrition she needs. And you? You'll get the piece of mind that she's going to be healthy... and there's nothing wrong with THAT icing on the cake!

I'm glad you got out of the house, and that some different food crossed her lips.

Oh my GOD that picture! I have to tell you I have that little girl in my heart so often.

Starting the signing will be good.

Keep praying and doing the important but not urgent tasks. It will heal your heart. :)

Why do we have to live on opposite ends of the country? I would so love to get ourselves and our kids together. I am not happy at all for the reason behind your decision to use more sign, but of course I totally encourage it and think you'll be amazed at how much she remembers and how much she's going to take off learning new vocabulary. It's quite a thrill for us these days. Be well, all of you.

I think waiting was wat I would have done. You had to know for sure. And really, she is just fine for the waiting, her glorious hair a testamonial to her inner will I think. ut now, you need to make those difficult decisions on her behalf.

I love that you lived on the edge yesterday, the museum, out for dinner. The show, they say, must go on.

Talk all you want.

You have a lot of stuff to process, a "normalcy" to mourn.

I love that picture, first of all. Second of all...it really sucks about the hearing loss progressing especially without knowing the reason WHY.

Hooray for her eating both the cheese soaked breadstick and cake with frosting. Wow.

I love those days of running around and feeling almost normal.
I wish I could guarantee you no infection or granulation tissue. Hoping not to jinx us, I will say that we haven't had a problem so it can, and does, happen.
Julia's gtube but its a bitter sweet thing. I know why we waited, I know why you are waiting. We wish they didn't need them, but they do.

why does everyone keep steeling my comments??!?!!?

um and my spell check...

You just keep talking about it all you want. That's what we're here for.

Oh, that picture kills me! oy.

I'm so glad you included her sneaky picture. It's a favorite, for sure.

I think you are doing all the right things Kyla. You never cease to amaze and inspire me.

Catching up with ya!

Love the pic of Kaytar. They can be so sneaky at this age. Can be cute and not so cute at times too.

I have told this phrase to many people, probably because I think it is so true.."The hardest decisions are often the best ones."

As parents, it is part of the job to question the decisions that we make. You are making the decision you feel is BEST for your daughter. And because of that...it is the right one.

It's so hard, isn't it? I've been worried about various things recently and yet normal life MUST be lived.

Worry and guilt are motherhood's chaperones. Talk about this stuff as much as you need to. Everyone here wants to listen.

That picture is the best.