KayTar's repeat hearing test is in a couple of hours. She's had a handful of them and while they've always been torturous due to her passionate disagreement with the sedative of choice, I've never been particularly anxious about them. I dread them, because KayTar is a belligerent little drunkard who won't politely pass out when drugged, but I don't fear them really. This time, the hardened knots in my stomach tell me things are different.

According to the last test, her hearing in her left ear has gone from a moderate to severe slope, to a profound to severe rise. Basically, it means that the sounds she used to be able to hear moderately, she no longer hears...not even with the aid of an aid. Before that test, I was partially expecting a change in her hearing...she has been missing sounds and getting confused by our speech lately and I felt like maybe something had changed. When the audiologist said there was a decrease, I nodded. "That's what I thought." I said. Then I asked, "How big of a decrease?" She said "30-40 decibels." That is when my stomach dropped a little. When I got the paperwork that said, "Profound." it dropped a bit more. Hearing impairment that can be scaffolded by a hearing aid is one thing, but hearing impairment that we can't somehow fix? That feels like something else entirely. Hearing loss that is still progressing? That feels like something else, too. It is scary to be faced with the reality that whatever has done this to her might not be done yet. Solid ground beneath our feet that has suddenly vanished.

Since the test, we've noticed her missing more speech sounds and seen various other little red flags that accompany hearing loss. Today, as much as I hope to hear it was all an error, I don't really believe it was. I expect to leave the office today with the same news as I did last time, with a belly full of lead and a mind full of questions that I can't answer for myself.

Today was a bit of a waste of time. We had to wait an extra long time to be seen (totally understandable as we've been the patient causing the hold up MANY times in there), so it was an extended waste of time. You see, KayTar wasn't really interested in the little testing game today and the audiologist wasn't really interested in trying to engage her in the little listening game. She wasn't defiant or cranky, she just wasn't really tuned in to the task at hand. So they gave up. QUICKLY. Too quickly for my liking actually. The audiologist did not adjust KayTar's hearing aid (which isn't a huge deal because if it has progressed to that level, the hearing aid won't help anymore) and she said we can try again in 3 months. BAH! (digression: my heart just temporarily stopped when I realized in roughly 3 months my little darling will have a feeding tube. Makes 3 months seem like no time at all, really. EEK!)

Rather than wait 3 months to repeat the exact same thing we did today, when we see her ENT next week for the tonsillectomy consult, I'll try to schedule a hearing test with his office (rather than the hospital) and also get her on the list for a sedated ABR with anesthesia (rather than chloral hydrate). I can ask him all the super fun questions regarding prognosis and treatment that are bouncing around in my head, too. Then we'll go from there. Of course, I'd prefer to have gotten a LITTLE information today, but this will work just as well, I suppose. 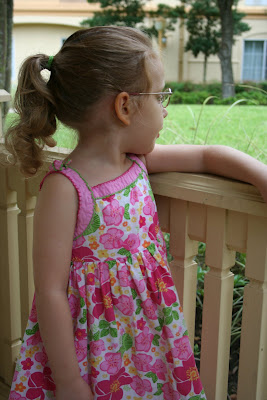 oh, I'm sorry babe. So frustrating for you - and I'm sure for her as well.

Sorry it was all so fruitless--how frustrating...

Knots in stomachs are the worst knots to have. So sorry today was "wasted" time when there are so many others things that pull for your attention.

I'll be curious (in the kindest possible way) to see the impact of lost hearing on the progress KayTar has made. Will she lose some of the speech she's gained? Will she become very frustrated? How will she communicate? How will she progress, in other developmental ways, after hearing and now not hearing as well?

I'm eager to hear what her doctor has to say.

Many hugs coming to you...

Oh, I hurt for you. I know this is not the news you were hoping for.

Oh, how awful, for you and for her. I'm sorry you have to go through it. Just so sorry.

gosh. This is all so super frustrating and I know I would have a "huge belly full of led" too.

Why three months?! That seems like a big gap.

It's not fair that such a beautiful little girl should have to deal with all of this...

I know I keep saying this, but it's what I feel. You are so strong. I can only wish you more strength and hope that things turn your way. If I had to choose only one person for a virtual hug it would be you. You need it all. I think we'd all give it all.

Sometimes I just want to shake people. Wait three months? Not good enough. I'm sorry you have to go through more trouble.

Sending you virtual love and hugs sweet one. You've all been through so much already, it just seems so unfair to add more to the pile. Kaytar is a little fighter and she is going to do well no matter what the outcome. Email me anytime hon. xo

3 months. They might as well have pulled your heartout through your throat. I'm glad you have ENT appointment. Maybe he can help.

Oooh, tonsilectomy! I got mine out when I was twenty and had a six year run of amazing health afterwards, plus I could breathe better at night. It took me 2-3 weeks to recover, but everyone I know who had theirs out as kids bounced back in under a week. Good luck with that!

The hearing thing really sucks and I hope you can work out some kind of solution. She already knows some sign language, right? So it won't be like she's totally cut off from communication, right? That's really good!

I can feel the stress in your words and I'm stresed for you.

What a waste of your time. I'm sorry you have to have more unanswered questions floating about in your head.

Next time you see your audiologist, you should ask about super power hearing aids specifically engineered for severe to profound loss. They fit the pediatric market as well and can help improve speech comprehension for that level of loss, among other things.

hugs, my dear. many, many hugs.

So much to do. So few real answers.