She doesn't look sick, does she? 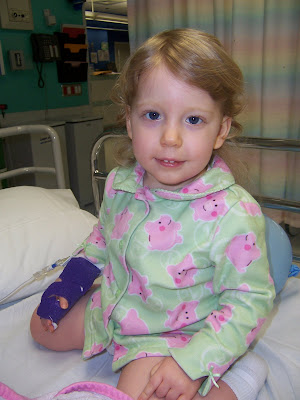 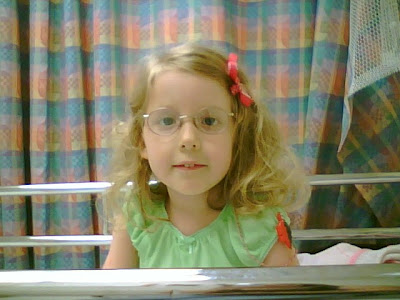 We have the top picture in a collage frame here at the house. As soon as KayTar was all hooked up in the ER she said, "Take my picture! Like in the frame at OUR house!" It kind of made me chuckle that she both remember the photo and the situation and place we were in when I took it. I had to make due with my pitiful camera phone, though.

In both photos, she is very dehydrated and her glucose levels are in the toilet. Most kids look like death warmed over. She? Looks like she was probably just jumping on the gurney. And she probably was. It just doesn't effect her the way it affects a typical kiddo. She continues to look well enough on exam, even when she's in a bit of trouble internally. Of course, I explained it to the nurses and doctors, but they still always look shocked when they get the labs back and compare them to her cheerful demeanor.

It's funny, after comparing the photos I realized she is wearing pig jammies both times. It makes me think maybe I should just stop buying pig pajamas. Bad juju.

She is such a different kid now than she was then, though. She was almost completely nonverbal then, she largely signed, sometimes in conjunction with sounds. She was not quiet for a MINUTE this time. I felt horrible for our roommates in the ER because of the constant chatter and party-like attitude. Their little poor baby was getting cathed and having blood drawn and my kid sounded like she was trying to gurney surf and throw a house party, despite her pitiful status. On the way to our new room the transporter said, "She sure has a lot to say, doesn't she?" because she commented on everything. "Oh, I like those stairs. Look an elevator. It is BIG. Number! Buttons! Look at the window. We're in the CITY. I love the town and city, Mommy. Where are my shoes? Look at your pretty shirt! I have my blankey. And bunny. Look at the floor. The wall is blue! Oh! Fishies! Look, Mommy, look! Are we going up? Are we walking? We're walking, Mommy! I see that sign! Are you carrying me? Is that my I-B? Look at my straw, in my hand. My hand is very DRINKY. It likes to have water in a straw. Mmmmm, so good water. In my hand!" and so on. And on. And on and on and on and on and on and on.

While we were in the hospital, she pretended that her IV arm was her "power hand" and we would bump fists and she would then shout things like "Power! YOU ARE A FIRE BREATHING DRAGON!" and then I'd have to be a fire-breathing dragon or a dinosaur or rocket ship. She only liked to bump fists with my left hand, though, because that is that hand with the "power gem" (my wedding ring). I accidentally used my right hand once and she said, "NO! IT DOESN'T WORK! USE YOUR POWER GEM! YOUR POWER GEM!" How could I make such a SERIOUS mistake?! They are going to take away my superhero license for sure if I pull that again.

I think that she's going to be just fine. The illness itself has passed. Yesterday she had spotty diapers and intake, but it was good enough. I expect today to be even better. WHEW. She surely keeps us on the edge of our seats, this rollercoaster ride of a child we've got.
Posted by Kyla at 11:45 AM

She sure does Kyla, she keeps us all on the edge of our seats! I wonder if the discrepancy between how she looks and acts vs. how she really is has anything to do with the sensory processing stuff? Just another piece of the mysterious puzzle I guess. E-boy is similar in that he doesn't register pain or complain when he's sick or hurt.

Good thing you guys had her while you're still young :-)

she is a total little powerhouse, is what she is.

"My hand is very DRINKY."

I love that child.

I bet she is a very good roommate in the hospital ~ how can you concentrate on being sick with such an exhuberant lil girl in the bed next to you? I am sure she's like sunshine to them!

Glad she's on the mend!

The monologue sounds hysterical! Last time Charlie got a serious fever (from an ear infection) he was up at 3:00 AM as cheerful and chatty as can be. And it was really funny because he only had about two words then.

So glad she is feeling better! She sure is adorable!

I just got this image of Kaytar on a stage rocking it out and pumping her fist shouting POWER!

Nothing is going to keep this one down.

Maybe her band will be called Power Pig Jammies. They will be grunge power.

someone please shut me up.

It is really amazing how far they've all come. I particularly relate to the amazing change from non-verbal to chatterbox.
Very best wishes

You're right, she looks absolutely fine on the outside.

Oh boy, that girl, she is gonna be able to do anything!

but you, babe...how do YOU look after the week you've had?

I have the feeling she'll continue to keep you on the edge of your seats for some time to come!

She is resplendent in her piggie jammies.

I just read all three posts, Kyla. I'm sorry your week was so fraught with worry, but I'm glad she's on the mend. She is so very precious.

Maybe you can enjoy a post-birthday birthday, once she is completely well again.

It's a good thing you have all those superhero powers to feed off of. She's so lucky to have you.

You do have superpowers Kyla. No one would ever attempt to take them away. It is a good think you have superpowers as she does look great. how else would you know to go to the hospital besides your supermom intuition?
So what is up with this kiddo and what is up with the docs not believing her mother? That would make me very irritated. Or probably just very irritating. When I am right about stuff like that I like to rub it in and by rub it in, I mean report it to everyone's boss.

Crap. you know I am so worried Julia is going to pull stunts like this. or should I say, continue to.
good thing I have you to lead the way for me.

I'm so glad to hear you sound so optimistic - she is such a tough little cookie.

i want to hug and squeeze you BOTH. RIGHT THIS INSTANT.

honey! does she ever sound amazing. like sunshine tumbling through an angry cloud, undefeated in its attempt to break through and be brilliant and be received and succeed in warming the world.

She's a tough little bunny! I love the differences in the two pictures of her... How are you doing, Kyla? Are you getting some rest now?

AJ and Kaytar would get along great together. He was a little chatty cathy in the ER on Thursday night...I put up posts about our weird "Mystery Diagnosis" week too.

Love the power gem and her drinky hand...

You jknow, I'm sure I've said it before, and I know you just deal with what you deal with because what else can you do, but honestly, most often, I don't know how you do it.

as hetha said up top, good thing you are still young and have energy!

Even when she's sick, her personality is just SO FUN!