Happy birthday to me.

We're home from the hospital, where we have been since Thursday morning.

She still isn't 100%, or near 100%, but the pediatrician and the doctor at the hospital kind of let me decide if we wanted to be admitted to medicine or give it a go at home. Our pediatrician is on call this weekend, so if we have to go back in because she still isn't eating or drinking (which is her current stance on the issue), it will be an easy process. But, KayTar is ahead of the game because they pumped her full of fluids for over 24 hours, so we have a little leeway if she keeps refusing, at least enough time for a shower and a night in our own beds. So I said, "YES PLEASE!" because it is my birthday and at that point the only thing I wanted was to be in clothes that hadn't been puked on yet, unlike the ones I had been wearing for well over 24 hours. Actually, that isn't really true, pukey clothes and all, it was kind of an agonizing decision to make and I hope I made the right one for her. I'm still pretty worried about how tonight and tomorrow are going to go, worried about the possibility of a return to the hospital. But for tonight, my birthday night, I'll at least get to sleep in my own bed and that sounds pretty good to me. Hopefully a night in her own bed will be good for KayTar, too.

Oh, and in case you are wondering? It took her just over 30 hours to finally wet a diaper, and 4-5 hours of that time she was hooked up to an IV, receiving fluids, and still not peeing. That KayTar, she likes to do it up big. Boy, does she. 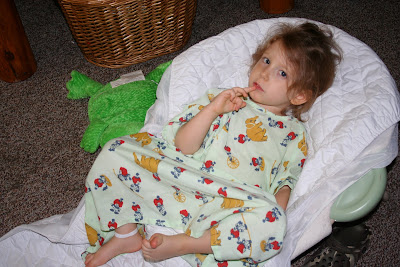 Home again, home again...in her complementary "princess dress from the hospital" or so she says. Also, I noticed that she's giving me the finger. I probably said something like "Why don't you drink some Pediasure?" as I was taking the picture, and well, you can see what she thinks of THAT.
Posted by Kyla at 6:33 PM

I am sooo sorry KayTar is sick! :( I really hope you all don't have to visit the hospital again any time soon! Hope you have a really good nights sleep for you birthday. (((((HUGS)))))

oh, kyla. i am so sorry that you spent the bulk of your birthday in the hospital.

but i'm glad KayTar's been rehydrated, and i hope hope hope she eats and drinks at home!

happy birthday, friend. may this be a year when you do not see the inside of a hospital, unless it's for your future career.

oh, it's your birthday, of all things - here's to many happier returns of the day & hope Kaytar stays nicely hydrated so you don't have to go back in anytime soon.

Oh Kyla! I was just thinking of you a few hours ago and thinking, I wonder how our little Kaytar is doing. Poor, poor dear. Poor mama who spent her day in the hospital smelling like puke and worrying about her baby girl.

Oh hon - what a terrible day. I hope she pulls through quickly and that you make the best of the rest of your birthday.

Happy Birthday, Kyla! I'm sorry it's been such a stressful one. I hope KayTar is feeling better and you manage to stay out of the hospital.

And then what Slouchy said... have as good a night as you can, and sending all the eating and drinking thoughts i can muster.

First, happy birthday my sweet friend and woah, KayTar sure knows how to wield that middle finger. I'm sorry she is sick and I'm sorry this is how you spent your birthday. I'm going to take her salute the camera as a sign that she is feeling better.

Coming out of vacation to say I saw this and I am so sorry.

Happy Birthday! I hope that the weekend goes more smoothly.

i have to say that sounds like a lousy birthday.
I hope things get better soon, for all of you.

Oh baby girl! That is so not fair that she feels so awful on your birthday. :(

kyla, sweetie, i'm so sorry this is all coming down on you. and on your birthday, love.

i'm thinking of all of you.

So sorry to read this post Kyla. I hope and pray things turn around fast for her. You guys don't deserve this!

Happy Birthday and glad to hear KayTar is on the mend...
Hope today is better than yesterday!

I'm so sorry KayTar was in the hospital. I'm so glad you were able to be home on your b'day. I'm SURE Josh had something special planned for you. Perhaps you can postpone your celebration until next weekend.

Oh, that is crummy, crummy awy for you all to spend any day, let alone your birthday, but I'm glad you have a tiny repite. Hope to hear that everything is good soon! I'll be thinking of you guys...

Happy Birthday Kyla! I'm sorry KayTar is so affected with this episode! I was reeeeaaaalllly hoping that she was licking them! Dang it!

Kisses to her and a glass of wine to you!
Gretchen

What a crap-tastic week you've had. I'm so sorry. I hope things have improved, and that you've all been able to get some rest. I'm thinking of you.

((((oh))) happy birthday, Kyla. At least you are home, though, on your birthday, with those you love.

happy birthday, lovely woman. i wish you much happiness, with your beautiful kids and husband.

(have been thinking about you often since your last post, and wishing good things.)

Poor little girl. Geez.
I am keeping her in my prayers, and I am hoping that this weekend sees her feeling all better and you finally getting some rest (and soem cake.).

yeah screw you mom and that pediasure you rode in with.

Damn Kyla I am so sorry.

oh oh oh. did I tell you my socialist government is covering our pediasure?

Damn Kyla. I hope she gets better soon. And you have a chance to celebrate your birthday (beyond showering and sleeping - although those are good things..)

Shit Kyla. Hope she's doing better soon and you don't have to go near a hospital.

The finger- very sly she is...

God bless you on your birthday I hope it's a restful one.

BTW my third is now throwing up!

Oh I forgot to say.

Remember to grab a little syringe of pedialyte and just squirt a little in her mouth every 15 minutes.

Hopefully she can keep that down!

Oh. babe. I'm glad you guys came home, hope your birthday is good, and wish health and happiness to you as a gift, starting right now.