That thing you do

My friend Sheree gave birth to her second child, Gabrielle, on Friday, May 9. She weighed 6 pounds 14 ounces and was 19 inches long. She is gorgeous. However, Gabby's oxygen levels were dipping and they had to start her on 60% oxygen and she is doing well. She had to stay at the hospital after Sheree was released. On Mother's Day, while one the phone with the pediatrician for an update, he mentioned that he was concerned Gabby might have Down Syndrome. Since then other doctors have examined her, and all are of the opinion that sweet little Gabby does have Down Syndrome. On top of that, the doctors did and echo on her wee little heart and there are a few holes in the wall and there is some debate as to whether they will close on their own or require surgery, possibly as early as 3 months of age!

Sheree has been given a lot of information to digest in such a short period of time. Being home without your baby, finding out about a genetic abnormality on Mother's Day, thinking about heart surgery for your baby who hasn't even left the hospital yet....it is a lot. And Sheree has started a blog! Would you all, please, stop by and congratulate her on the birth of her darling little girl and also leave some kind words of support. I've been telling her all about the amazing support to be found out in these bloggy parts, let's show her we mean business. 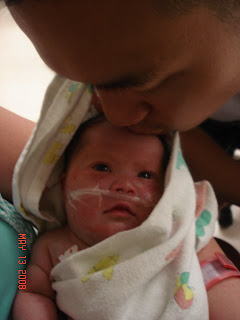 Gabrielle and her daddy
Posted by Kyla at 7:42 AM

you rock my world ;)

Thak you for sharing her site.

:) welcome to the world, gabby!! we all love you already!!

You know I will.

What a GORGEOUS photo.