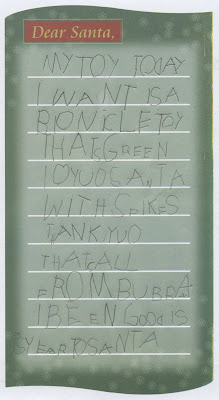 MT TOY TODAY
I WANT IS A BIONICLE
THATS GREEN
I (HEART) YUO SANTA
WITH SPIKES (referring to the green toy, not the loving of Santa)
THANK YUO
THATS ALL
FROM BUBBA (not his actual name, for the record, LOL)
I BEEN GOOD IS
IS YEAR TO SANTA

Ahhh, yes. What we have here is a rare form of the surprise, last minute, singular heart's desire Christmas gift, presented in its most heartrending form.

You see, Santa had BubTar's Christmas all figured out and ready to be packed into the sleigh. But yesterday, BubTar went to visit Santa and the single solitary item he asked for was this. A Lego action figure that costs roughly $10. After months of crowing about this or that expensive toy, when the moment of truth came, he chose only one small toy. Lest, you think it was a mistake, that perhaps his mind went blank while talking with the Big Guy, he came right home and wrote this letter all on his own. The cutest letter Santa has ever seen, no less. Backwards letters, misspelled YOU's, a stream of consciousness vibe, written of his own accord, only occasionally asking me to spell a specific word. The whole five year old package. Sigh. Santa cannot resist that level of Cute.

And because Santa's elves are done making toys for the year, the shop now cleared for the end of the season Eggnog Kegger (yes, in the North Pole there are kegs of eggnog), Santa went out to his (or her) local shopping center to find this invaluable toy. Santa discovered that this Lego line was the hot toy LAST year, therefore it has been replaced on store shelves. This toy is the White Whale. After several stops and one ALMOST FOUND IT! moment, Santa resigned himself (or herself) to the fact that it cannot be found in person. And so he (or she) decided to check Amazon.com, and it was found. Miraculously, there is was. However, it is Thursday the 20th. To ensure its arrival before the big day, one day shipping must be selected. One day shipping on a $10 item is $17.99. 17.99 just for the shipping! Double the cost of the item, solely for shipping.

But the letter, oh, the letter. Santa can't resist that level of cute. And it is such a small, unassuming request. The toy will be here come rain or 200% shipping costs. Sigh.

This is what Santa gets for being smug about finishing his (or her) shopping early this year. 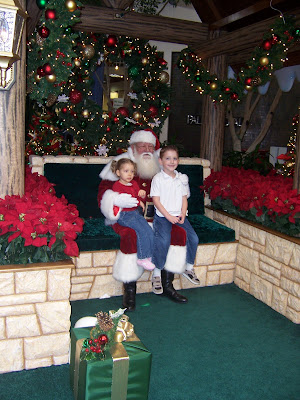 And yes, for everyone who asked, the last three years have been with the same Santa. He's a good Santa, he's even in the Santa's Union. I didn't know they had a union, but they do. That first one of BubTar was taken elsewhere, thus, different Santa.


ETA: Santa continued to make phone calls and found it in a store. Last one. It is being held for Santa's mom to retrieve today. Victory photo will be posted once it is safely in hand. ;)
Posted by Kyla at 8:03 AM

Awwww....what a little heartbreaker. I'm with Santa, that level of cute cannot be denied.

awww that is the cutest thing ever!

That was adorable! I can see how it was impossible to resist!

That is the most perfect Santa I have ever seen.
My Boy pulled that, too, switching gears at the last minute to ask for the pricy Lego Fireboat. Not going to happen, kid. (he'll love the surprise that Santa is bringing him...)

That is pretty darn cute.

For Miss M, it's a Ballerina Barbie. She decided last week that's what she wants and she's been sticking to her guns ever since. She even told the jolly fat man at day care this morning so I guess it's in the bag. ($5.98 at the grocery store. Phew.)

That is the sweetest!! How could Santa resist. Glad to hear Santa could oblige :)

See? This is the whole problem with Santa and his 'voo doo magic.'

He's such a freakin' show off.

But how could you resist the unbearable cuteness of that letter? I couldn't.

Ah ha!!! You have validated my reasons for waiting until the last moment to finish the shopping...

Cakes' favourite gift ever is a $10 plastic piece of crap. Go figure.

The letters with the 'errors' are far more fun, at least they are from my perspective.
Best wishes

This is my calling card or link"Whittereronautism"which takes you straight to my new blog.

I LOVE it!!! And I love that Santa doesn't have to pay that for shipping. Go Santa! Go Santa! Woo!

By the way, I typo'd Santa at first and it came out Satan. Hmm.

I love that Santa letter!

It's AWFULLY cute, as are your kids, and that photo.

Today I saw Patience's letter that she wrote in school.

She asked Santa to send her sister some patience so that she could "SETTLE DOWN just a little."

The teacher and I laughed until we cried.

I probably say settle down to Persistence 8 billion times a day.

i love a good victory.

and to all, a good night.

That Santa is a resourceful fellow...uh, I mean female.

The letter is the best. You must save it to share with his future wife and children. I love it!

Victory is yours!!! That is one awesome letter!

That is so precious. Of course he had to pick something that was hard to find! What a sweet mom you are to search high and low for it. My youngest has her heart set on a Jack-in-the-box, but I'm sorry to say Santa didn't know about it when he made her toys. She'll only be getting one if they have them at Target tomorrow.

SO excited for the update. Shipping that costs double is ridiculous but I can see how you, I mean Santa, could not resist!

I had to do the same thing to get my husband a unfindable CD.

That letter is aces. Happy Holidays!

Perfectly adorable. I'm glad Santa's mom was able to pick it up.

WHew! Santa's Mom went to a lot of trouble for that toy!! I know what you mean about getting it no matter. Sometimes you just have to do what you have to do.......A LETTER LIKE THAT ONE gets put on the cover page of this Year's Christmas Scrapbook !! It's a keeper!

That is the cutest letter ever. Great story, Kyla.

Oh, this sweetness has made my day!

Mine pulled a bit of a surprise, too, suddenly asking Santa for a couple of puppies (stuffed) and a couple of ponies (My Little). They are smallish items, stocking stuffer-ready, and since Santa does stockings at our house, I did run out to accommodate it, too. It's so sweet when their heart's desires are so easily give-able.

And hey, he *could* be named Bubba! You are from the south, right?

That is the cutest letter EVER!

And -- I totally feel your pain. I paid a crazy and unmentionable amount for a Bumblebee Transformer on eBay. Ridiculous, I tell ya. Oh well, it will be worth it when I see his face when he opens it!