Yesterday morning began with a call to my mother to see if she was available to be on call for picking up BubTar in case KayTar's therapy ran long. It did run long, but I didn't realize it in time to call my mother and give her time to get there, so I snatched up KayTar and hightailed it to his school (without getting a ticket!). When I arrived, the pickup line had disappeared and BubTar's teacher was standing in front of the building with two little boys. I waved at the one in the blue jacket, but as I got closer, I realized it wasn't BubTar. It was another child in a similar jacket. BubTar wasn't out there at all.

His teacher walked up to me and looked slightly worried and said, "Oh! I think he accidentally got into the after school care line, let me go get him for you." And she was gone. For a long time. And I sat there, not knowing where my son was. I left the house in such a hurry that I didn't grab my cell from the charger. I couldn't call anyone to see if they had mistakenly picked him up. I suspected my mom had picked him up, but I wasn't sure and as such, terrible anxiety driven scenarios of abduction and lost children, my lost child, tumbled into my mind. I must have been speaking out loud when I said, "Kyla, stop it." because I heard KayTar parrot it back to me. "Kywa 'top it." and then for good measure, "Kywa is mudder (mother)." Her latest factoid. Time continued on, and there we sat, just waiting.

The teacher returned, practically running, and I thought, "Oh God."

But she said, "I panicked when I went back in the school, he wasn't in after school care and I didn't see him leave. I found all the teachers who were at pick up time and Mrs. K (his PreK teacher) said she was the one who put him in the car and he is with grandma."

And that's when I exhaled. I knew that was likely where he was, but until I knew, for sure, I could not relax. I explained to her the small confusion regarding KayTar's therapy appointment and apologized for worrying her so. I drove home quickly, sure they were wondering where in the world we were, coming home to an empty house and all. They had probably tried calling my cell phone, the one I had left at home in the rush.

When KayTar and I rushed in, cartoons were on the TV, BubTar was sitting next to my mom, eating his lunch. No one asked where we were. My mom assumed therapy had run REALLY long and it was out of the house sort. She had no idea we had gone all the way to the school to retrieve him and found him missing. She thought that my phone call meant she needed to pick him up unless I called and said otherwise, I thought the opposite. Miscommunication, misunderstanding. But none of it mattered because my boy was home safe and sound.

"Mom, why are you looking at me like that?"

"No reason, baby. No reason. Just come here and give me a hug."

And then our day went on. 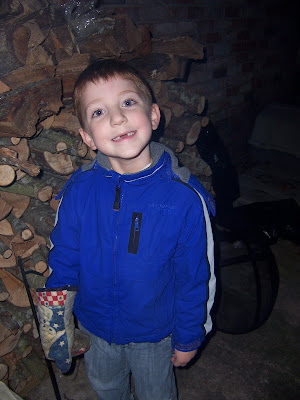 Oh God my heart started racing just reading that! That is my worst nightmare... that I get to daycare and someone else has picked him up! So glad it all worked out.

In the end, then, a very fortunate miscommunication.

But oh my stars...that missing child panic. I know it well.

Last week I went to get Patience from school and nobody could find her ANYWHERE. The two teachers and I were looking slightly crazed and panicked when a kindergarten teacher (not hers) happened by. She said, "She's in Daisies, right? With X and Y? You're X and Y's friend, right? Well they're all at Daisies." I had written NO DAISIES on the wrong week. Holy bejesus. I had to sit down for a minute, and then berated myself the whole walk home LOL.

Glad Bub is well, hope your adrenaline ache is worn off and your heart recovered.

Aaaaah! I burst into tears when I saw his picture at the end. My kids being lost, me not knowing where they are - my worst nightmare. I'm so GLAD he's okay.

(Oh, and thanks for letting me know about the tag. I am SO spacy these days.)

that must have been a horrible few minutes, sister. that panic. oy.

How scary! So glad it worked out for the best.

I was totally panicked at the begining of this.

Seriously, ready to get in my car and comb neighborhoods.

Slouchy had a moment like this a few weeks back. It's so unsettling to think we might ever be separated, really separated, from our kids.

Oh. Oh. I hate that feeling. That burning and instant sweat of panic.

I lost my daughter at a Children's Museum once. I stayed extremely calm, until realized I needed to walk out the front door and ask the people if they saw someone leave with a small, blonde, beautiful, precious, probably scared...by this time I was sobbing uncontrolably and no one could understand what I was saying. They locked down the museum and we located her under the computer desk in the room we had been playing in. Evidentally, we were playing hide and seek, and I was unaware.

I would have had a heart attack on the spot, quickly followed by a panic attack and hives. How you drove without getting a ticket is beyond me. Your outer calm is amazing.

Oh, what a fright. Glad it had a happy ending!

How frightening. Thank goodness it was just a miscomunication with your mom. Whew.

That is the worst feeling in the world Kyla. I'm glad all is well now, and believe me, I've had that moment a few too many times too . . .

My heart started racing as well as I read this... I know the feeling. I'm glad it all worked out in the end...


And I just went through your last 20 posts or so on my reader (catching up). I'm so terribly sorry to hear about your friend's diagnosis and your friend's boy. There are no words sometimes.

I would have been am incoherent, sobbing mess.

how could you NOT look at him that way?

i had a similar experience with ben this summer. it stops your heart, it really does.

I lost Matthew in Walmart one time and almost had a complete meltdown. I'm not sure how long he was missing even but it felt like forever! All these scary thoughts started popping into my head and I just couldn't keep them out and reason through it. It's a scary world we live in. I'm so glad Bubtar is safe and sound. I would have been just as panicked Kyla.

Moments like that are just terrifying. If something like that is going to happen, at least BubTar had no idea because it can be very traumatic for the kiddos as well. So glad everything turned out just fine.

This would have put me into hysterics, but you kept yourself together somehow! I vividly remember slouching's post about a similar incident, both posts make my heart race just reading them.

And those Santa pictures above are precious!

those almost moments. oh. heartstopping. like when I lost MQ in a store. I was crying when they found her - on the far side of the big department store. She couldn't figure out what the big deal was.