Nope, not this one. 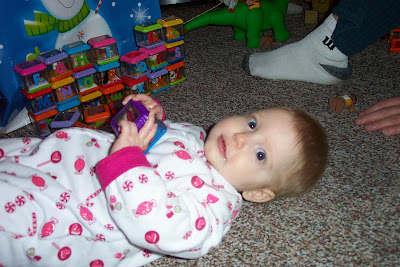 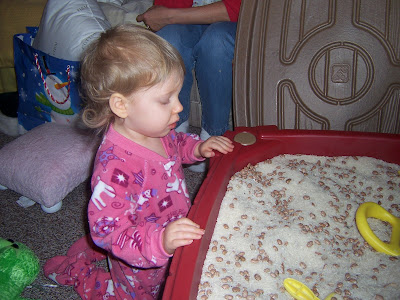 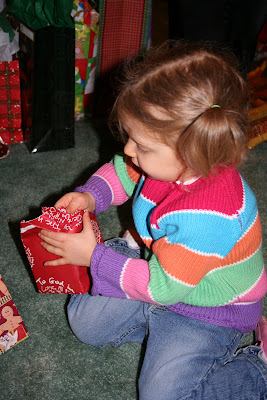 The very first Christmas she realized anything out of the ordinary was happening around her.

The first Christmas she could walk. 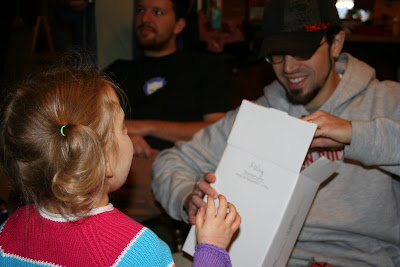 The first Christmas she noticed that there was a spread of new play things in the living room.

The first Christmas she could stand up.

The first Christmas she woke up with the family. Last year we were afraid that waking her would trigger an episode. This year we know that nothing is going to trigger it unless it was going to happen in any case. Even at 5 am. (BubTar was up at 3 am, but my dad talked him in to resting a bit longer)

The first Christmas she said "Fank you." after opening each gift. 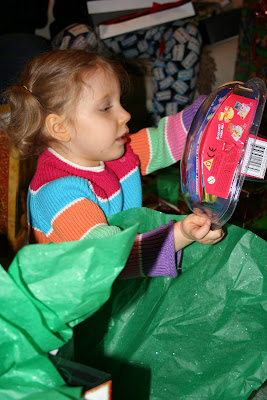 The first Christmas my sleepyhead was awakened with only the whisper of, "Do you want to open those presents now, KayTar?" From way back in her mostly sleeping brain she answered "Yes." and began to wiggle into consciousness. We had to turn every light out for a while, because it was just too bright for her, but eventually she adjusted.

The first Christmas she was excited about having company and about going to visit others.

The first Christmas we heard her sing Christmas songs.

It was our first Christmas that we enjoyed entirely as a family, and were able to see the joy of it all reflected in both our children's eyes. It was glorious. 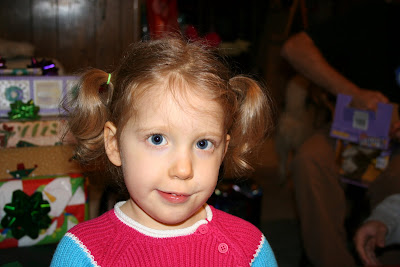 fank you very much, in fact. it's something isn't it...seeing how it becomes all about them discovering joy.

The precious "fank you". How wonderful for the entire family! SHe is just beautiful.

that is about the merriest thing I've read all week!

Hurray for all those "firsts!" Look how far she's come!

So, so sweet. This is truly a Christmas you will always remember.

Kyla, how movingly beautiful! Such a wonderful bunch of amazing firsts. So much joy for all of you. I could not be more glad. :)

And let's ask Flavia when she'll host the next martini party. :)

Oh, that GIRL! The Baby had a festive time too, although she was in a foul, foul mood for both days. That sudden dawning awareness of what it means is MAGICAL, isn't it?

Oh, Kyla! How miraculous, for all of you. My heart is all warm and fuzzy after reading this post, and seeing those lovely, lovely pictures.

Our little Kaytar...she sure has come many miles this year hasn't she? I am so glad it was so magical for all of you.

That is so awesome...I can't believe how much she has changed in a year...and wow, passing out presents!!! The only way I could even get close was by putting just the first letter of each boys' name...then E would know. She's such a star!

I get this. I so get this. What a great Christmas this first real one is.

That sounds so wonderful!!

she's come so far so fast, hasn't she? incredible.

Sounds (and looks) like it was a magical Christmas. I'm so glad.

fank you, she is magic.

What a beautifully written post - it made me heart swell for you and your little girl. Glad you had such a great time.

How wonderful for you ... and her. I'm all misty eyed for I completely understand what this means to you.

I was still waiting for Bug's first Christmas. It never came. But I'm so glad your daughter's did.

I don't even have the words.

Here's to many, many more wonderful Christmases!

How wonderful to have come so far. Merry Christmas.

Aw. It is somehow so much more special when they start to really get it, isn't it? Pumpkinpie's Christmas this year was so much more fun to plan and watch because I knew she would start to anticipate more and understand more and participate in the magic of it. So wonderful.