Me: How about we watch Oswald?

Me: What color are your shoes?

Me: Where does it go?

Me: Where is Bubba?

KayTar: In ere. *pointing* Ind him!

Me: Who is this? *pointing to KayTar*

KayTar: Weeeell? Wha a do? (Well, whatcha gonna do?) She shrugs her shoulders for this one.

There is definite progress being made on the question and answers front. She is practicing a lot, but I think she is really starting to grasp it. I think she understands a question needs an answer instead of an echo. Her answers are typically one size fits all, but it is progress and she is learning more and more proper responses all the time.

Her developmental therapist was in awe this week of the progress she has made since she saw her last Tuesday. She's saying multisyllabic words, she's answering questions, she is speaking in sentences (some of the time). I scarcely had to translate any of her words for the therapist. Her speech therapist is going to be through the roof the next time we see her. It is just so unbelievable. Hell, its miraculous. 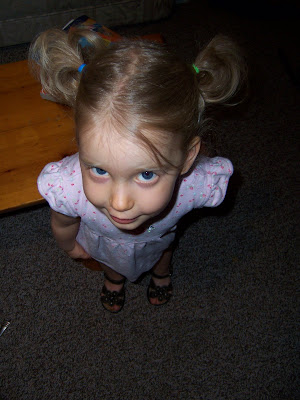 Hooray KayTar! I am so excited for you, Kyla.

I love it, Kyla. She is so awesome. This rapid progress is unbelievable. I can't wait to hear more.

So wonderful and exciting.

Good work, little one. We're all so proud.

Way to go Kaytar! I just have to say that I love that picture. A keeper for sure.

b. see, you knew it instinctively immediately. they tried to silence you and they were wrong. wrong, wrong, wrong.

KayTar, we are so proud of you. We're strangers and we'll probably never meet, but, sweet girl, you are so very important to us and your progress is celebrated.

Love,
Strangers in the blogosphere

Its amazing what one little bit of gadgetry can do to someones quality of life... Your post sounds so joyous and happy, and I am happy for you because of that.

That is the cutest picture... and way to go Kaytar! She's amazing!

Hooray!!! That is great news. She sounds just precious too!

She *is* miraculous. (And freaking adorable.)

And I love the toddler talk.

Oh how cute is the pony tail photo! She is just talking away!

Such an exciting time for your family and especially for KayTar. I couldn't be happier for you!