We're home, safe and sound. Vacation was nice. More on that in a later post.

KayTar had an episode, event, seizure, migraine, whatever you want to call it tonight. I'm really tired and can't really put a cohesive post together on it right now. Monday night, the night before we left for our little getaway, I had a dream about KayTar having seizures. We were some place new, we couldn't get in touch with her doctors and I couldn't get her to the hospital for some reason. The whole dream was me trying to get her to the hospital. I woke up panicked. It was one of those dreams that sticks with you, and every time I looked at KayTar, I saw her as she was in my dream. This evening, I couldn't help but note the timing of the dream. Thankfully we were in town when it happened, I don't know what we'd have done if we were still away. The last time KayTar had something like this, it was also on the day of arriving in from out of town. I don't know if that is a true connection or just a coincidence, but it is a fact nonetheless.

KayTar is fine now. It lasted about 2.5 hours, then she slept a bit. There are many more details, but I'm not up to typing them out. Once she woke, she was herself again.

I'm sure I'll have more to say tomorrow after speaking with the doctor, but tonight I'm too tired to say anything more. Hopefully I'll have time to stop by your blogs in the next few days, I've got 140 new posts in Bloglines and it will only grow in the morning. 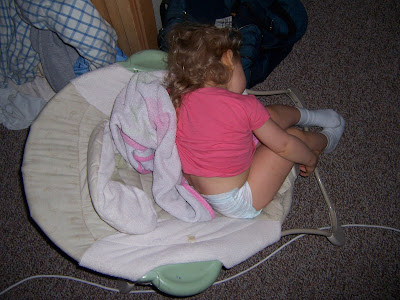 hope everything will turn out good.
Ciao from Rome
freddie

Welcome back. It's funny but just when I read your last post (I was late, it was probably only yesterday or Wednesday), it occurred to me that it had been a long time since you mentioned an episode. But then I thought maybe I'd missed it during the times when I couldn't keep up with my bloglines (although I don't think I ever got up to 140 -- I think 100 was about my limit).

For some reason Ben's have become more "powerful." I'm wondering if the heat/humidity has something to do with them? It sucks grasping for straws.

Oh, I'm sorry. I hope she is feeling OK today?

(I am glad it happened at home, though, if it had to happen.)

(HUGS) I am so sorry about the episode. I'm so glad you were home though,and even gladder you had a nice vacation first, but most glad that she is OKAY NOW.

I put up something funny for you on my blog today...maybe somehow things work out as they should. Maybe you need a laugh today. I hope I give it to you.

Poor thing. Rest up and don't worry about bloglines. You come first.

Poor little sweet. Give her a hug from me... em xx

Look at her, so vulnerable and little in her chair. I'm so sorry she had another episode, but having so long between them must be a good thing?

Oh, Kyla, she looks so exhausted in that shot. I want to just gather the both of you up and let you rest and do whatever needs to be done. If only we knew what that was.

Welcome back. Take your time, find your feet. No one's going anywhere...

Sending you lots of hugs and luvin.