BubTar has been quite the trip lately. He is growing like a weed, suddenly all knees and elbows and legs. I blinked and he sprouted. When I hold him, his feet dangle right below my knees. 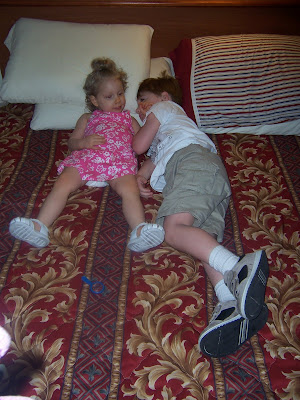 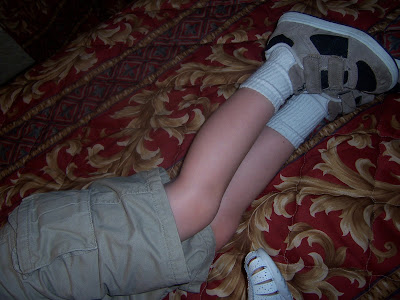 This week he asked to help me with laundry and folded the hand towels on his own, not a huge deal, but his only prior chore experience is cleaning his room. It was nice working side by side with him, and he was so proud of his finished product. 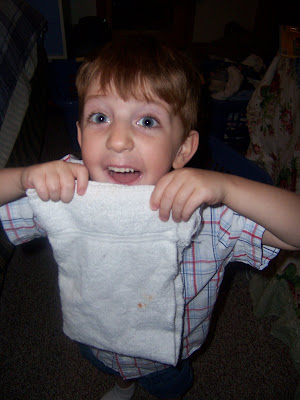 We have started reading chapter books together, The Magic Treehouse series. We've been reading one chapter per night, but last night he suckered Josh and I both into reading a chapter each and he said it was "The best day ever!". Last night I picked up the next book, because we are almost at the end of the first and this morning he begged me into finishing the old one so we can start the new one tonight. The books aren't terribly exciting for me, but I love that they are opening a bigger world of literacy for him. Dr. Suess doesn't quite provide the sort of excitement a school aged lad enjoys. And I love the cuddles. :)

Wednesday we went swimming at my parents' house. They had an inflatable chair that is meant for dry land, but I tossed it in the pool and attempted to sit in it. It flipped me over mighty fast. BubTar laughed and exclaimed, "You could be on America's Funniest Home Videos, Mom!" He cracks me up.

Yesterday we attended a birthday party, and he was so shy. He is an extremely outgoing kid, friendly and social, but in large gatherings he becomes a wallflower. Actually he becomes attached to me, usually with his head buried in my chest. He won't eat or talk. He won't play or laugh. There are two times I see myself in him, as clearly as looking in a mirror; when he is being incredibly shy, and when he is miserable because we dragged him along somewhere. The hiding, the sulking, the begging to go home...all me. 100%. The stubborn resolve to make sure he doesn't allow himself to have any fun? Me, again. Once the party portion was over and he and I went out on our own, we had a blast. He was himself again. It is such a strange facet of his personality. He is such a social butterfly at home and at school, he has lots of friends, but certain situations just feel awkward for him I guess, even when he is surrounded by his same classmates from school. 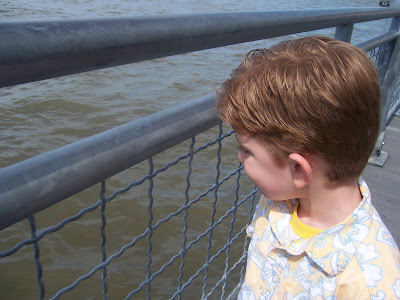 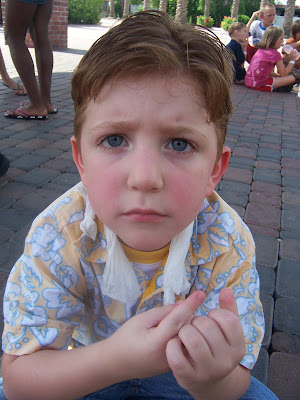 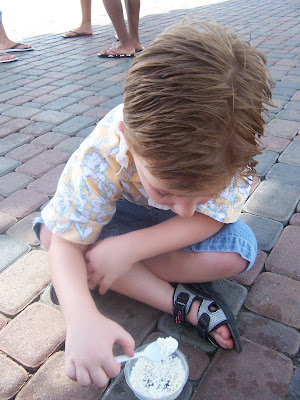 I'm just touring around checking out all the fantastic BlogHer gals this year! And I can relate to this post..my outgong 3-year-old was shy. OK, maybe only once. Today, we crashed a 1st grade playground party and saw she'd weaseled her way into all their activities. Wallflower she ain't.

Baby brother on the hand? I'm still trying to get him to cut the umbilical cord. :-) So fun to see their different personalities emerge!

His eyes are beautiful.

I loved it when my parents read to me when I was a kid - especially the chapter books (Narnia & Famous Five were my favorites). I can't wait to do it with Bumper.

And that shyness, oh I know that too well. I remember how I felt when I was younger, how scared I would be and now I see it in Bumper. She warms up faster than I ever did but it's still there.

BubTar is such a handsome guy :)

Yes! I'm so proud of you training that boy to fold laundry!! I can get my boys to do the sock basket, but that is about it. Thanks for sharing all the special things about your son.

What a great post, Kyla. There is so much joy for you in watching him grow up, bit by little bit.

BubTar's pictures are always so expressive. I especially love the one of him folding towels. Tell him to come to my house anytime...I currently have a huge basket to fold!

I like that pic of him pointing ever so slightly to the group of kids behind him. That's funny that he gets that from you. Are you going to pout and point at BlogHer? :)

My daughter loves Magic Tree house! We are flying through them these days.

I recognize those last pictures!

Patience and Persistence are garrulous at home, sometimes even gregarious.

But in public? In a crowd? Do not look or speak directly to them.

No really, they are the same way. I'm not sure how much of it in P2 is cueing from her older sister, though. P1 is notorious for this. She is so sensitive to all the senses. And then people are out of context. I think she has a sort of boxy mind and it takes her a bit to process.

Isn't it somehing when they get all limby and gangly?

such a face...it's amazing, isn't it. how they grow. mind and body both.

He's a beautiful boy. My Boy has stretched way the heck out recently, too - all tall and lanky and boylike.

Oh, Mme L did this very thing today at an open house we went to. It made me sad, not that she was shy - that I can understand - but that I know that she would regret not playing with the kids at the end of the day, when it was all over.