Well, the first two days of fully functional ears were a bit bumpy. Initially, as I told you all, the ear molds aren't quite right and it causes a painful squeal. Since then I've learned to get them in a little more securely and it has cut down on much of the squealing. I'm actually leaving the aid on full time now, and it seems to be functioning well 95% of the time. The other 5% of the time it is squealing. Then Tuesday morning, I used my fancy hearing aid stethoscope to listen to the aid (just for practice) and I heard absolutely nothing. PANIC! Then I turned the volume up and I could hear again. Sounds logical, right? Nope! The hearing aid was programmed to override the volume switch to prevent a 2 year old from accidentally turning it up too loudly or down to softly. For some reason the program didn't take. I think the volume was up really high on the first day, which might have added to the squealing. It wasn't supposed to matter so we didn't check it at all. So, we are returning to the audiologist in two weeks for new molds and a reprogramming. Then in two more weeks, she has her next ABR.

Other than the minor problems, it has been wonderful. She loves her new "eah". After she wakes up, I show it to her and she eagerly demands "In! In! In!". I've noticed a difference already, although Josh says it is wishful thinking. I think not. She is definitely more responsive to music, and she is mimicking lots of new words and sounds. Her "doc" has evolved into "doc-dor". Her "ingle" for triangle has evolved into "ang-ang-gle." Her "ween" for swinging has evolved into "winging". Her "geeeeen" for again has evolved into "ageen". Those are just a few examples. Last night at feeding therapy, I think she repeated everything the therapist said, and I did very little translating for her. I really do think this is going to be amazing for her once we get the kinks worked out.

Speaking of feeding therapy, last night we made a decision to switch from feeding-centric therapy to overall sensory therapy occupational therapy. I am pleased with this, because I didn't feel that the OT through the state was cutting it for her. She has such a varied sensory processing problem, that I think they were limited in how they could help her. The therapist did a fine motor evaluation last night and KayTar scored an average of 28 months, and she is 27 months! She's never scored above age level on any evaluation, even by a measly month. Fine motor is her forte, so it isn't too terribly shocking, but wow, is it ever nice to hear. The therapist said in certain sections she is at a 3 year old level. Wow! She is ready to start working with scissors now. Also, she suggested we start practicing design mimicking, building things with blocks and asking KayTar to replicate it with her own. I'm excited to get her into private OT, I think it will do worlds of good for her.

On other fronts, I've had to make BubTar a summer schedule for days we are at home because he is more than happy to lie around watching television all day and we just can't have that. Today is day one of the new schedule and so far so good! It is so difficult to stay busy here in the summer because it is just too hot for outdoor time unless we are in the water. Miserable.

Yesterday he had a well-child check up and he had to get two shots. It was going to only be one because the office had been waiting on Varivax boosters for over a month, but after the pediatrician left the exam room, she came back in exclaiming, "They're here! He can get one today!" BubTar wasn't nearly as excited. He actually hid under the exam table and I had to drag him out when the nurse came in with the shots. We held him down and he screamed like she was killing him as she wiped the injection site. She said, "Wow, that must be one painful cotton ball!" Once she actually stuck him, the noise level went down considerably. We decided that cotton balls are much more painful than needles. Afterwards, I said, "You did great, buddy!" and he said, while sobbing, "I did NOT do great! I was a CRY BABY!" and continued to cry. It was so hilarious, we both started to laugh. Other than the shots, the appointment went well. He is developing perfectly. When asked to write his name, he wrote it backwards. He never writes backwards...but I think he was trying to show off for the pretty doctor. *lol*

I think that is a fair amount of updating, so I'll leave it at that.

I gave BubTar a list of her words, since he is actually learning to read and he didn't know a few of them! Every day wee seem to find more words she knows. It is quite the trip!

Also, we have been doing a lot of this.

Yeah, it sounds like BubTar says "Shit!" but I assure you he didn't. I cannot for the life of me figure out what he did say, though. Any guesses? Oh and sorry for the annoying "Round-round" part. KayTar demands I say it with her. And feel free to ignore the various chit-chatting, too. 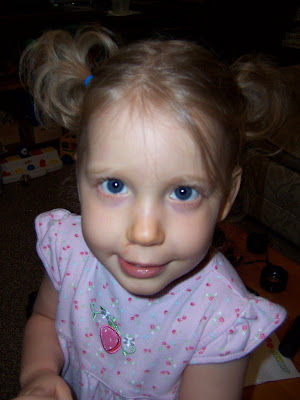 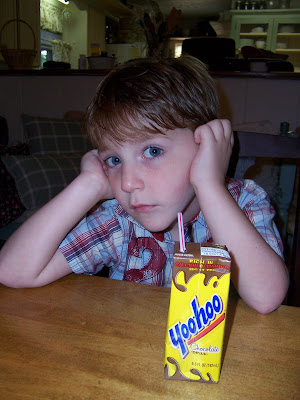 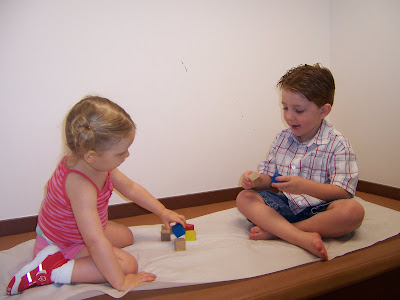 What a fun game!

They are both doing so well. KayTar's progress is really quite amazing!

I think private therapy is the best ever-fewer limitations, fantastic news! Whoo hoo for the higher eval scores too, that's something to be celebrated! oh, and quit teaching your son dirty words ;)

Way to go Katie!! She is doing so awesome Kyla. I can't wait till we see her again.

And that was hilarious about Nathan saying he was a crybaby. I would have been laughing so hard too!

You can tell Katie loves the pool. You are right, that is the only thing we can do now outside. The heat is so miserable and it is only getting worse! YUCK!

Can you imagine how much KayTar is going to love her new ears when they start working perfectly? 2 weeks can't get here soon enough!

Her reading is just amazing. She's such a smarty-pants and she's absolutely adorable in ponytails!

BubTar is cracking me up with his "crybaby" comment. He is super handsome posing with that Yahoo!

What cute kids - I love the crybaby story.
Kaytar is such a smarty!

Okay, when I hear and see stuff like this I think you're making up the part about her having "delays". :) She speaks soooo well. More than I pictured her talking. Kyla, that is awesome how well she's doing. And she's ready to start using scissors?!?! What a super star!

Bub's CryBaby story is a hoot. What a funny guy. I want Easton to be like him. I have no idea what he said...does he know?

Your kids are so cool and smart! Love 'em!

gorgeous. and sister, you know, it's ok if he did say shit. funnier, even.

i don't think it's wistful thinking. i think you are right.

Wow...pigtails. I YEARN for pigtails. Kyla, they are gorgeous, amazing children. You're doing a great job.

I believe you about the improvement. Once we got Persistence's ears cleared her progress was leaps and bounds.

And amen about summer programs. I had my summer mapped out by May LOL. Today is the last day of summer enrichment, which is fine for Patience who has other activities but stinks for Persistence, who at not 3 yet, has NOTHING else to do.

Except drive us both crazee.

Yesterday? I was just trying to be two steps behind her...taking care of one disaster while she made another two. She STUFFED THE FLAPPIN' TOILET again, and this time with PLASTIC BOTTLES from the play kitchen. ARGH!!!

I love the last photo and the videos are so fun.

I love how you refer to the hearing aid NOT working as a minor problem. I know, I know, it is working to a certain degree but, I swear girl, you have so much more patience than I do.