We flew to the North Pole!

This past Saturday, KayTar and I were invited to do something REALLY cool! We got to participate in United Airlines Fantasy Flight to the North Pole! The Fantasy Flight is mostly for muscular dystrophy kids, but since mito falls under that larger umbrella, our mito clinic had a handful of slots for their patients and we were chosen to go. The boys were busy with scout stuff that day and the invitation was for one patient and two accompanying adults, so I invited our friend/KayTar's school nurse to join us. It was wonderful! 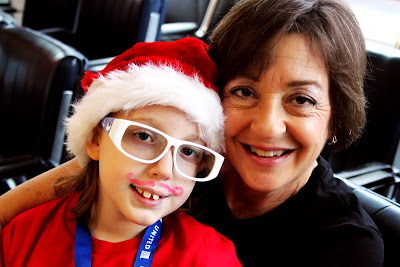 I didn't tell KayTar in advance for two reasons; first, I didn't want her to get sick and us have to cancel and make her the saddest kid on the planet, and second, I didn't think she could make it through the rest of the week of school and concentrate AT ALL if she knew we were going to the North Pole! Friday night, I told her that we were doing something the next day with Mrs. H, but I wouldn't tell her what. She tried guessing and started with things like the movies or the museum, but I told her she wasn't guessing big enough...so she guessed London, the Eiffel Tower, and THE NORTH POLE! I was sure the jig was up at that point, because I didn't deny it, I just said, "I can't tell you!" and she moved on. 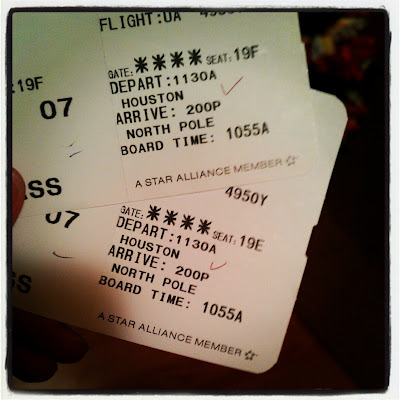 On the drive in, she made more guesses and asked us to tell her, but we didn't. Though BOTH of us made oopsies when talking to each other...she said something about "airpo--" before catching herself and I said something about "fly--" before stopping myself. KayTar just kept up her guessing the backseat, none the wiser. As we got closer, we told her to look for clues as there were big airplanes flying overhead and signs about the airport, but she didn't notice any of that. She started guessing, "The Parking Spot??" "$3.99 breakfast?" "Ramada Inn?" "Park N' Fly?" When she got to that one, I said, "No, but there is a clue on that sign!" She still didn't get it. Even when we passed the big airport sign, it didn't quite click. She said, "What are we going to do at the airport?" Hmm, what do people usually do at the airport, kiddo?! It was all very innocent and entertaining. 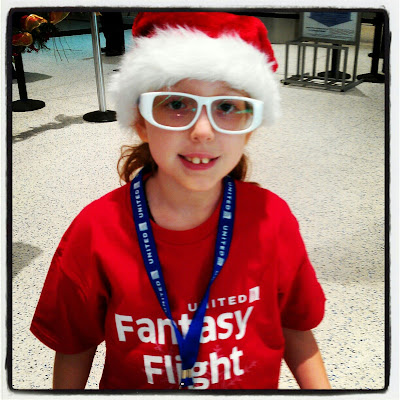 When we parked, we ran into our friends the P's, and her boys had been before and were just dying to tell KayTar where we were headed and so I gave them permission. She was STOKED! When we got inside, they routed us over to get our tickets (which said North Pole as the destination) and KayTar got a t-shirt and Santa hat. Our tickets were not all together, unfortunately, so I asked if they could fix it and they did it right away so the three of us could sit together on the flight. After getting our tickets and going through security (easiest security check in a looong time!), we rode on a tram (while KayTar princess waved to people from the front seat) over to a waiting area where they had snacks and drinks for everyone. The kids played while we waited and some of the airport security dogs came to visit. There was face painting, too, and KayTar got a hot pink mustache. Soon enough it was time to go, so we headed to our gate...which really said North Pole! 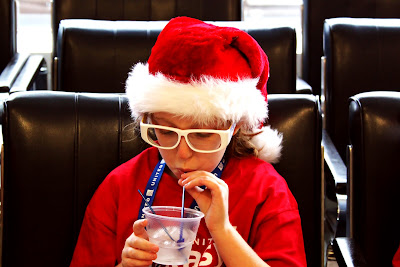 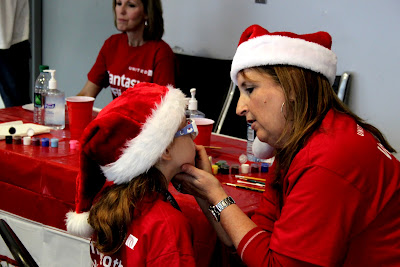 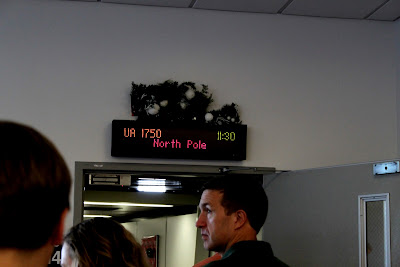 As we boarded, they gave the kids a little bag with snacks in it and once we were on they were each able to meet the pilot and take a turn in the cockpit! The flight attendants were all dressed up and sang carols and were so friendly with the kiddos. On the way to the cockpit, KayTar sweet-talked a male flight attendant out of his blinky light necklace with her go-to phrase, "I wish I could have one of those..." It is unbelievable how often that works for her! When it was time to take off, KayTar clapped and woohoo-ed and flapped her arms like a bird. She LOVED it! (We basically flew in a circle around the city for an hour before landing back at the airport/North Pole.) 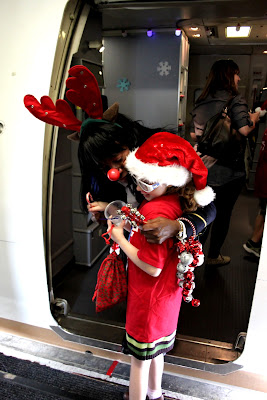 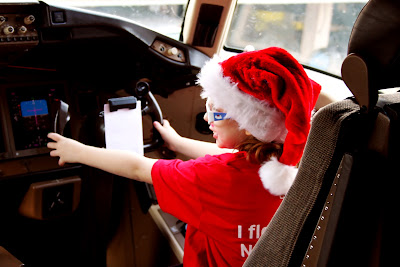 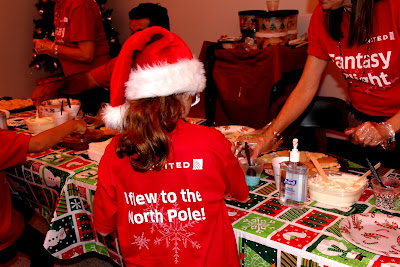 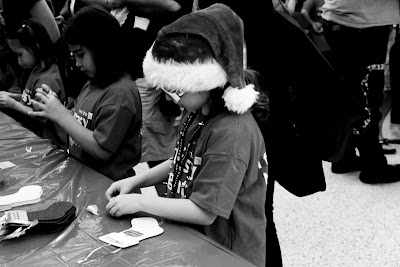 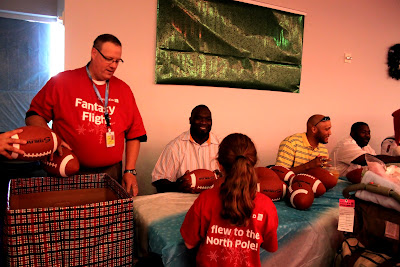 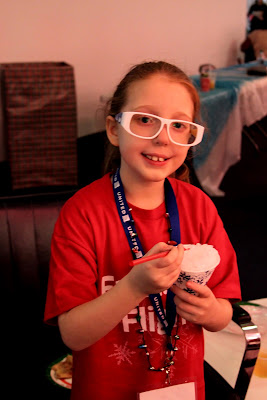 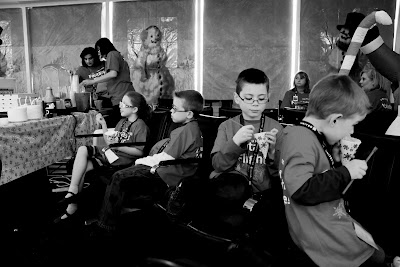 When we landed and deplaned, all of the volunteers were lined up at the gate and they cheered for all of us. KayTar ate it up, of course. She would be thrilled if someone just followed her around and clapped for her all day long! She was smart enough to know where we were, but it didn't matter...it was still super exciting. She got a snowcone, plain, about which one of her friends said indignantly, "You got ICE flavored ICE?" Then she decorated a cookie before we went to see Santa. The picture they took was very cute and they printed it and put it in an adorable frame for us to take home. She also got to pick out a couple of toys, a little castle and a Barbie. After Santa, she made an ornament, we had some NFL players sign a football for her, then we got pizza and another plain snowcone. She had a lot of fun all day hanging out with her buddies the P's! On our way out, they gave KayTar a 16 GB iPod Nano! She was amazed! They gave her a yellow one, which she was totally cool with, but we ran into the P's again on the way out and one of her boys had gotten a pink...so a trade was arranged and everyone was even happier, if that is possible! 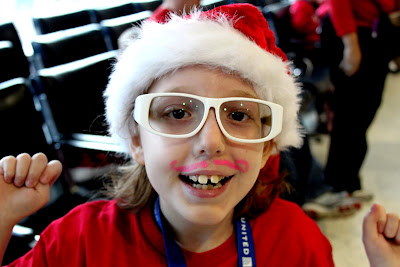 It was a really, really fantastic day...one that I know we will always remember. There was so much thought and effort and money poured into making this a really marvelous day for these kiddos. Thanks, United Airlines and all of the awesome volunteers that helped make it such a memorable day. KayTar can't wait to go back next year (hopefully)! 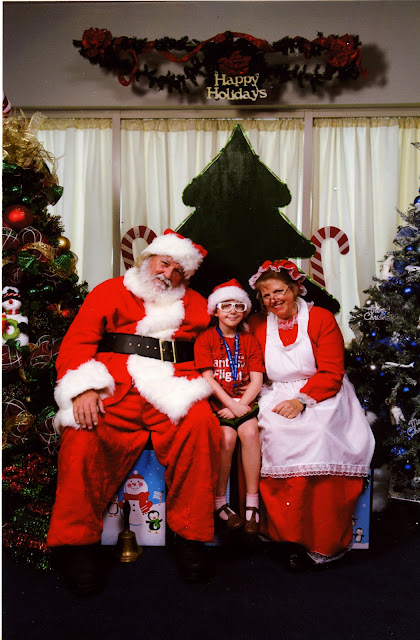 Oh my- this post made me SO happy. How magical for K. Glad she was healthy enough to go. Oh, and ice flavored ice- LOL!

That is so cool!!!! What an awesome experience.

This is such an awesome experience for kids! I love the "ice flavored ice," haha - United did such a great job at creating a magical experience for the kids. What a great day!

Wow! What a neat opportunity! So glad you guys got to go!

that is a fabulous thing.