I'm so terrible at this blogging thing these days. I remember when I used to write almost daily, just because...now even when I have something to say, it takes me forever to find the time to sit down and do it! Of course, I used to have a lot of readers so I felt more of an outside compulsion to keep up. Now it is mostly for me and it turns out that ME is a little lazy at times! ;) Time to play catch-up once again! 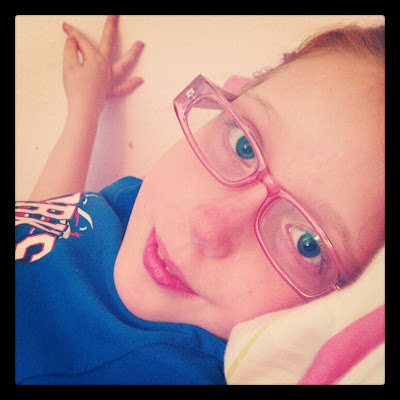 On October 18th, KayTar had her GI check-up. She was 49 inches tall and 50 pounds...if I remember correctly. I do know that she is getting taller SO quickly these days. The doctor was very pleased with her growth and the continued success of the Augmentin for her motility and said we can just keep things as-is until her next check-up...then we might consider upping her daily calories. The Augmentin is working really well on a daily basis and has perhaps made the biggest difference in her stooling habits (keeps things loose and we have soooo many fewer accidents now)...but it is not enough when she gets sick or is recovering. It took us nearly an entire month to work back to normal feed rates after her crash at Mito Camp. But yay! She's back to normal feeds now! She's also fighting with a new bug, so we'll see how long it lasts. I think we may eventually need to move on to something else to help her motility, but I'm at least satisfied with the way it has helped her intestinal motility, even if her tummy still gets very sluggish when sick. 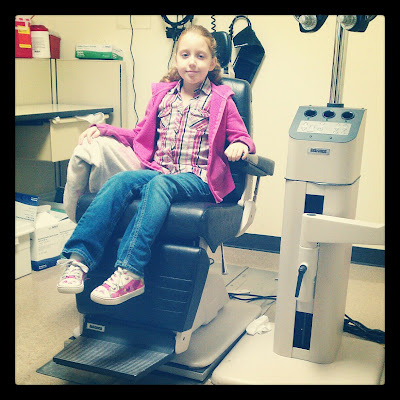 She had her ophthalmology check-up on October 30th. I was SO impressed by her in that appointment. For all of these years, when he would ask if she was having any trouble, I had to give my best guess based on my observations, but this time when he asked, she replied, "Well, the numbers on the calendar at school just look like blurry dots from my desk." It was such a little moment, but she seemed so grown up in it! Then they told her they had to dilate her eyes and she lost her mind and had to be restrained while she screamed...so that tempered it a little. ;) She actually said, "Don't do this to me, it is worse than the Cruciatus Curse!" Oh, drama and wizardry! The doctor said he myopia is rapidly progressing and her prescription went from a -3.25 R and -2.50 L to a -4.25 R and -3.75 L...no wonder she couldn't see the numbers! He also recommended bifocals. We got her new glasses in next week and I think they are gigantic and resemble space goggles even though I ordered the smallest bifocal frames, but she loves them and is so excited to be able to SEE clearly! 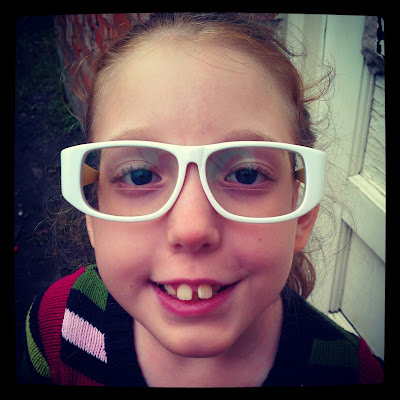 Such a big girl- oh it must be so nice for the patient to be able to articulate what's going on- I'm jealous- ha! I LOVE her new glasses- spunky just like she is! I hope she is well this week and we can see you guys on Saturday!

I still read! I always love it when your post pops up in my reader. Glad her new glasses are helping her see better.

I always love your pictures!

Glad KayTar's GI appointment went well. Sorry to hear that her glasses prescription had to change so dramatically, but her new glasses are cute! It's good that she can see things from her desk now!

Her new glasses are stylin' and she looks adorable in them!

I love her cruciatus curse comment - at least she didn't bite anyone (Nolan did at his last eye appointment - yikes)!

I am bad about blogging lately, too. Sometimes I just don't have the energy for it. Other times I'm just lazy. Ha!

I hope KayTar's motility stays stable since she's getting sick again. Can germ season be over already? Blah.

I'm still reading here, too! I'm always interested in your updates. It's so great that KayTar is growing so well!

She look super cute in her new glasses.

I love her new glasses - she's such a cutie!!