Gastroparesis, ketosis, and an abscess...oh my!

It has been a rough few days! We are currently fighting against a return trip (we were already in the ER on Saturday) to the hospital because KayTar still isn't doing well.

It all started Thursday afternoon when KayTar made me stop her feed and she promptly vomited it ALL up while I was rushing to get her venting equipment. We did clears that evening and slow formula on Friday morning. We managed to get her to school for part of the day and part of her party before going to get her already scheduled flu shot (maybe we should have skipped this!). Friday she got about 16 ounces of Elecare plus 8 ounces of Powerade over night for a total of 24 ounces, rather than her normal 32 ounces in a day. Normally a deficit like that isn't a big deal, but when we checked her urine on Saturday, she was already spilling a large amount of ketones. Not good! It has been years since she has decompensated like that and I was quite worried we would end up in the hospital on Christmas if we didn't get her buffed up, so I called the on call neuro and he agreed we should bring her in to get fluids. 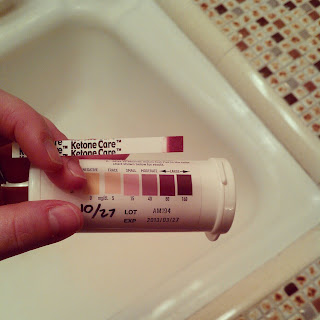 This was our first time in the ER with our protocol letter and we were taken back quickly! The rest of it was sloooow once we were back and hooked up, though. KayTar was not thrilled with any of it, except for the Angry Birds toy she got for a reward for the IV and the teddy bear we got at registration. I was a teeny bit frustrated that they forgot to order half of her urgent labs until hours after she had been on D10 and fluids, so they were all normal by then...who knows how they were when we got there! We were discharged around midnight and headed home. It was a long afternoon/night. (And I was forced to watch Santa Paws. Good Lord.) 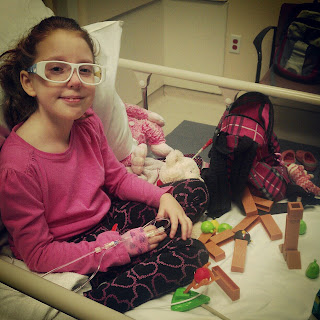 Sunday morning, I noticed that KayTar was wincing when I gave her meds and plugged in her feed, which is totally weird. I consulted the collective wisdom of my tubie parent friends and Heather suggested that it may be an abscess and to feel around for a lump or ridge. Bingo! There it was...right where it hurt worst. I took a photo at the pediatrician's request and she decided to treat her with oral and topical antibiotics. We started them midday yesterday. I don't know if the brewing abscess caused the earlier vomiting, feed intolerance, and decompensation, but we are hoping that treating it will help. Unfortunately, last night she was spilling ketones again!! And when I tried to vent her, I pulled out a lot of old formula. It is like nothing is moving through. We can run feeds for a time and it is fine until it hits maximum capacity and then we can't get anything more in. Ugh! We hooked her up to her pump last night to try and get 16 ounces of Powerade in over 12 hours, but she unplugged herself in the night (and now there is red Powerade everywhere!!) and I don't know how much she really got. Grrr.

This morning her glucose was low-ish (62) and she was spilling ketones still. We are trying to alternate 4 ounces of Powerade (dye-free!! I learned my lesson!) and 2 ounces of formula at a rate of 60ml/hr (2 ounces an hour for those of you that don't speak this language). At last check, she was still spilling ketones, but her glucose was at 80. She has diarrhea now, though. She is also getting congested. I am at a loss as to what exactly is going on and we are struggling to avoid a bounce-back to the ER. I don't think they will let her go unless she starts tolerating normal feeds if we have to go back. This is the first time we've dealt with both a gastroparesis flare AND metabolic problems and they are both working hard against us. So if you are the praying type, please pray that we can get this under control and avoid another hospital trip. KayTar would be heartbroken to miss Christmas at home! 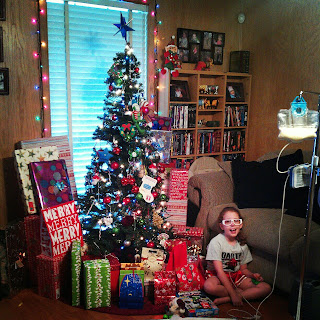 praying she starts feeling better so you all can enjoy christmas at home.

What a wild ride! I'm glad you found the abscess so it can be treated, and I hope her sugars are nice and stable from here on out. I also hope that her tummy starts moving along again!

I actually hid our DVD of the Santa Paws movie. Does that make me a bad mom?

I hope things got better and that you were all able to enjoy Christmas at home. Praying that she's back to baseline quickly!