Wednesday night: I noticed that the closure nub (seriously, there has to be a better name for it, but I can't think of one!) on KayTar's g-button was breaking. Except, I noticed it in the middle of the night and by morning, I thought it was a dream! 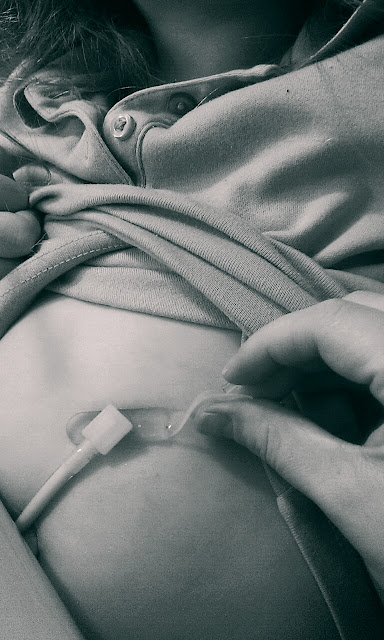 Thursday: After school, I remembered the dream, so I checked her button to reassure myself...except that didn't go to plan! It was breaking and almost completely broken off by then. Oops. I called the surgery clinic and left a message that her button was breaking and it wasn't urgent yet, but maybe they could get us on the schedule for Monday?? It felt a little too hopeful to me, but I REALLY did not want her to miss another performance. I bandaged her button up, so it wouldn't get tugged on during costume changes and off we went to the musical! I was the backstage parent that night so Josh would watch the play with his family, but evidently it was a PACKED house and the applause went on FOREVER! We could hear it from where we were! So cool.
Thursday night: When it was time to hook KayTar up for her last feed, I called Josh upstairs to show him what condition the button was in, except when I opened the button the closure nub was GONE. It had broken off and was lodged inside. Ack. Josh used the venting tube to push the nub through, then we fed her, then we hooked an extension to her tube, clamped it off, and secured it to her belly to keep stomach contents from leaking out. Normally it doesn't matter if the nub is broken, the internal anti-reflux valve should keep stomach contents in, but her valve has been blown since she got this button which complicated things a bit. I secured the tubing to her with hypoallergenic paper tape, BIG MISTAKE! I think that was the worst part of this whole ordeal. She broke out in hives in the morning and her skin is still damaged from it. Josh had the brilliant idea to use an ACE bandage instead and it worked like a charm!
Friday morning: I called surgery again and left a message that the button was totally broken and we would need a replacement sooner than later and was told the nurse would call me around 8am. I gave KayTar Gatorade and cornstarch to keep her glucose up, but also get her closer to NPO status in case she was going to have surgery. Around 9, nobody had called me, so I called and left a message and marked it as urgent, only because I needed to know if I should keep KayTar NPO or not, it is a dangerous game with a kid who deals with hypoglycemia. Nobody returned my call, so around 10:30, I called again and was in the process of leaving a message when the nurse beeped in. She was SUPER rude at first, "Mrs. 'Tar! That tab breaking is NOT urgent! Unless stomach contents are shooting out of her tube, it is NOT urgent!!" To which I replied, "The internal valve has been been blown since she had this button placed, so YES, stomach contents WOULD be shooting out if I hadn't attached and clamped off an extension tube and secured it to her belly, but that is not the urgent part...the urgent part is that I've only given clears to a child with ketotic hypoglycemia in case she has to be NPO for surgery today." Then she was sweet as pie to me and very helpful. People should not mistake me for an imbecile, honestly. She said to keep KayTar NPO and she would call me back within an hour with more information. She called back and said that KayTar's surgeon couldn't do it, but she had called the on-call surgeon and would call me back as soon as she heard from her. 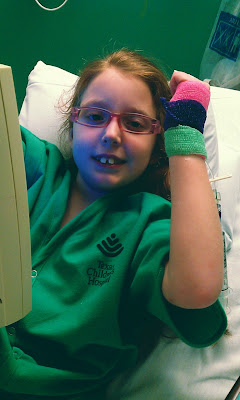 Friday afternoon: A bit after noon, the nurse called me and said the surgery load was light and we could come down and go to day surgery right away. We signed in, went through all the pre-op paperwork and interviews, talked with Child Life (which triggered a very sad little breakdown from KayTar about the gas mask they use), and all of that jazz. During her history, I mentioned to the NP that KayTar had had a possible bad reaction to LR during her sedated MRI (this is important later) and it caused persistent hypoglycemia/labile blood sugars for 24-48 hours. I guess she did not document this in her chart. (hint: foreshadowing )I spoke with the resident and asked him if they could start an IV for her and give her fluids, because her glucose was sitting at 70 which is the bottom of okay for her. He said that they would give her saline and D5, which is exactly what she needs in that scenario, so I thought that was that. (hint: more foreshadowing) In the holding area, KayTar decided that she would rather have an IV that be put to sleep with the gas, so the nurse anesthetist gave her one, complete with a "rainbow fist of power" as KayTar had requested. I got a call shortly after from the vice principal of the kids' school asking if BubTar could stay for detention to finish a delinquent assignment. AGH! For the record, this is not how I had imagined my Friday. Once they took KayTar back, I went back to the waiting area and updated Facebook and watched The Office via Netflix while I waited. She was in and out quick, as usual. 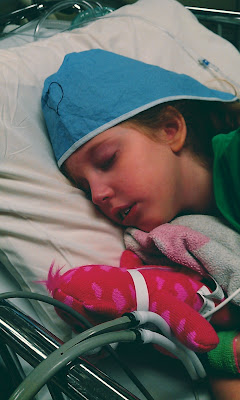 Friday night: When I went to see her in recovery, one of the first things I noticed was the bag of fluids she was connected to....LR! Agh! I told the nurse that she had had a previous possible adverse reaction to LR and he shut it off right away and called the anesthesiologist. Turns out the NP hadn't made a note of it and the resident who was supposed to be in her surgery and told me that he would start her on D5 and saline was not in her surgery, because she was moved to a different OR. The anesthesiologist was very apologetic and from now on I will tell EVERYONE on her case that she shouldn't have LR, so this won't happen again. Thank goodness it isn't a super serious life threatening thing, but crazy blood sugars are no picnic! Her glucose was 71 when she came out of surgery. I gave her 2 ounces of Pedialyte. Her glucose was 69 at the next check. Then I gave her some Sprite. Her glucose was 62 at the next check. WRONG DIRECTION. I gave her 2 ounces of apple juice and it finally came up to 90. I wanted to wait for one more check before we left, and it was down to 80 just 15 minutes later. 80 is a perfectly fine number, so we decided to book it, even though it wasn't looking incredibly stable. I didn't want to sit there all night because of the what ifs. By the time we got home, about 45 minutes later, her glucose was already 60! Unless something is wrong, her glucose stays well above 70. I was able to get it up to 90 again before she fell asleep with a melted popsicle/formula mixture and then I hooked her up to the pump and set it to give her 45ml every hour through the night, so her glucose wouldn't have time to drop. She tolerated it well and it was a perfect solution! Her glucose was 111 in the morning. 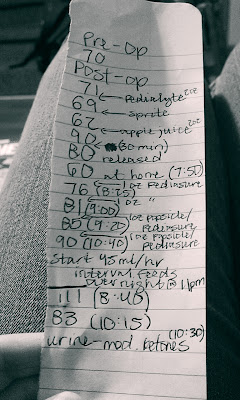 Saturday: We kept her on interval feeds for most of the day and she spent most of the day sleeping...until shortly before we went to the high school for the final run of Oliver! but more on that later... :)
Posted by Kyla at 3:22 PM

Goodness gracious - what a DAY! I am so, so glad they got her in on Monday and go the tube changed out. Yikes about the lactated ringers - but thank goodness she was able to go home (and stay home) that night. And then BubTar gets detention, too - sheesh! Here's to a better weekend this time around (g)!

Glad her surgery went quickly and ended up going well despite the oversight on the doctor's part. And it's a shame the nurse was so rude too. Wow. Like you didn't know your own daughter's g-button status. Seriously.

Doug has to stay on top of the doctors at the ER and make them write things down, especially where I'm hyperchemically sensitive. A doctor once tried to prescribe me a drug that almost killed me. His reasoning was that he cut the dosage in half. Doug explained to him that I was minutes away from having an emergency tracheotomy after taking one dose of the drug when I was twelve. The doctor didn't believe Doug until he offered to get the records faxed over, and a lawyer.