Wednesday was one of those busy kind of days; full day of classes for me, quick stop home for lunch, then off to get the kids...girl scouts for KayTar and musical theatre class for BubTar, at overlapping times, of course! KayTar was super fussy at scouts...she cried 3 times, which is very unlike her! We stayed long enough to complete one activity and then we left at the break to get BubTar to class and because I don't think she could have handled anymore. After we dropped BubTar at class, we came home (which wasn't the best plan, his class is an hour and it takes about 15-20 minutes each way depending on the lights) and KayTar did most of her homework. She was in an oddly cranky mood, just not her normal happy self for some reason. On the way back to get BubTar, she started to look pale and tired, so I suggested she close her eyes and rest. She dozed off a little, I think, but when we arrived she woke up. She said that she couldn't walk and I needed to carry her. She was very limp and let me tell you, it is no easy feat to carry a limp almost 7 year old! My stomach was up in my throat, too, because it was very reminiscent of the onset of her neuro episodes. She perked up a little after we got back to the car, though. It was just all very unsettling. As a side note, BubTar LOVED his class. Theatre is here to stay! We put KayTar to bed early to be safe, even though she seemed okay, and she woke up a couple of hours later, fussing about her eyes hurting. I don't know if the whole afternoon was just build up to a migraine or what, but she quieted down after some ibuprofen and seemed fine in the morning.

Thursday was a totally normal day, but when I picked KayTar up, she was crying. A friend had a Wish You Well letter (when the kids are out sick, their classmates fill a Wish You Well envelope with letters and stickers of well wishes for them to get when they get back) and KayTar thought it was one that she had lost after her absence. It wasn't, but she was sad because she remembered she had lost hers. Anyway, she cried so much that her nose got super snotty and I didn't have a tissue or napkin to give her, and she either forgot how to breathe using just her mouth or elected not to, because she stopped breathing and started turning colors! On top of that, I thought poor BubTar was going to have a heart attack in the backseat with her. We talked her through it and I had BubTar model panting with her mouth and she started breathing again. I know that the worst that would have happened was that she would have passed out and started breathing...but yikes! Where those self-preservation instincts when you need them?

Friday was mostly normal, but there was more uncharacteristic crying at OT, because as she was tracing and cutting out her handprints, they were turning out like "Voldemort fingers"! It was the worst thing to ever happen, evidently. The rest of the day was fine, the weather was nice and we played outside a bit before the boys left to go camping. In the evening right before we were going to leave to go get dinner, she started complaining of stomach pains, climbed into bed, requested her hot pack, and in less than 30 minutes she vomited up her entire last feed and a lot of bacon bits. It looked a little too much like chipped beef to me. Blech! Looks like it might be the return of her gastroparesis symptoms, unfortunately. We took it easy on the food and feeds yesterday and she didn't have any pain, but last night she told me that she was too full for any bedtime medicines or she might throw up. I hope that she hasn't entered back into that cycle of daily or near-daily stomach pain. The Augmentin seems like a stop gap at best and then I don't know what will come next...I'm a bit worried it will cause her quality of like to take a little hit (meds with unpleasant side effects, more time hooked up to feeds, ect), but hopefully not. My fingers will be crossed that she has a great week this week and the weirdness of this week was just a minor bump in the road! 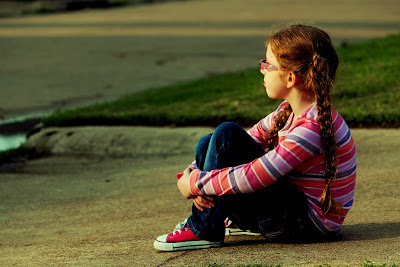 I hope she's doing better soon too. I'm so sorry she's having trouble again. Her physical issues are so inconsistent with her spirit and happiness and how far she's come that it's hard to believe that she's having issues again. I'll be thinking about you guys.

I hate that she had an "off" few days. Hopefully that is all it was! Has she still been having problems this week?

Matt had to carry Adam at one point yesterday when he wasn't feeling well (on his birthday too...boo!) and even he remarked that it's becoming a difficult thing to carry a limp 7 year old!

Really hope KayTar is feeling better both physically and emotionally this week!

And can I also add that I'm so impressed with BubTar and his theater class?! Look at what an outgoing boy he is becoming!