It is true, some doctors are irritating.

I spent the latter half of Friday taking KayTar to her endocrine appointment and acquiring medical records (that the hospital failed to send) for the new doctor she is seeing. The endocrine appointment was frustrating and unnecessary. Endocrine appointments always seem like a bit of a waste now, because KayTar carries a ketotic hypoglycemia diagnosis and they are done searching for an underlying cause. It is basically a check in, which I don't mind, but the attending who came in at the tail end of the appointment was really aggravating. She had never seen KayTar before and clearly had not read her medical records. She came in, observed a normal looking kid with a g-button, questioned me about why she has a g-button (because she has a feeding disorder and her other physicians and I felt it was the best route to ensure she receives adequate nutrition, perhaps?), told me that she probably has ketotic hypoglycemia because of the g-button (she blamed it on dumping, but I don't buy that for a second with KayTar's history, she was becoming ketotic and hypoglycemic before she ever had the tube, we just didn't realize it until we took nutritional deficiencies out the equation with the g-button), and implied that we needed to try to get rid of the button so KayTar's issues would go away. Never mind that the g-button is the lynch pin of this whole "healthy kid" thing KayTar has going on these days. After trying to briefly explain KayTar's history (hearing loss, brain lesions, history of global developmental delays, feeding disorder, ect.) I mentioned that she was seeing a neurometabolic specialist who thinks that KayTar has an underlying metabolic disorder, possibly mitochondrial disease, and she stared at me for a prolonged amount of time...you know, an AWKWARD amount of staring time...then said, "Well, she looks fine to me." Thank you, Dr. I'veNeverMetYouBefore! Clearly, you are more in touch with my daughter's complex case than the other 8 doctors she is followed by! As an endocrinologist, you certainly understand my daughter's GI functioning better than her GI doctor. As a doctor who has been in a room with her for 3 minutes, you definitely understand the complexities of her case more than her pediatrician of 5 years does! Oy. I know I want to be a doctor, but this is the kind of doctor I DON'T want to be...the kind that makes uninformed judgments based on superficial interactions and doesn't listen to the patient/family. Truthfully, it doesn't matter. We all agreed that the plan is to keep doing what we've been doing, since KayTar is doing very well with it, but it was just irritating that she felt that she needed to give commentary on issues that she has a limited amount of information about and are not in her realm of expertise.

I also went by diagnostic imaging to pick up a CD of KayTar's MRIs for her new doctor and they had accidentally burned a second copy...so now I'm the happy owner of my own copy of KayTar's MRIs! Doesn't she have the cutest little brain ever? 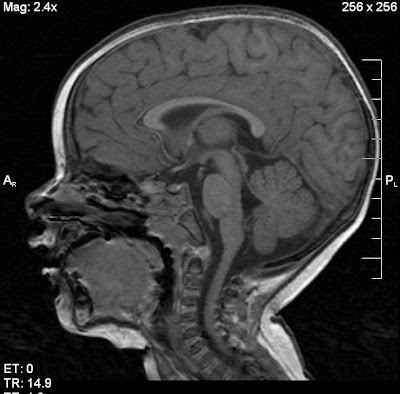 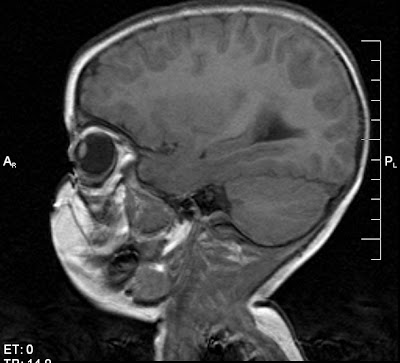 And this is what it looks like when KayTar's brain feels sad... 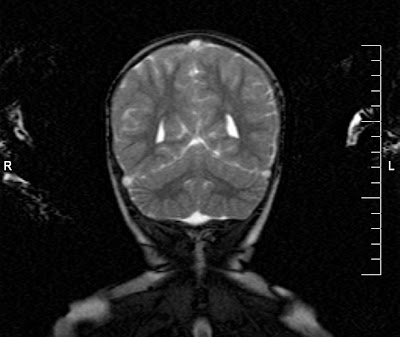 (see its cute little frowny face?)
Yes, I had way too much fun looking at her images on Friday night. I don't know whether to blame it on the premed thing or the parent of a medically-complex child thing...but yeah, I spent my Friday night scrutinizing MRI images. Fun times. ;)
Posted by Kyla at 10:14 AM

Look at those scans! You crack me up, Kyla.

That is a hilarious take on that last scan photo!!

It is so sad, but true about doctors. Such arrogance.

KayTar has the cutest little brain I've ever seen. So expressive!

And that sort of doctor interaction infuriates me. My blood boils. It's beyond arrogant and it's dangerous. (We had a recent bad experience with my mother-in-law, and with her primary, even. We insisted she go to the doctor because of radical changes in behavior, and the doctor was ready to send her home with a "you're recovering from X and Y, it's to be expected that you are tired." In sum, she saw a tired old woman. Happily, my husband was there and pressed the issue, and the doctor had some labs done. Turns out that her sodium levels were getting so low as to be nearly seizure-inducing. She had to be hospitalized the next day, and it took over a week to get her levels stable.)

I'm glad you are going to be a doctor, Kyla. I'm confident that you'll be the good kind.

So many kids "look" fine, but have all sorts of things going on.

Luckily for you, that these doctors are the minority.

I'm irritated on your behalf. I don't think I could have kept my ugly remarks to myself on that one. UGH.

Well of course she looks fine... she's getting nutrition through the tube. duh.

Irritated on your behalf. But love the scans :)

Once again, your experiences are going to make you so good! Did you read article in NY Times today about screening pre-med students for ethical thinking and people skills? You will fly through!

you are the cutest thing ever.

IRRITATING DOCTORS? I had a BARBARIC one yesterday! An anesthesiologist! The nurse finally had to tell her to STOP! And to get her hands off of me, NOW! I have a lot of doctors, and have seen a lot of doctors and have NEVER been treated like that in my entire life.

I don't know quite how to handle it (report her to the hospital, the medical board, or drop it)??!! It was unethical, inappropriate and abusive what I went through!

Hope your all doing well and enjoying your the summer.