When we left for the hospital on Thursday, I was under the impression that the time spent there would largely consist of a semi/unconscious KayTar and a worried/slightly bored me. I packed accordingly. For myself, I packed a novel, sweatshirt, thermos of coffee, deodorant (never go to the hospital without this and a toothbrush, which I forgot and Josh had to deliver to me later), and protein bar. For KayTar, I packed a towel (vomiting on the car ride), her blanket, her medicine bag, and a few diapers. However, we arrived at the hospital, KayTar's episode ended and I was left without entertainment reinforcements.

Child Life came by and left us with a couple of books, crayons, and color sheets...the same ones I deliver to families every Wednesday night. These things are only entertaining for so long. We colored for a bit, I read Duck for President half a dozen times, and we found every item in the Look and Find book. After that, I was on my own, so I invented a few little games.

Materials: Cup, Variety of Crayons
Instructions: Place a random color underneath the cup and have child guess which crayon it is. Give clues, such as, "It starts with the letter O." or "It is the color of our cat." or "It has the same name as a fruit." Try providing different clues each time a color is repeated.

Materials: None, though KayTar liked using my hospital name badge as it looked similar to a notepad
Instructions: Think of a person you both know, then allow the Guesser to ask questions to ascertain your identity, such as "Do you live in our home?" "What is your favorite color?" "Are you a boy or girl?" "What letter does your name start with?"
Variations: Try it with well-known cartoon characters or animals.

Materials: None, though KayTar liked pretending my lanyard was a fishing line and miming the big catch
Instructions: Child pretends to catch a fish. These are not just regular old fish, they have special traits only the fisherman can see, such as a distinct color. Clues are provided, when correct guess is made, fish is placed in a bucket and a new round begins.
Variations: Try having the fish exhibit characteristics of animals, too.

If you have an older child, you can kill tons of time playing Paper, Rock, Scissors and Thumb Wrestling. KayTar also enjoyed playing spelling games aloud, but I know a lot of kids her age aren't spelling quite yet. We also passed time by singing little songs, like the color songs she learned in PPCD last year, or by practicing our counting, first by ones, then by tens. We effectively passed 7 or 8 hours with these little games, without any boredom. There were brief respites on account of medical procedures or tears (poor thing broke down a couple of times because she missed her brother so much), but it made time pass much quicker for both of us. 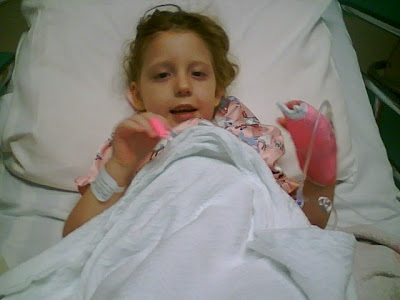 PS: The curse of the Pig Pajamas continues...she didn't wear them to the hospital this time, but she was wearing them when the episode started. I had to change them because they were quite yucky from all that vomiting, as I changed them I thought, "Pig pajamas! Of course!" I should have known they would be keeping us overnight. I've really got to stop buying those adorable pig pajamas.
Posted by Kyla at 10:31 AM

you are so clever. I am terrible at being trapped in any medical situation as my brain is only focussed on escape. I will try these next time.

I was reading the post below to norm emphasizing the part where you 'DROP THE CAR AT VALET' which just blew my mind.

oooh... i might play those on plane trips. good games!

I'm not even kidding...I'm about to put away the computer and play those games with Adam. I think he'll love 'em. Great thinking, mama!

can you come play with me while we're in the hospital next week!?

we need to get her some sock monkey jammies instead

during my last ER trip with a conscious kid, Dash and I played the Dot game for a log time (the one where you make squares out of a matrix of dots, the most squares wins). He's 9, but I guess you could play that with kids quiet a bit younger, maybe not 4, yet, though

that is one sharp mama, you've got there kid. i would be at a total loss.

When Oliver had his tonsils and adenoids removed this past January, I arrived at the hospital armed with reinforcements. I had books, pads of paper and pens, crayons and paper, my iTouch loaded with games, and a small Sesame Street blanket I'd used to cover his legs with in the car. Of all of those things, it was the blanket that we played with the most, and had the most fun with.

There were two other little boys - both of them older - that came in for surgery after we'd arrived and both of them had portable DVD players with them. The one kid had the volume up so loud I actually asked the nurse to speak to the mother about turning it down - I found it quite distracting, especially when Oliver had just come out of surgery and was trying to rest. If only those parents had brought a blanket with them. ;)

You are SO GOOD at this stuff, Kyla! I love the games. May print this post and keep it in my purse ...

These are GREAT games! I am so sorry to hear she had another episode :(