I briefly mentioned that we would be testing KayTar blood sugar periodically, though, I didn't post the details as I didn't have them yet. I know you've all been on the edge of your seat with anticipation, so wait no more! I have the answers you seek. And if you don't seek? Well, I'm telling you anyway.

There exists a theory in which KayTar's episodes are tied to drops in her glucose level, the pediatrician and neurologist both think there might be something to this theory, especially since her last episode was accompanied by a significant drop in her blood sugar and it wasn't the only occassion this happened. Now we are going to track her glucose for a while to see what it is like when she is healthy and her body is functioning properly, when she is sick and her intake is down, and during/after episodes. The bad news is that we're going to keep an eye on it at least through her next episode. The good news is that we are not going to have to do it a set number of times EVERY SINGLE DAY. We need a decent sampling of different types; first thing in the morning, 30 minutes after eating, 2 hours after eating, and then some general checks, too, but I don't have to test her at all of those times every day, which is such a relief.

If I had written this post yesterday morning, it likely would have been full of angst due to the dread I was feeling about poking my wee darling, about how much she HATES finger sticks and named them the WORST thing about the hospital trip (even worse than the cath!). If I had written this post yesterday afternoon, I would have written about what a FIGHT she put up in the doctor's office when we did a test run, about how it took the doctor, the nurse, and myself to get a proper finger stick and reading. I would have written about how her face crumpled when the doctor told her that we would have to be doing this at home for a while, too. (I really appreciate the pediatrician's willingness to explain it all to her and be the bad guy, so KayTar doesn't think we're just torturing her of our own accord.) If I had written this post last night, I would have written that our first finger stick at home wasn't too bad, except for the part where she cried a little and said, so very accusingly, "Mom! You are being LIKE A DOCTOR!" which is likely the very worst insult she could think up.

Though, I am not writing this post at any of those times, so instead I can say that I am very proud of my girl this morning. She agreed to her finger stick, sat still, held her brother's hand, and didn't flinch or cry when I poked her finger. She stayed still while the blood drop formed and while we placed it on the strip. She did a fantastic job! I knew she would eventually adjust, as she has adjusted to everything, but I really didn't imagine she would adjust SO quickly. Yesterday morning it was the worst thing IN THE WORLD, today it is just one more barely noticeable inconvenience in her life. I don't know how she does it, honestly, but it still impresses me. The girl is a trooper. I am bribing her, for the record, mostly because it makes me feel better. She gets a quarter every time she gets a finger stick, which goes into a special bank, that will be used for a shopping trip once she's racked up enough coin. It is a win-win really, I get to feel a tiny bit better about poking my poor kid and she'll get to buy a shiny new toy with the money she has earned with her own blood, sweat, and tears...well, minus, the sweat and tears part, I suppose. 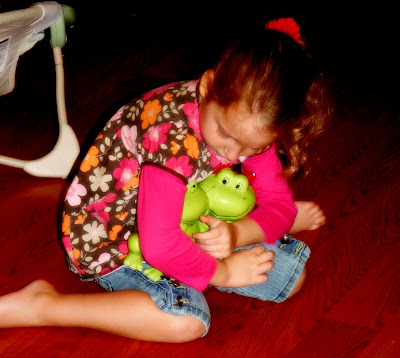 KayTar and her new bank.
Posted by Kyla at 8:20 AM

Kay-Tar,
You are such a big, big girl! I'm so proud of you for not crying. I can't wait to hear about your shopping trip! Meryt and I LOVE to go shopping together! Maybe we can share one of our stories one day!
Love,
Natalie and Meryt

strips on the way and a little present from Auntie flutter.

She is something else, that girl. Go Kaytar!

Smart mama with the bank idea and brave KayTar! :)

Oh, I'm so impressed with Kay-Tar. Good for her.

Have I ever told you about how my brother used to play "doctor"? My parents said he would put one doll on the floor and drop all of his toys on top of it. I'm sure being "like a doctor" would have been one of his top insults, too.

kyla this just breaks my heart, I am so glad your pediatrician took the time to explain the importance of the testing because even though you know how important it is it is still so hard to do.

How do you think she would do with one of the glucometers that will let you test on the forearm and other places than the fingertip? I'm diabetic and those types of sticks don't seem to hurt nearly as much as a finger prick.

I hope the sweat and tears continue to stay away. What a sweet brother Bub is, to help be her strength. I swear those kids of yours are the sweetest around!

You'd never guess it, but I actually kicked my doctor when getting a finger poke once and had to be held down by the nurse. lol