Please read this letter in late March of 2010. By this time, you will likely have forgotten how maddeningly frustrating planning BubTar's mildly disappointing party was this year (2009), the memories of it will likely have been replaced by massive amounts of Calculus, Biology, and Chemistry. To ensure the same mistakes will not be made twice (or three times in some instances), I felt it prudent to send you this message.

First of all, do NOT allow the delightful birthday boy to choose an obscure theme for his party. You've allowed this to happen two years in a row (Bionicles, Ben 10) and made it absolutely impossible to find readily accessible party supplies that stick to the theme. Online suppliers are wonderful, but they also can fall through, leaving you scrambling for a freaking pinata less than 24 hours before the party. March the birthday boy down to Party City and allow him to choose ONLY from the themes at his physical fingertips. Pretend there is no Internet Marketplace. You'll thank me.

Second, do NOT choose an outdoor venue. Yes, it worked out wonderfully in 2008. The sun was shining, the kids ran and played, and the adults were free to have conversations, but in 2009, a great monsoon had just swept through (leaving me/you stranded at a friend's house overnight after Bunco, leaving Josh to make the cupcakes and goody bags all on his own), leaving the park a giant mudpit, complete with pools of water several inches deep. Let's not talk about the mosquitoes, or the way we rushed through the party once we heard thunder rolling in the distance. I don't care what the forecast tells you (like, 80 degrees and sunny!), Future Kyla, don't fall for it.

Third, before scheduling the birthday boy's party, make sure that TWO OTHER CLASSMATES are not choosing the same date and time, or the guest list will dwindle down to next to nothing. He's a good sport, but let's not put him through this situation two years in a row. In fact, you might even contemplate not inviting the entire class, perhaps a sleepover with a few close friends will suffice. I'm sure you are busy with school, so this might save you quite a bit of effort. Order some pizza, rent some movies, and let them go nuts. I'm sure you have studying to do and won't mind being up all night. Use the time wisely. Don't waste the energy on a big bash when he would be equally happy with quality time with his best friends.

Fourth, don't buy a pinata at Target. Just don't. Josh had to slice this one open with a pocket knife to even give the kids a shot at getting to the candy.

God speed, Future Kyla. Give that nearly eight year old a kiss for me. From way back here at seven, I simply cannot imagine him at eight, but I'm sure it will be wonderful. And just so you can recall what seven looks like, I've attached a few photos. 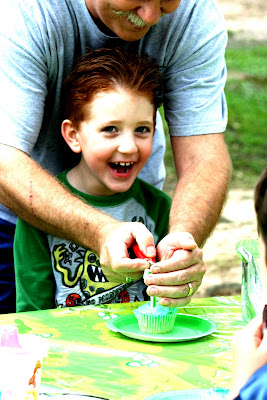 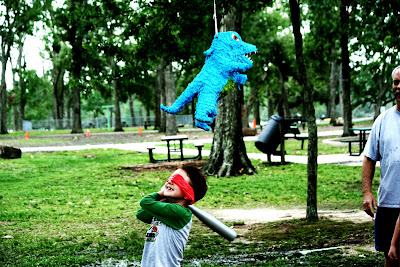 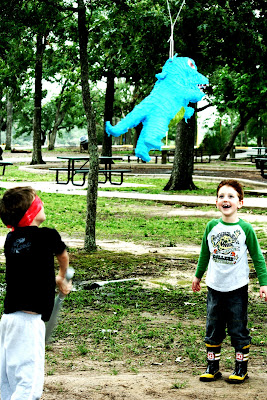 Labels: birthday, BubTar, me, notes to the future

The sad thing is, you've likely only got a couple more parties to plan before he sloughs off the notion entirely. Let's make sure they make you happy as well as him.

I'm forwarding this to Future Katie for reference. BTW, he looks extremely pleased with that concrete pinata so I'm going to assume that despite all of the monkeybusiness, a good time was had by the birthday boy. Plus gutting a pinata is way more fun than gutting a real animal.

but i hear you on the disappointing thing... MQs was kinda like this year, too.

Oh dear. But I love the pinata shot with rubber boots: nothing says party like fishing candy out of the mud, right?

From the look on Bubtar's face, I'd say he had a good time as stressful as it was for you! I was actually thankful this year that Matt accepted our bargain to replace a party with more toys. lol

I love that you wrote yourself this. It is just... Perfect.

Glad to see Bubtar was happy, despite the snafus! :)

He certainly looks happy!! Great job! (even though it was stressful) Next year's plan sounds like a nice change of pace.

Love the letter - and am taking advice from it as well :) Glad it was fun despite the setbacks!!!

Uh, at least the birthday kid was ridiculously cute right?

He is over the top cute! You may have suffered through the planning, but pictures show a very happy Bubtar! Love your letter though, super creative and fun.

This was great, Kyla. What a good daddy/hubby Josh is, baking cupcake the night before?! Wow.

It may have been a hectic mess, but Katie is right...that birthday boy is RIDICULOUSLY cute!

(And where did you get his shirt? Adam would love it!)

You give yourself some pretty darn good advice. I hope you listen to yourself. (Maybe I should also take notes.)

BubTar looks happy and handsome, though! And great photos are probably just as good as great memories.

Looks like he had a blast, though, even with the ups and downs!

I have never met a pinata that didn't require surgery to free its sugary bounty.

He does look blissful in the picture. WE worry about these things more than the kids do, I think.

I laughed aloud at this. Good advice!

It might have been stressful for you, but he looks awfully happy in the pictures. :-)

Aw! Poor little guy!
The Boy has never, ever had a birthday party that didn't peter our to next to nothing, thanks to his mid-January birthday. This year, we just invited the whole class, which resulted in a much more robust crowd.
The Girl does not want a party this year! Yikes.

Great photos! And, for the record, the movie sleepover parties are some of my fondest memories from childhood.