BubTar has just been knocking my socks of recently and I about to burst if I don't do a bit of bragging.

He is in kinder this year, if we were in Canada it would be senior kindergarten, in case you all were wondering. He is a five year old, an April baby, so he is one of the younger kids in his class, although not the youngest.

At his school, they learn to write in cursive in Kinder. Well, he started it last year in PreK, but it was not for "mastery" only for exposure. In the last two weeks, the handwriting sheets he has brought home are just blowing me away!

He writes so neatly for being a kindergartener! Heck, he writes better than Josh does as an adult. ;) I'm just so impressed with the work he is bringing home. He recently had his first quarter tests, and he made 100's in every area, except for number writing, his 3 got away from him and he ended up with an 80 (only 5 numbers, so 20 points a piece, EEK!). Still completely impressive, though.

They have not yet started reading groups, that will begin later this month, but yesterday at the library, he selected the following books (because he likes camping and he likes books and bugs):

The first was chosen off the first grade Accelerated Reader shelves. It includes words like "specimen" and "science" and "studied", and he is reading it to me with very little assistance. I have to help him sound out a word per page, maybe. The second book is a touch easier and he takes it in the car to read, because he can do it without any help for the most part. If he does need help, he can just spell out a word for me so I can help him sound it out that way. They are both level two readers, for kids in 1st-3rd grades. He is in kinder! And they haven't started reading in class yet. He's really doing amazingly with it. The last book was his choice for a science-related book. He's been choosing a I Spy book each time we go to the library, but this time I suggested trying something new, like science? And he was excited and shocked. "They have SCIENCE BOOKS HERE?!" Science experiments are the highlight of his school week, so taking home a science book sounded like heaven. He didn't know how to choose. So I named a bunch of different science related subject areas and he chose insects. We pulled 4 or 5 books off the shelves for him to peruse and he finally decided on this one for a starter. Next trip, he's already got his eye on another. He was reading this one out loud to me on the way home from the library. His favorite new fact is that Moving Leaves sometimes take a bite out of each other because they look so much like real leaves!

Although he is all boy, in the way that he can be out of hand just like the rest of them, he is really doing so well in school. At our parent/teacher conference, his teacher said that his only difficulty in the classroom is staying on task or focusing properly. She said that although he struggles with this, it is not affecting his school work or his ability to retain the information that is given in class. I wonder if some of that is genetic. I cannot sit still during a lecture to save my life. My knees bounce, my hands fidget, I write song lyrics in my notebooks...but at the same time I am retaining every bit of what I'm hearing. If I were to force myself to sit still, I wouldn't hear a word of what was being covered because I would be too focused on making myself be still. Like Josh as a school ager he can be a bit of a troublemaker, but nothing serious most of the time. We are both so proud of the big kid he is becoming. 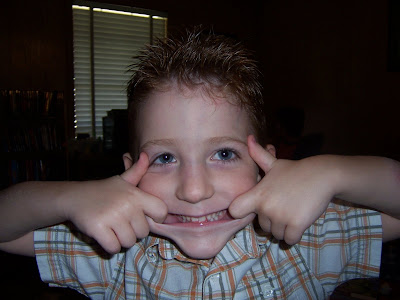 Yay Science! I'm all giddy over that book choice.
He is so adorable.

There are some really great junior science books out now, like the "Let's Read and Find Out" series and some Cat in the Hat ones. And also - for you to do together, some fun 'kitchen science" ones about experiments you can do with stuff you'd just have around the house. Great for a rainy day with no plans.

He is doing *amazingly* well! You have every right to be proud. Unfortunately, your pix didn't come up for me.

Yeah BubTar! Keep up the good work. I like your new banner as well.

Good job BubTar!!! You should be very proud of him!! Those are significant accomplishments!! And that picture - priceless with that caption. Have a good Sunday - see ya.

He's worth all that bragging and more

WAY TO GO BUBTAR!! Brag away Kyla!! I love hearing such good stuff!

Go Bub! What a smart boy!

Every now and then us teachers forget that students need to MOVE... there are some days that as lunch approaches, I'll realize that my students haven't been to the carpet yet because we've been so busy doing other things. I don't know many adults who can sit at their desk for almost 3 hours!

Wow. He is one smart little guy!

Ain't nothing wrong with a little bragging.

(Love the new header! You should brag about that too.)

That sounds WAY advanced for 5. Yay Bub!!! I love any brags on your kids.

I hope Easton grows up to be like BubTar. That kid is one impressive little dude with an absolute heart of gold!