Overheard in the 'Tar house

KayTar walks in, mildly pouting, and stops in front of me.

translation: I'm sad because I don't want to go to bed.

That was a because statement! HUGE! Huge, I tell ya. That is a first for her. It still had a bit of that halted feeling of mimicry, she hears BubTar say this same thing almost nightly (pout and all, man, BubTar has the pouting down pat, always has), but even so, VERY advanced for her.

This morning she woke up early and was having a lot of eye pain, so I went in to snuggle her. I laid there for a while and then said, "Mommy is going to make her coffee." and she said, "Coffee? Yes or no? NO! No coffee, Mommy. Way down a KayTar." So we snuggled a while longer, until I was finally drifting off to sleep beside her and then I felt her small hand on my leg, "Come on, MomMom! I show you somesing....FUNNY! Come on, wes go. Cho-nch you? Cho-nch you see funny?"

Isn't that clever? It felt spontaneous, motivating me with the promise of funniness to get me to wake up and follow her. I think it was. Who knows, really. Her capacity to memorize is so far beyond anything we can keep track of, we never really know what is spontaneous speech. She says certain things over and over that have clearly been retained from something other than us and for the life of us we can't place it. One of which is toasting and saying "No worries!" she is doing that constantly, but we have no idea where it came from. Sometimes she also shouts, "Give me presents!" but she hasn't a clue what it means. She knows what presents are, but in the context of that sentence, there is zero comprehension, it isn't 3 separate words, it is ONE phrasing. It just sounds nice to her ears, I think, so she says it. The first time she said it, I replied, "Where did you learn that?" So now she shouts, "Give me presents! Where you learn dat?!" There are a million more that leave Josh and I shaking our heads saying, "Where did she get that?" on a daily basis. I don't think we'll ever figure them out,but that's just KayTar.

If she was an animal, she would be a parrot, for all the obvious reasons. Poor BubTar only really gets bothered by her when she is copying him relentlessly, which unfortunately is a daily occurrence. When Josh gets home from work, KayTar stands right next to BubTar while he talks about his day, she mimics everything, hand movements, body language, facial expressions and she stays only a half beat behind him. They are almost in sync. I've got to video it one of these days. It isn't limited to that, though, she probably spends half their time together studying and copying him, which to a five year old can get old fast, I'd imagine. He's a sport about it usually, unless he's trying to concentrate. We split them up if it starts to grate on his nerves, but there are times we can't help it, like in the car. We do what we can, though.

Even so, I do feel like we are hearing more spontaneous speech from her, especially during imaginative play. Last night she named my mother's Christmas tree lights after Sonic characters (Evidently little girls with big brothers absorb these interests, especially our little parrot) each colored light represented the corresponding colored character. Her pretend play is so fun to watch. She seems to be able to find her own words in those scenarios much more easily than when she is interacting with others. I'm not sure why. We are seeing change and growth daily in her speech, though, and it is really exciting to watch. 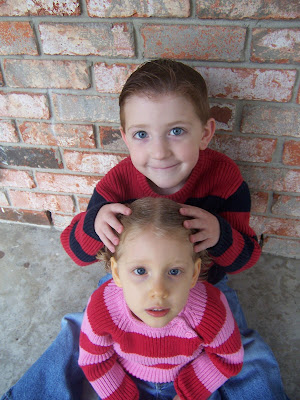 The BubTar and his shadow.
Alternately titled: The parrot and her Muse.


PS (largely unrelated and mostly for my recording purposes):
She sounded out the word "cooperation" at therapy yesterday when her therapist asked her to read a sign, "co-ooper-AFUN!" And this morning she sounded out "pregnant", "pre-n-ant". Not 100% correct, but DUDE. It blows my mind. Every time.
Posted by Kyla at 8:44 AM

Possibly mimicry but, a relevant point is that it was said and done appropriately. I know that doesn't mitigate the mimicry completely, but boy, it's something, isn't it?

And I understand from KayTar but oh my POOR BubTar! It rankles Patience endlessly to get copied by Persistence (who does it b/c that's the age and stage and then continues it b/c it pisses off her sister). So daily would probably result in Mass Chaos here (and how that wold be any different I'm sure I don't know).

There was definitely no mimicry when she was talking to you in bed, don't you agree? And the 'no bed' thing was timed appropriately - so...maybe copying, but with proper intent?

She is really changing - just in the few weeks I've been following your journey, she seems to have made enormous progress.

And she is a lucky girl to have such a patient big brother!

She's making so much progress. Before you know it, she's going to be proofreading your blog posts for you!

And I think you nailed what I was getting at, even if it is some mimicry, it is being used with proper intent which is HUGE.

2. Better. It was painful for a while this morning and we're been experiencing REM, but (random eye movements) except she is awake. LOL.

One more thing, she does do TONS of spontaneous speech (like the coffee talk)..but conversational speech, mimicry is her crutch. I have such a hard time painting it accurately, it either comes across totally abnormal or totally normal depending on which type I am talking about. It is hard to paint it altogether. If you hung out with us for a day, it is easier to see. LOL.

Wow...I love her "Yes or no?" like you do to her...but she answered for you!!! And the promise of something funny? I love it!

You know what I love? How utterly evident the love between them is in that photo. Clear as day

loving the photo...and the titles.

and the idea that, in time, they make their way to communication. yay for KayTar.

Bubtar is the coolest big brother! I can't see Matthew dealing with that for too long. He has no patience! Kaytar is ALWAYS blowing my mind!

I've been out of the loop for a bit. But I read you past few posts.

Those two realy love each other don't they?

She's such a cutie.

you know, she blows my mind, too.